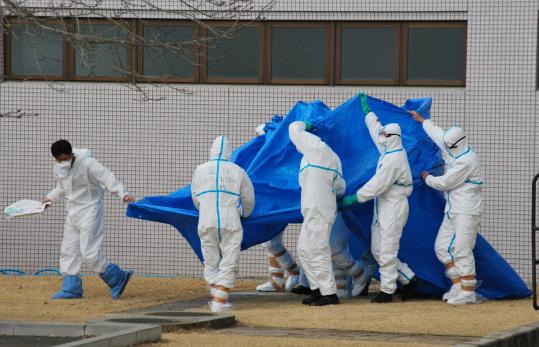 TOKYO — New signs emerged yesterday that parts of the crippled Fukushima Daiichi nuclear plant are so damaged and contaminated that it will be even harder to bring the plant under control soon.

At the same time, Japanese officials began encouraging people to evacuate a larger band of territory around the complex.

Speaking to a national audience at a news conference last night, two weeks after the magnitude 9.0 earthquake and the devastating tsunami that followed it, Prime Minister Naoto Kan dodged a reporter’s question about whether the government was ordering a full evacuation, saying officials were simply following the recommendation of the Japan Nuclear Safety Commission.

“The situation still requires caution,’’ Kan, grave and tired-looking, told the nation. “Our measures are aimed at preventing the circumstances from getting worse.’’

Authorities said that they would assist people who want to leave the area from 12 to 19 miles outside the plant, and that they were encouraging “voluntary evacuation’’ from the area.

Those people had been advised March 15 to remain indoors, while those within a 12-mile radius of the plant had been ordered to evacuate.

The United States has recommended that its citizens stay at least 50 miles away.

“The state of the plant is still quite precarious,’’ Kan said. “We’re working hard to make sure it doesn’t get worse. We have to ensure there’s no further deterioration.’’

One sign of possible deterioration came at Reactor No. 3. Workers who were trying to connect an electrical cable to a pump in a turbine building next to the reactor were injured when they stepped into water that was found to be significantly more radioactive than normal. Officials and specialists offered conflicting explanations of what had gone wrong — but all pointed to greater damage to the reactor’s systems and more contamination there than officials had indicated earlier.

Two workers were exposed to radiation and burned when water poured over the top of their boots and down around their feet and ankles, officials said. A third worker was wearing higher boots and did not suffer the same exposure.

Like the injured workers, many of those risking their lives are subcontractors of Tokyo Electric who are paid a small daily wage for hours of work in dangerous conditions. In some cases they are poorly equipped and trained for their task.

The National Institute of Radiological Sciences said that the radioactivity of the water that the three workers had stepped into was 10,000 times the level normally seen in coolant water at the plant. It said that the amount of radiation the workers were thought to have been exposed to was two to six sieverts.

Even two sieverts is eight times the new 250-millisievert annual exposure limit set for workers at Daiichi in the days after the disaster; the previous limit was 100. Tokyo Electric officials said that water with an equally high radiation level had been found in the Reactor No. 1 building, the Associated Press reported.

Skin exposures of two to six sieverts will cause severe burns, according to Dr. David J. Brenner, director of the Center for Radiological Research at Columbia University. But if those doses reach the entire body and not just the skin, “you’re at a very high risk of dying,’’ he said.

At a dose of four sieverts, half of the people exposed will die, Brenner said. But he said that from the information that had been provided, it was not clear whether the dose to the workers reached their skin only, or penetrated their bodies.

The news yesterday and the discovery this week of a radioactive isotope in the water supplies of Tokyo and neighboring prefectures punctured the mood of optimism with which the week began, leaving a sense that the battle to fix the damaged plant will be a long one.

No one is being ordered to evacuate the second zone around the plant, officials said, and people may choose to remain, but many have already left of their own accord, tiring of the anxiety and tedium of remaining cooped up as the nuclear crisis simmers just a few miles away. Many are said to be virtual prisoners, with no access to shopping and immobilized by a lack of gasoline.

“What we’ve been finding is that in that area life has become quite difficult,’’ Noriyuki Shikata, deputy secretary for Kan, said. “People don’t want to go into the zone to make deliveries.’’

Shikata said the question of where those who chose to leave would go was still under consideration.