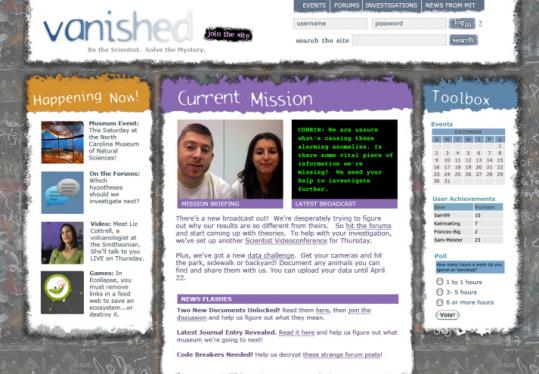 Middle schoolers across the country will have the chance to become detectives in two weeks. Scientific detectives, that is.

On April 4, developers at MIT and scientists at the Smithsonian Institution will launch a website called Vanished that will enable middle schoolers to help solve a mystery surrounding an environmental disaster.

The students will be asked to collect data, conduct research, consult peers, and draw conclusions as they try to figure out what happened, and why.

Every week for eight weeks, they will be given another clue and access to new games that will help them achieve an understanding of scientific concepts they will need to solve the mystery.

“You’ll think of this like a television series like ‘Lost.’ There’s a big reveal every week, and everyone’s jumping on the forum as soon as the episode is over and typing and trying to figure out what actually happened, looking for clues,’’ said Caitlin Feeley, a project manager at the Massachusetts Institute of Technology who has been working on the website for the past two years.

Feeley and the other designers aim to excite middle-school students about science so more of them will consider pursuing scientific careers.

The project won praise from James D. Rooney, vice president of the Massachusetts High Technology Council, a group of business executives who focus in part on science education and workforce issues.

“Increasingly, at a young age students are online and on iPhones and interacting with each other electronically, providing more options for them to do things that can only further their intellectual curiosity,’’ he said.

In the summer of 2009, the Smithsonian Center for Education and Museum Studies approached MIT’s comparative media studies program regarding a new way to reach audiences across the country.

That August, they received a $1.5 million grant from the National Science Foundation, and by the following January a team of about 30 people, including MIT developers, undergraduate and graduate students, and Smithsonian scientists, had kicked into full gear to create a mystery and provide students with the tools they would need to solve it.

The topics will cover astronomy, ecology, anthropology, paleontology, and volcanology.

A Smithsonian National Museum of Natural History anthropologist, Kari Bruwelheide, who helped with research on the project, will serve as a mentor for students during the game.

In May, when clues must be solved with forensic anthropology, students will be able to ask her questions via online chats. She will also post videos about why she loves to work with human skeletons, and how that makes her a detective.

Bruwelheide, who does not know the outcome of Vanished, will be logging on with her 13-year-old daughter, and they will work together to solve the mystery.

“I’m anxious to get on there and look once it launches; we have some really cool 3D imaging and I’m excited to see how the players will respond to that,’’ she said.

MIT developers said they are open to the idea of working with Boston schools in the future, Feeley said.

Pamela Pelletier, director of science for grades K-12 in Boston’s public schools, said the website has the potential to provide a stimulating element for an after-school program and attract students to science.

“Anything that is grounded, well researched, and accurate via technology can only help us and bring more interest to us so kids start asking questions,’’ Pelletier said.

Vanished was formatted like a game in order to show that failure is OK in science.

“You fail on a game lots of times on your way to succeeding, and then you actually gather the evidence you need from your failures. So we see that kids are more naturally drawn to it,’’ said Scot Osterweil, a creative director of the education arcade.

The group is already at work on improving aspects of the game for sequels, including graphics; having more ways of accessing the game through mobile technology; and perhaps becoming international, said Stephanie Norby, director of the Smithsonian Center for Education and Museum Studies.

Ultimately, the developers hope they can get middle-school students comfortable with learning how to think scientifically.

“We thought how great it would be to get kids to understand that doing science is more like solving a mystery than memorizing the parts of the cell and then coughing it up the next week on the test,’’ Feeley said.

“You don’t need to be the smartest person in your class to be a scientist.

“Really, it’s about having good problem-solving and communication skills and a natural curiosity.’’

Registration for the game will open March 21 at the website vanished.mit.edu.

(Hint: There is a code in the bottom left corner of the screen.)

Alli Knothe can be reached at aknothe@globe.com.