Is your social life extra full? A big amygdala may be why 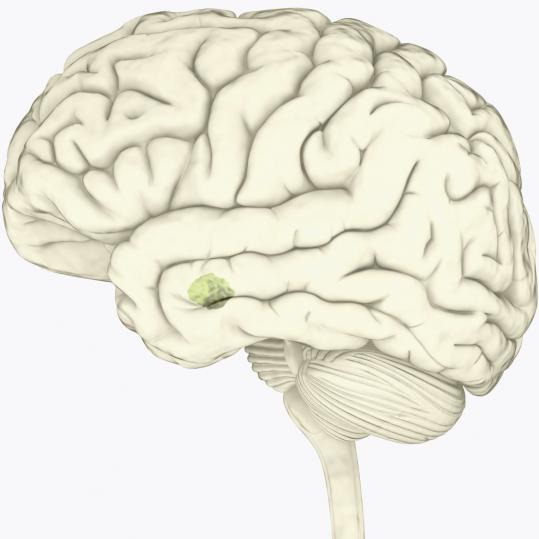 Social butterflies don’t just have more friends than other people; a study finds that deep within their brains, they also have a larger amygdala — the almond-shaped structure that has long been known to play an important role in emotions.

The research is basic science, but could eventually have practical implications in a society obsessed with expanding personal and business social networks, whether online or face to face.

“As the importance of the amygdala emerges for social interactions and maintaining large social networks, we can ask how does it do that,’’ said Lisa Feldman Barrett, a psychology professor at Northeastern University and senior author of the study, published in Nature Neuroscience.

“Hopefully, that can translate into the development of interventions that can help people be more successful,’’ she said, especially when they make major transitions in their lives — such as moving into a nursing home.

“The ability to go to a brand-new place and meet brand-new people and remember who they are and be a good judge of character turns out to be an important thing for a large segment of our population now, as old age is playing out in a different way than it used to.’’

The study examined 58 adults, between 19 and 83 years of age, using brain scanners and a survey that measured participants’ social networks. Researchers found the size of other brain regions was not correlated with the size of the social network.

Ultimately, Barrett and colleagues are interested not only in correlating amygdala size with the extent and complexity of a person’s social network, but in understanding more about the role the amygdala plays in social behavior and relationships — both in normal people and in those suffering from disease.

In unpublished work, Barrett and colleagues have studied the amygdala in patients with Alzheimer’s disease. The memory loss of the disease has drawn much attention to the hippocampus, a structure in the brain that is central for memory and is smaller than it should be in people suffering from the disease. The unpublished study found, however, that the amygdala shows the same degree of shrinkage in Alzheimer’s patients.

Dr. Nicholas Christakis, a physician and professor of medicine at Harvard Medical School, said the study on amygdala size and social networks is a preliminary but intriguing illustration of the relationship between people’s social relationships and brain structure.

Christakis has been studying whether there is a biological basis to our social networks by scrutinizing genes and social connections.

What’s uncertain in the current work, he said, is whether the size of the brain structure determines people’s social networks, or whether having a large social network might feed back and affect the amygdala.

There is already evidence of the brain’s ability to change.

A study of London taxi drivers, for example, found that a portion of the hippocampus thought to be related to spatial navigation was larger in the cab drivers than in other people. The size was correlated with the number of years of driving experience: more experience, larger brain region.

Barrett is seeking grant funding to dive deeper into the question of how the amygdala’s size may be either driving social connections or reinforced by them. She hopes to follow a large group of people over years, to try to measure changes in the size of the amygdala and a person’s social network. She also hopes to examine its function by monitoring the brain region’s activity during different tasks that might be important for maintaining a large social network, such as recognizing a face a person has seen before and remembering contextual information about a person.

Robert Barton, a professor of evolutionary anthropology at Durham University in the United Kingdom, has studied amygdala size and social groups in nonhuman primates.

“What we don’t know is whether the differences are innate,’’ Barton said. “So that if your brain is innately predisposed to facilitate many social relationships. . . . Or whether having lots of friends impacts on your brain.’’