Solar tech advances may be key to competing with China 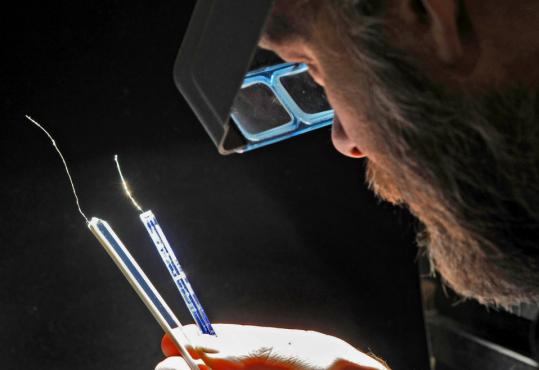 Inside a cavernous industrial building in North Billerica, the employees of Stellaris Corp. have built three plywood rooftops.

Each peaked roof rolls on wheels so it can be easily moved, and each is being used to test a new kind of solar panel Stellaris is developing. The panels are encased in a specially designed plastic that better directs sunlight to the electricity-producing photovoltaic material inside. Stellaris, which has raised $6 million from investors so far, says its panels require less of the photovoltaic material than others, which reduces costs. And they also slide together like the leaves of an extra-long dining room table, with pegs and holes in their sides, to simplify installation.

But Stellaris, with 11 employees, is trying to bring innovative solar technologies to market at a moment when China seems bent on producing the world’s cheapest panels by using old, already-proven technology — and by doling out massive government subsidies. “The Chinese companies have taken commodity manufacturing processes and squeezed the heck out of the cost,’’ says Hemant Taneja, a Cambridge venture capitalist who has invested in several solar companies. “It has made them extremely competitive.’’

When Greentech Media, a Cambridge-based research firm focused on renewable energy, issued a report last month looking at the world’s 15 most successful producers of solar panels, it found that eight were based in China (including numbers two, three, and four on the list). The bulk of China’s growth happened in 2008 and 2009, said Shyam Mehta, who wrote the report.

“The cost of capital there is so cheap,’’ Mehta explains, “and the labor costs are lower by a factor of at least five. So their profit margins don’t need to be as high as others do.’’

One role that New England companies will clearly play is the “picks and shovels’’ providers to companies making solar panels in China (and the rest of the world). Already, selling equipment to the factories that make solar panels is a big business for companies like GT Solar Inc., , and , whose offices are across the street from Stellaris’.

“When we started GT Solar, our first customer was in Norway, and our second was in France,’’ says Kedar Gupta, founder of the Merrimack, N.H., company. “But then things moved to Taiwan and China and Korea. And the Chinese manufacturers weren’t placing small orders with us. Our first Chinese customer bought $300-million-plus of technology from us. The Chinese all had very big projects in mind, and slowly they started succeeding against the European and American companies making solar panels.’’

GT Solar, founded in 1994, now has offices in Beijing and Shanghai. Last year, the company logged record revenues of $544 million, with 62 percent of that coming from China. (The company’s most recent annual report was written in both Mandarin and English.) The company’s two main products are the reactors and furnaces that are used to turn raw silicon into the silicon wafers used in solar cells to convert sunlight into energy.

One of the highest-profile companies to try making solar power products in Massachusetts, , had an impressive initial public offering a decade ago. The company’s shares priced higher than expected, and closed the first day of trading at $19. Today, you can get them for under a buck, a problem for the Marlborough company if it hopes to keep its listing on the Nasdaq Global Market, which requires a minimum share price of $1. Last year, Evergreen began shifting some manufacturing work out of Massachusetts to contract manufacturers based in China.

Another New England company, Konarka Technologies Inc., has raised nearly $200 million and purchased an old Polaroid plant in New Bedford, but hasn’t yet shifted into high-volume production of its flexible solar panels, which can be integrated into products like awnings, backpacks, and umbrellas.

To compete with low-cost Chinese manufacturers, New England start-ups will need to come up with truly breakthrough technologies to make solar materials much more efficient at converting sunlight into electricity, or new manufacturing processes perhaps using automated assembly lines that don’t rely as much on workers. “I absolutely think that the panel that winds up on your roof or your business in the next decade could be made in the US, instead of China,’’ says Taneja, a venture capitalist at Cambridge-based General Catalyst Partners. “But the key is making giant leaps, not small incremental improvements.’’

One company, 1366 Technologies Inc. in Lexington, was cofounded by the same MIT scientist who helped start Evergreen. 1366 hopes to introduce design innovations into the existing way of making silicon solar wafers, the key component of a solar panel. One, which gives the wafer a surface that looks like the edge of a serrated knife, is better at capturing sunlight, the company says. Another innovation cuts the amount of silicon wasted in manufacturing. Last month, 1366 raised $20 million in funding. Chief executive Frank van Mierlo says 1366 can produce wafers at half the cost of Chinese manufacturers and even envisions making them in the United States and shipping them to China for integration in finished solar panels.

But other local start-ups trying to bring new ideas to the industry, like Solasta Inc. and Wakonda Technologies Inc., haven’t been able to stay alive long enough to get products to market. Taneja, an investor in Woburn-based Wakonda, says the company wasn’t able to get its technology working well enough, fast enough to convince backers to keep putting money in.

Gupta, the founder of GT Solar, says that as an entrepreneur he is optimistic about the role US companies can play. But China’s government incentives, along with a currency that is not allowed to fluctuate freely, can make it tough to compete.

Mehta, the analyst, points out that even if Chinese-made panels end up dominating the market, “roughly three times more jobs are created in the installation of panels than in the manufacturing. When people talk about job creation, I actually think manufacturing is a red herring.’’

New England companies don’t seem likely to abandon their quest to create important new products in the solar field. Last month, MIT convened a closed-door meeting of about 50 professors, investors, and entrepreneurs, including MIT president Susan Hockfield, to talk about how the university can help build the region’s clean-technology ecosystem. “One big question,’’ says Peter Rothstein, executive director of the New England Clean Energy Council, “was how we can help companies grow and scale here.’’

Stellaris is hoping to do just that. Chief executive Jim Paull is out trying to raise a new round of funding to get a pilot production line up and running. Paull says it may only be two or three years before solar panels from his company and others can produce electricity at a price that is competitive to buying power from a utility. That could lead to American-made solar panels on millions of American rooftops.

“Our bet is on technology innovation,’’ says Paull. “That’s how you combat a commodity like Chinese-made panels.’’