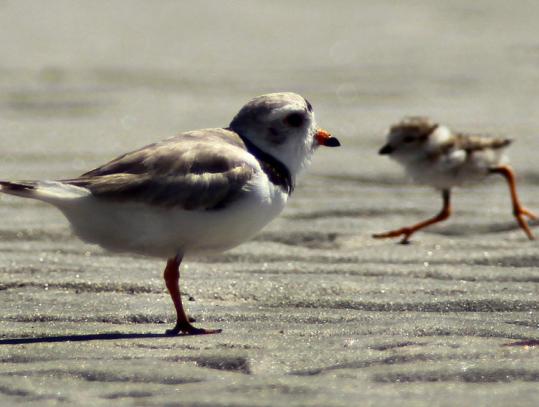 A Plymouth-based conservation agency dedicated to protecting shorebird populations will lead a comprehensive survey of the threat posed by the Gulf Coast oil spill to shorebird recovery efforts.

Typically long-distance migrants, many shorebird species spend time in the gulf nesting or fattening up for northward flights before paying visits to South Shore beaches.

The nonprofit Manomet Center for Conservation Sciences was chosen by the US government last week to lead the $3 million federally funded survey that will guide recovery efforts for birds such as piping plovers, red knots, and sandpipers. It’s one of the largest environmental damage assessments ever conducted for shorebirds.

More than 30 species of migratory shorebirds depend directly on the Gulf of Mexico’s diversity of food sources and rich coastal habitats to sustain them during all or part of their life cycle, according to the Shorebird Recovery Project. Among these are species at risk of extinction such as Wilson’s plover, semipalmated sandpiper, and American oystercatcher.

To conduct the seven-month survey, the center will work with other national conservation groups such as the Gulf Coast Bird Observatory and the Coastal Bird Conservation as well as Entrix, a natural resources management firm representing BP. It was an explosion on BP’s oil rig Deepwater Horizon five months ago that resulted in the oil spill that fouled gulf marshes and beaches where migratory shorebirds nest and feed.

Following the catastrophe, the Manomet Center took part in wildlife rescue efforts by drawing on its detailed species conservation plans to map priority sites for shorebirds on maps. Wildlife rescue workers on the ground used these maps to build barriers and take other measures to protect those places from the oil slick.

Shorebird specialists said the spill came at a bad time last spring because some species had just begun nesting and raising chicks along the Gulf Coast. Measures taken to help the recovery of shorebirds nesting in the gulf include working with farmers in the Mississippi migration corridor to maintain water on their lands at levels attractive to shorebirds in fall.

According to the center, some shorebird species affected by the gulf spill also rely on the Massachusetts shoreline — some for stopovers on long migration flights, others to stay and breed. The piping plover, a small, buff-colored bird that nests on Plymouth and Duxbury barrier beaches and was considered at risk before the spill, is threatened with extinction, experts said.

This fall, piping plover and other shorebirds will head back to the gulf, where they may face habitat loss and diminished food supplies.

The loss of adult birds to oil-degraded habitat would be an especially big blow to shorebird species that breed slowly, such as the American oystercatcher, a big black and white bird with an orange bill. Oystercatcher pairs nest in summer on Duxbury Beach as well as on Boston Harbor Islands, according to the Shorebird Recovery Project.