To its critics, fast-growing modified salmon is a threat; to its Mass. creators, it is a fix to shortages and overfishing 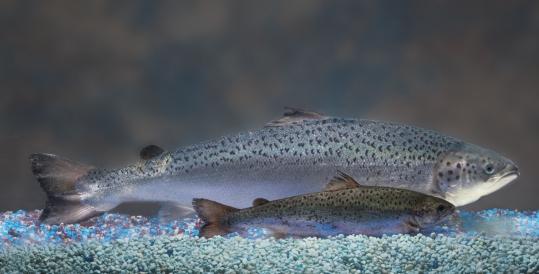 At the center of a controversy over whether genetically modified salmon should be sold for consumption is a tiny Waltham company that has spent 15 years and $60 million working on the project.

AquaBounty Technologies, using a growth hormone gene from the Chinook salmon, has created an Atlantic salmon that grows twice as fast as the conventional fish. It reaches full size in about 18 months, rather than the standard three years.

Earlier this month, the US Food and Drug Administration proclaimed the fish safe to eat, and public hearings took place this week. Opposition was swift and vocal. Critics say it poses risks to consumer health and the environment. They rallied in front of the White House, and a coalition has gathered more than 170,000 signatures in protest.

AquaBounty’s cofounder, Elliot Entis, tells another story, one of a product that could help address future food shortages and reduce the pressure on wild fish stocks.

It is a product that might not exist if he had not happened to read the newspaper one day. He grew up in Dorchester, attended Harvard, spent time in Washington, D.C., and returned to the Boston area to help run his father’s seafood business. One day, he stumbled upon a New York Times story about antifreeze proteins. He became interested in the topic and started a company in 1991 to explore their potential for freezing and storing organs for transplantation. It was only later that their application in fish became clear. In AquAdvantage salmon, the growth hormone is spliced with part of the antifreeze protein gene of another fish, the ocean pout.

“I wasn’t looking for it,’’ Entis says. “I thought it was great, fish grown in half the time.’’

He led the first rounds of financing himself. Shareholders now include private equity fund Linnaeus Capital Partners; Alejandro Weinstein of the Chilean pharmaceutical company, Recalcine; and the Fairchild Corp. The company employs 24 people. Headquarters are in Waltham, and eggs are grown in Prince Edward Island and Panama.

“You don’t get people to risk cash on what’s inherently an edge-of-the-envelope venture with no hope of return any time soon, [unless they] think it’s really a good idea and want to be part of it,’’ Entis says. “It’s a way to help feed people and decrease the footprint of aquaculture on oceans. I know some people when they hear or read that are going to be cynical, but it’s really quite the truth.’’

The world population is expected to increase to 9 billion by 2050, according to United Nations estimates. A fast-growing source of protein could help ameliorate future food crises, says AquaBounty’s chief executive, Ronald L. Stotish.

The genetically engineered salmon are grown inland, rather than in the ocean pens often used in salmon farming.

Stotish says this means farms could be built closer to population centers, creating industry and reducing the environmental impact of transporting the fish great distances. And, he adds, a faster-growing supply of farmed salmon will help take pressure off wild fish.

As for the benefits of AquAdvantage salmon for fish farmers, they are clear: The faster the growth rate, the sooner the fish can be sold, and the lower the feed costs.

Critics vehemently dispute many of AquaBounty’s arguments. There are other ways to provide food for future generations without genetic engineering, they say.

Paul Greenberg, author of “Four Fish: The Future of the Last Wild Food,’’ suggests that rather than using genetic engineering to boost supply, people should instead work to preserve existing wild salmon stocks by halting the proposed Pebble Mine in Alaska’s Bristol Bay. Doing so, he said, would save roughly as much salmon as AquaBounty’s genetic engineering would add to the food supply.

Another strategy might involve promoting species such as Arctic char that may be more naturally suited to aquaculture.

Critics’ health concerns include potential allergic reactions, a risk deemed statistically insignificant by the panel at the FDA hearings. Consumer advocates want the fish to be labeled genetically modified, a step that AquaBounty says is unnecessary.

Environmental groups also say there is too great a risk that the fish will escape, endangering the health of wild species by breeding with them and potentially spreading disease. Although the fish are meant to be contained inland, critics wonder what will happen if the technology reaches less scrupulous producers. Although the fish are bred to be sterile, critics say, a percentage are not.

Some take issue with the research and the evaluation process. The salmon is being treated as a drug rather than food, with the FDA’s Veterinary Medicine Advisory Committee overseeing the public hearings. Wenonah Hauter, executive director of Food & Water Watch, says that is an inappropriate way to deal with a new product and a new technology.

“We’re very concerned that the Food and Drug Administration is using a process for veterinary drugs,’’ she says. “They need to develop a process that keeps up with science and actually looks at genetically engineered foods. We’re also very concerned about the science they based the food safety assessment on. In their risk assessment, they used only four studies, and three were not peer-reviewed. They were submitted by the company. The fourth was from a peer-reviewed journal, but was 18 years old.’’

Entis, in response, says the research is sound and that the salmon is being thoroughly vetted. He is currently scouting locations for a potential facility.

“The highest gold standard is the drug approval,’’ he says. “That’s why this process was used. I don’t believe this is a drug. It’s a food. But this makes you jump through hoops. It gives more security to people who are somewhat fearful of the technology.’’

This week’s hearings in Rockville, Md., were designed to gather public opinion before the FDA decides whether the fast-growing salmon wins official approval. “There is no timeline on a decision,’’ says Siobhan DeLancey of the FDA Office of Public Affairs.

If the salmon is approved, some restaurants could refuse to serve it. In 2002, several hundred chefs, restaurants, grocers, and wholesalers — among them Ming Tsai of Wellesley’s Blue Ginger — pledged not to buy the product.

If it does one day wind up on the table, though, the taste may be one thing you don’t have to worry about.

“I’ve had it smoked, broiled, poached,’’ Entis says. “It’s a fish. It’s a salmon. You would never be able to tell it apart from any other Atlantic salmon.’’