Dinosaur with a hump discovered 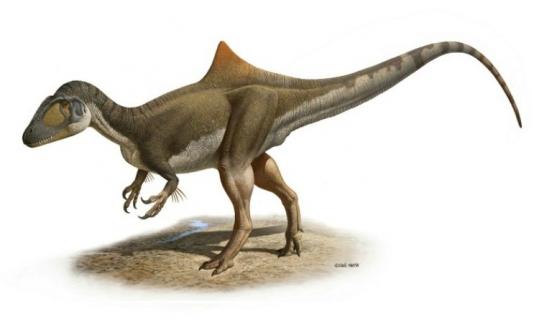 Scientists speculated that the newly discovered dinosaur may have used its hump to communicate. (Raul Martin/AFP/Getty Images)
By Seth Borenstein Associated Press / September 9, 2010

WASHINGTON — The weird world of dinosaurs has just gotten a tad more bizarre. Scientists found a nearly complete fossil of a new dinosaur that sports a noticeable hump, maybe as possible advertising.

The hump on the dinosaur’s back, which was at least 16 inches tall, may have been used to help this meat-eating theropod communicate among its own species, scientists theorize. Discoverer Francisco Ortega of Spain named it Concavenator corcovatus, which means “the hunchback hunter from Cuenca.’’

Ortega said the hump could have been used to store fat or regulate body temperature, but there is also the distinct possibility that it was used by concavenators to somehow differentiate themselves or communicate with one another. But with only one of these dinosaurs, it’s only speculation, he said, and it is hard to figure out what the humps were meant to convey if they were used for communication.

Paleontologist Paul Sereno at the University of Chicago, who wasn’t part of the study, said the only conceivable explanation is “an advertising role’’ because it follows similar pointy fins on other dinosaurs.

“It is an ornamental crest that helps to distinguish the individual,’’ Sereno said in an e-mail.

“Perhaps it was brightly colored, perhaps it would have been well maintained and large in strong, healthy individuals.’’

If that’s the case, the hump could easily have been spotted from afar, Ortega said.

The 20-foot-long, two-footed dinosaur from about 125 million years ago was found in Spain. The discovery is reported in today’s issue of the journal Nature. It is the most complete skeleton of a meat-eater yet, scientists said.

Sereno called it “a spectacular specimen, a very great discovery.’’

This is the only fossil of its kind, but Ortega said it’s unlikely to be an individual deformity and more likely to be a new type of dinosaur.

And the hump is not the only strange feature of the concavenator: It has knobs on its arms that seem like proto-feathers, giving more evidence of the connection between early theropods and birds, Ortega said.

Because of the lack of scales and likelihood of feathers, Sereno said he would put this creature “at the base of the theropod [meat-eating] branch of the dinosaur family tree.’’