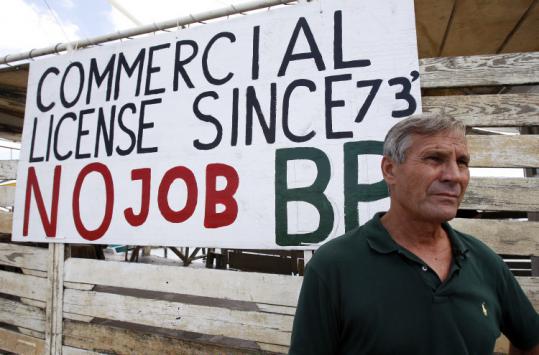 Captain Vatroslav Garbin signed up to participate in BP’s Vessels of Opportunity but has yet to be called. (Patrick Semansky/ Associated Press)
By Kimberly Kindy Washington Post / August 15, 2010

PASCAGOULA, Miss. — Johnny Ray Harris hunted for oil in the gulf near his home for 45 days straight, radioing in coordinates to cleanup crews when he spotted large, inky patches floating in the choppy waters.

“I would call it in, but no one ever came. Not once,’’ Harris said, sitting on his 73-foot-long shrimp boat beside a box filled with unused rubber boots, gloves, and coveralls. “What a waste.’’

Harris is a part of BP’s Vessels of Opportunity program that promised to turn out-of-work fishermen into a powerful task force, skimming and scooping up oil before it reached the shores of Alabama, Mississippi, Louisiana, and Florida.

At its peak, the program dispatched 3,200 boats at an average cost of $2,000 a day. In recent weeks, with a successful capping operation finally containing the spewing well, the oil company has scaled back to about 1,400 vessels.

Both fishermen involved in the program and the company that runs it say the effort — costing $450 million so far — has been fraught with problems. Much of the money doled out by probably went to opportunists rather than to commercial fishermen and charter boat operators whose livelihoods were disrupted by the spill.

Harris and dozens of other fishermen said in interviews with The Washington Post that the amateur effort, which included laying and maintaining boom, failed to prevent oil from reaching the beaches, marshes, and islands near their homes.

BP officials acknowledged that payments as high as $100,000 might have gone to recreational boat owners and others who enrolled multiple boats in the program and quickly seized an opportunity to cash in. But the officials said that it took time to identify problems and make needed reforms.

“When a response of this size gets pulled together that quickly, things fall through the cracks,’’ BP spokesman George Gigicos said.

Boat sales spiked in states around the gulf. And even though fishing was banned in as much as 40 percent of the water, officials saw a double-digit rise in demand for fishing licenses in three gulf states in April through July over last year’s totals, according to data analysis by wildlife officials.

In late June, more than two months into the program, BP began asking participants for proof that their licenses had been issued before the oil spill, company officials said. The company also started a rotation system in mid-July that officials said they hope will pull in fishermen who have been passed by.

“I’ve been waiting by the phone for three months. I’ve heard nothing. I’m still not in,’’ said Jerry Walker, who fishes for kingfish and red snapper in Louisiana. “I’ve been a fisherman for 40 years. I make 100 percent of my living from fishing. These guys out on the water, I’ve never seen any of them before in my life.’’

Gigicos conceded that it took time to distinguish the recreational vessels and out-of town-vessels.

Fishermen and harbor chiefs describe the program’s early days as chaotic and unproductive. Coast Guard planes flew overhead and spotted oil, but their crews were unable to communicate with the rag-tag bands floating beneath them. Repeatedly, boat owners in the program said in interviews that they thought they were part of a “show.’’

Justin Roland, owner of the Tackle Box in Mississippi’s Long Beach harbor, said boat owners who came into his bait shop for snacks bragged about the easy work.

“There were party barges out there. Pontoon boats. Some of them just rode around the water watching movies,’’ Roland said. “It was aggravating to watch. People whose livelihoods are dependent on the gulf, they needed the work, not them.’’