Errant climate may be sign of breakdown, scientists say 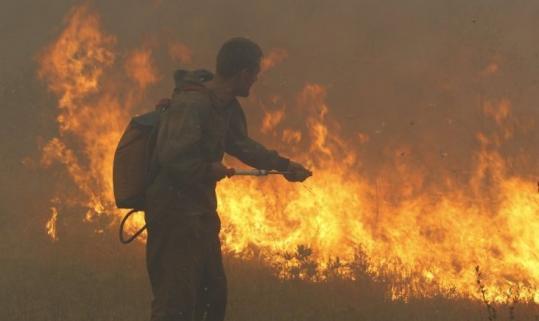 A firefighter worked to extinguish a blaze outside the town of Shatura, 68 miles southeast of Moscow, yesterday. (Reuters)
By Charles J. Hanley Associated Press / August 13, 2010

NEW YORK — Floods, fires, melting ice, and feverish heat — from smoke-choked Moscow to water-soaked Iowa and the High Arctic, the planet seems to be having a midsummer breakdown. It is not just a portent of things to come, scientists say, but a sign of troubling climate change already under way.

The specialists see an urgent need for better ways to forecast extreme events like Russia’s heat wave and wildfires and the record deluge devastating Pakistan. They will discuss such tools in meetings this month and next in Europe and America, under UN, US, and British government sponsorship.

“There is no time to waste,’’ because societies must be equipped to deal with global warming, says British government climatologist Peter Stott.

He said modelers of climate systems are eager to develop supercomputer modeling that would enable more detailed linking of cause and effect as a warming world shifts jet streams and other atmospheric currents. Those changes can wreak havoc on the weather.

In its latest assessment, in 2007, the Nobel Prize-winning panel went beyond that. It said these trends “have already been observed,’’ in an increase in heat waves since 1950, for example.

Still, climatologists generally refrain from blaming warming for this drought or that flood, since so many other factors also affect the day’s weather.

Stott and NASA’s Gavin Schmidt, at the Goddard Institute of Space Studies in New York, said it is better to think in terms of odds: Warming might double the chances for heat waves, for example. “That is exactly what’s happening,’’ Schmidt said, “a lot more warm extremes and less cold extremes.’’

The World Meteorological Organization pointed out that this summer’s events fit the international scientists’ projections of “more frequent and more intense extreme weather events due to global warming.’’

In fact, in key cases they’re a perfect fit.

RUSSIA
It has been the hottest summer ever recorded in Russia, with Moscow temperatures topping 100 degrees Fahrenheit for the first time. Russia’s drought has sparked hundreds of wildfires in forests and dried peat bogs, blanketing Moscow with a toxic smog that lifted yesterday after six days. The Russian capital’s death rate doubled to 700 people a day at one point. The drought reduced the wheat harvest by more than one-third.

The 2007 Intergovernmental Panel report predicted a doubling of disastrous droughts in Russia this century and cited studies foreseeing catastrophic fires in dry years. It also said that Russia would suffer large crop losses.

PAKISTAN
The heaviest monsoon rains on record, 12 inches in one 36-hour period, have sent rivers rampaging over huge swaths of countryside, flooding thousands of villages. It has left 14 million Pakistanis homeless or otherwise affected and killed 1,500.

The government calls it the worst natural disaster in the nation’s history.

A warmer atmosphere can hold and discharge more water. The 2007 report said rains have grown heavier for 40 years over north Pakistan and predicted greater flooding this century in south Asia’s monsoon region.

CHINA
China is witnessing its worst floods in decades, the World Meteorological Organization says, particularly in the northwest province of Gansu. There, floods and landslides last weekend killed at least 1,100 people and left more than 600 missing, feared swept away, or buried beneath mud and debris.

The Intergovernmental Panel reported in 2007 that rains had increased in northwest China by up to 33 percent since 1961 and that floods nationwide had increased sevenfold since the 1950s. It predicted still more frequent flooding this century.

UNITED STATES
In Iowa, soaked by its wettest 36-month period in 127 years of recordkeeping, floods from three nights of rain this week forced hundreds from their homes and killed a 16-year-old girl.

The international climate panel projected increased US precipitation this century, except for the Southwest, and more extreme rain events causing flooding.