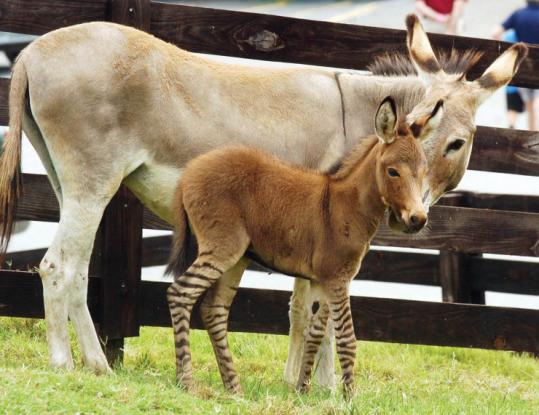 With her mother’s ears and father’s stripes, this zedonk is the first such mix born in Chestatee Wildlife Preserve in decades. (Tom Reed/ The Times via Associated Press)
Associated Press / July 29, 2010

DAHLONEGA, Ga. — A zedonk, an unusual cross between a donkey and a zebra, is attracting attention at Chestatee Wildlife Preserve in north Georgia after being born there about a week ago.

The animal, which has a zebra father and a donkey mother, has black stripes prominently displayed on her legs and face.

C.W. Wathen, the Dahlonega preserve’s founder and general manager, says the foal has a zebra’s instincts. Wathen says she sits up instead of lying on her side, as if she’s staying alert for predators.

Wathen says that in about two weeks, the zedonk will begin roaming the property with the rest of the animals, including a camel, a donkey sibling, her zebra father, and a 40-year-old miniature donkey.

Donkeys and zebras don’t usually mate, but zedonks turn up occasionally. In 2005, a zebra gave birth to a zedonk in Barbados, according to the news website Science Daily. And in the 1970s, three zedonks were born at a European zoo to a donkey mother, according to the website of Britain’s Colchester Zoo.

Once the zedonk gets a little older, Wathen said, she’ll be able to go on off-site visits like some of the other animals on the preserve.

Other animals on the 25-acre nonprofit preserve include giant tortoises, macaws, white tigers, black leopards, and a 2-month-old wolf.