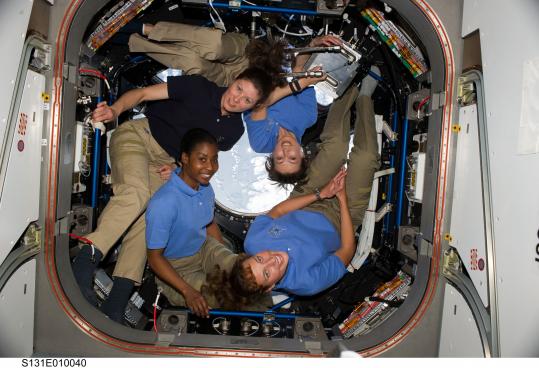 WILLIAMSTOWN — On her last out-of-town business trip, Stephanie Wilson and her travel partners lost e-mail contact with the home office for days. To most people, that’s a minor inconvenience. A blessing, even. The boss can’t reach us? What a shame.

Not in Wilson’s line of work, though. Not when your home office is the National Aeronautics and Space Administration’s Mission Control, your title is shuttle mission specialist, and your job takes you 213 miles above the Earth at speeds exceeding 17,000 miles per hour.

Up there, no glitch is truly minor, no communications breakdown a cause for smiles. As Wilson tells it, though, losing e-mail transmission in April on her third space shuttle flight — the 15-day mission aboard Discovery ended without serious mishap — was a walk in the park compared with her second voyage, in 2007. On that flight, a solar array, which is a collection of photovoltaic modules that help power the International Space Station, tore during a redeployment maneuver. Wilson, an engineering and robotics specialist, helped orchestrate an unplanned spacewalk to repair and re-attach the array. The key word here being “unplanned.’’

“That’s always tricky,’’ says Wilson, sitting for an interview near the Williams College campus. When NASA specialists and crew members have to problem-solve on the fly, she adds, “It’s very much an Apollo 13 moment,’’ referring to the US moon mission that nearly ended in disaster.

Wilson, who is 43 and grew up in Pittsfield, came to campus on a rainy June weekend as a hometown hero, proud of her western Massachusetts roots and a role model for any girl who has her nose in a math book and her eyes fixed on the stars. Her itinerary included visits to the Pittsfield Boys & Girls Club and Berkshire Music School, where she once studied the clarinet.

The second African-American woman to blast into space (Mae Jemison in 1992 was the first), Wilson has been aboard three shuttle missions. Her first was in July 2006, when NASA relaunched flights after a two-year hiatus. Her recent voyage on Discovery was one of the last planned shuttle flights. NASA has scheduled its final shuttle launch for next February, its focus now shifting to other missions. Wilson’s resupply mission to the International Space Station represented several firsts for space travel. It was, among other things, the first time four female astronauts — Wilson, Naoko Yamazaki, Dorothy Metcalf-Lindenburger, and Tracy Caldwell Dyson — were in space together.

Wilson downplays that milestone, seeing it as more happy coincidence than statement of how far — literally — women have come in space exploration.

“It was nice, and we all knew each other from mission training,’’ she says. “But much of our training and mission assignments have become gender-neutral, as it should be.’’ When it’s jokingly suggested that the four might have unfurled a “GIRLS RULE’’ banner on the space station, she laughs and shakes her head. “No, no,’’ says Wilson. “It speaks enough that we were all up there together.’’

After the April mission, Wilson spent several weeks in debriefing sessions before embarking on the kind of meet-and-greet tour familiar to most veteran astronauts. Many of these stops involve public schools, NASA corporate partners, or various institutions celebrating spaceflight.

Her visit to Williams was a special case. Invited to commencement exercises and given an honorary degree, Wilson brought along a Williams banner she had carried into space. Her visit had a nostalgic element to it, as well. It was on this campus 30 years ago that she paid a life-changing visit to astronomy professor Jay Pasachoff while on a “career interest’’ school assignment. Pasachoff welcomed Wilson into his home and spoke at length about what an astronomer does, explaining how astronomy fit with engineering, another of Wilson’s early career interests. The 13-year-old took Pasachoff’s words to heart, and the rest, as they say, is history.

Pasachoff, still teaching astronomy at Williams, says he doesn’t recall the details of their meeting but he must have made an impression. After joining the astronaut corps, Wilson and her family invited him to Florida for all three of her shuttle launches. Wilson is “a very wonderful and directed person who set her goals early,’’ says Pasachoff, and who made sure to get the education and training to support such goals.

On one trip to Cape Canaveral, he recalls, someone asked one of the astronauts if he was nervous about riding a rocket ship into space. “And he said, ‘If you’re scared when you’re up there, you’re in the wrong business,’ ’’ Pasachoff says. “I suppose that’s true for Stephanie, too.’’

Her flight plan may have been set early, but Wilson says she knew her ultimate goal of becoming an astronaut was something very few achieved, even among the most highly qualified aspirants.

At Harvard, where she completed her undergraduate work, Wilson found another mentor in engineering professor John Hutchinson, a leading scholar in the field of applied mechanics. She went on to work for the Martin Marietta Astronautics Group as a load and dynamics engineer on the Titan IV rocket team and at the Jet Propulsion Laboratory in California, working on the Galileo spacecraft. In between, she earned a master’s degree in aerospace engineering at the University of Texas, joining the NASA family in 1996. For six years she trained intensively for spaceflight, a goal deferred by the 2003 Columbia tragedy, after which NASA suspended all shuttle flights for more than two years.

Like the Challenger tragedy before it, says Wilson, the Columbia disaster was “a huge, huge loss to NASA and the country, but one that initiated many upgrades and improved safety measures. For those of us who’ve followed, there’s been a recommitment to the goal of spaceflight, so their legacies and work were not done in vain.’’

The physical and psychological challenges of spaceflight have seldom troubled her, she says, likening them to a military deployment overseas. The side benefits? Otherworldly.

“It might sound obvious, but looking out the window there are plenty of ‘wow’ moments,’’ Wilson says. “Anytime we fly over the Sahara Desert or Himalayas, it’s spectacular. Or transition from day to night, or see the aurora as we’re over the poles. That’s something you never get tired of.’’

Wilson, who is single and lives near Houston’s Johnson Space Center, says her next goal is a long-duration stay on the space station, where she would probably be flown aboard a Russian Soyuz rocket. Such a mission could take two years’ training, much of it in Russia and Japan, and last six months or longer. Wilson would happily accept the challenge.

“Shuttle flights are wonderful but very quick,’’ she notes. “For long-duration flights, you’re much more part of the scientific process.’’

Wilson adds, “It’s important to continue human space flight, whatever the destination, and have the US participate. And I’d hope to be working on mission design to other destinations, maybe Mars or an asteroid.’’

Her message to young girls? “That with hard work and perseverance, it’s possible to do what I’ve done. The sky, or outer space, really is the limit for their aspirations.’’