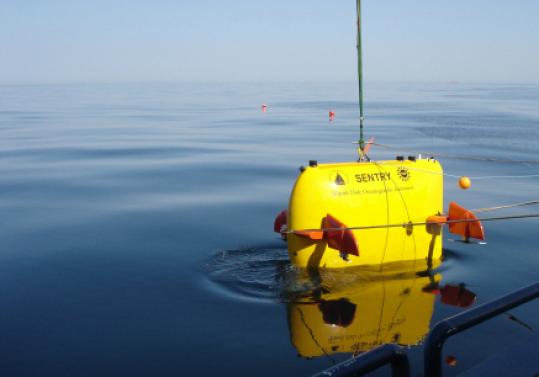 It wasn’t until seven weeks after the oil well began gushing that the company acknowledged oil remained hidden under the surface of the Gulf of Mexico, and it continues to dispute the extent of miles-long submerged plumes.

But an unusual experiment conducted in 2000 off the coast of Norway, a trial run of a deep-water oil and gas spill that BP helped pay for, showed that oil could remain underwater for some time.

The North Atlantic exercise was designed to understand how a spill would behave as the drilling industry plumbed new depths to extract oil and gas. The federal Minerals Management Service and 22 companies took part in the test, at about half the depth of the gulf disaster.

Oil and gas were released close to the sea floor and only a fraction of it was spotted on the surface after about seven hours, defying conventional wisdom that oil would almost immediately surface because it’s lighter than water.

“Over time, it will rise, but the rate of rise can be quite slow,’’ said Eric Adams, senior research engineer at the Massachusetts Institute of Technology, who helped perform several analyses on Project Deep Spill. “A lot of the oil [in the experiment] most likely rose after they went home.’’

A BP spokesman last week acknowledged the company participated in the Deep Spill experiment but refused to answer why officials flatly denied the possibility there could be significant amounts of oil trapped underwater — even the day after the federal government confirmed the existence of plumes on June 8.

“There is certainly oil in the water; we believe [it is] in low and small concentrations,’’ Toby Odone, the BP spokesman, said in an interview. Tony Hayward, BP chief executive, also downplayed the plumes last week during a congressional hearing. Under questioning from Edward J. Markey of Massachusetts, he said the concentrations were low, and some of the oil was not from the ongoing spill.

Tests so far show that most of the underwater plumes are diluted: less than 1 part per million, according to the National Oceanic and Atmospheric Administration. In those concentrations the water would not look polluted to the naked eye.

“But even though they are low concentrations, the biological community is very sensitive that far down,’’ said Steve Murawski, chief scientist for NOAA Fisheries Service.

Little is known about the plumes, which are largely separated from the surface slick. It is not clear how much oil they hold, how many and where there are, how quickly the oil will break down, and whether the plumes are harming marine life.

NOAA officials have confirmed the existence of underwater oil as far down as 3,300 feet below the surface and several miles from the wellhead. Other scientists have found evidence of plumes more than 10 miles long.

A research cruise headed by Woods Hole Oceanographic Institution researchers and funded by the National Science Foundation set out Thursday to map one of the cloudy mixtures and dissect its components to better understand its toxicity, where it might travel, and how quickly it is being broken down by oil-eating microbes.

There are other concerns. Scientists say the high pressure of the gushing leak is creating tiny oil droplets, some that can become suspended in water. The use of large amounts of underwater chemical dispersants are making those droplets smaller still. All those droplets, suspended in the water and trapped by dense ocean layers, are probably forming the plumes. Scientists are also concerned about how much gas from the gushing well remains trapped underwater.

The use of dispersants is continuing, because scientists believe they help natural forces more easily break down the oil into less toxic compounds. Oil-eating microbes will do that under water. On the surface, they will be aided by sunlight, waves, and weather.

But it’s a careful balance. If there are too many oil droplets in the water, the microbes, which need oxygen, could grow out of control and suck up so much oxygen they create a dead zone. Samantha Joye, a University of Georgia scientist who was one of the first to discover the undersea oil, said oxygen levels were down 30 percent or more in some areas she sampled. Federal officials say ongoing testing shows oxygen levels in the gulf are normal.

“But there is a tipping point . . . that’s why you need continuous monitoring,’’ and NOAA is doing that, said Murawski, of the Fisheries Service.

The Deep Spill experiment, some 200 miles off Norway’s coast, was celebrated at the time as a forward-looking exercise for the next generation of drilling.

In all, four mixtures were released, including a combination of diesel oil and natural gas that, while not a perfect parallel to the crude oil leaking in the gulf, gives some comparison. Flow rates were comparable to the Gulf spill rate. No dispersants were used.

According to a 2005 analysis by MIT’s Adams and Scott Socolofsky, now a professor at Texas A&M University, between 2 and 17 cubic meters of the 60 cubic meters of released diesel made it to the surface before overflights looking for oil on the sea surface ended, about seven hours after the oil release stopped.

The scientists suggested that a significant portion of the oil rose slowly because it was comprised of very small droplets. Another colleague, Stephen Masutani of the University of Hawaii, found that one-third of the oil in Deep Spill would probably be found in droplets of half a millimeter or smaller, which could have taken a day or more to surface.

In the gulf spill, the dispersants probably made droplets much smaller still, Adams said, which means they could take much longer to surface.

Those droplets can get trapped by currents and dense water layers deep in the sea. “These small droplets have no choice but to follow the water once it leaves the upward-rising oil-and-gas mixture,’’ Socolofsky said.

After Deep Spill, there was no effort by the industry — or government — to better understand these submerged oil droplets.

CLARIFICATION: An earlier version of this story incorrectly said that NOAA had confirmed the existence of oil underwater 142 miles from the wellhead. While NOAA did find evidence of oil, tests showed it did not come from the leaking BP wellhead.