BP agrees to $20b account to pay Gulf claims 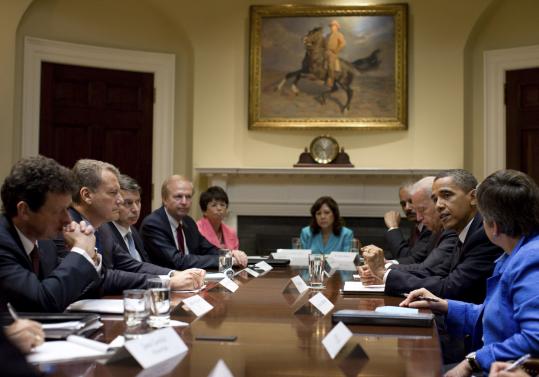 President Obama met yesterday with BP executives in the White House. The company has agreed to place $20 billion in an escrow account for claims resulting from the oil spill. It will also set aside $100 million for unemployed oil workers. (Pete Souza/ White House via Bloomberg News)
By Scott Wilson and Joel Achenbach Washington Post / June 17, 2010

WASHINGTON — The Obama administration and reached an agreement yesterday under which the company will place $20 billion in an escrow account to pay damage claims resulting from the oil spill in the Gulf of Mexico.

The company, whose chairman announced yesterday that it would not pay dividends to shareholders for the rest of the year, will also contribute $100 million to a fund that supports unemployed oil workers.

Speaking to reporters in the State Dining Room of the White House, President Obama called the agreement “a good start’’ that will reassure “the people and small businesses I was talking to in the Gulf that BP will meet its responsibilities.’’

“I’m absolutely confident BP will be able to meet its obligations to the Gulf Coast and to the American people,’’ Obama said. “BP is a strong and viable company and it is in all our interests that it remains so. This is about accountability. At the end of the day, that’s what every American wants and expects.’’

The agreement emerged after a more than three-hour meeting between White House officials and BP executives, whose relationship has grown increasingly strained as the spill nears the two-month mark.

Obama participated at various times in the discussions, which senior administration officials described as a “negotiation,’’ and met alone afterward with BP chairman Carl-Henric Svanberg. Attorney General Eric H. Holder also participated in much of the session, a sign of the potential criminal liability the oil company may face.

Under the terms of the agreement, BP will pay into the escrow account over the next four years, including a payment of $5 billion this year. The fund will be administered by Kenneth Feinberg, the Washington lawyer who oversaw a similar fund for victims of the Sept. 11 terror attacks and who more recently was the Obama administration’s special master for executive compensation.

“This administration and our company are fully aligned in our interest of closing this well, cleaning the beaches, and caring for those affected,’’ Svanberg said. He added, “I would like to take this opportunity to apologize to the American people on behalf of all the employees of BP, many of whom are living on the Gulf Coast.’’

BP wanted some assurance that it will not be forced to pay for the economic impact to the oil industry of the administration’s six-month moratorium on deep-water drilling. Although neither Obama nor Svanberg explicitly addressed that contentious issue in their public remarks, Obama noted that BP had “voluntarily’’ created the $100 million fund for unemployed oil workers. There was no other suggestion that BP would be legally liable for lost wages in the oil industry.

BP also needed some affirmation that the government is not going to drive the company into bankruptcy as a result of the spill. The company has heard lawmakers declare that there should be no limit to its liability. Simultaneously the amount of oil surging from the reservoir beneath the gulf has turned out to be far greater than originally estimated. BP executives have seen the company’s market value plummet along with the company’s credit rating.

Obama said exactly what the BP executives and their shareholders wanted to hear: “BP is a strong, viable company, and it is in all of our interests that it remain so.’’

But speaking to reporters outside the White House, Svanberg angered Gulf residents with what appeared to be another insensitive comment from BP. “I hear comments sometimes that large oil companies are greedy companies or don’t care, but that is not the case with BP,’’ Svanberg said. “We care about the small people.’’

Justin Taffinder of New Orleans was not amused.

“We’re not small people. We’re human beings. They’re no greater than us. We don’t bow down to them. We don’t pray to them,’’ Taffinder said.

Svanberg is Swedish, and his comments — in English — may have been an unintentional slight. Asked about the chairman’s remark, BP spokesman Toby Odone told the Associated Press in an e-mail that “it is clear that what he means is that he cares about local businesses and local people. This was a slip in translation.’’

Also yesterday, BP announced that it had begun using a second containment system to capture oil leaking from the well, which according to the latest scientific estimate is gushing between 35,000 and 60,000 barrels a day (1.47 million to 2.52 million gallons).

The new technique pulls oil and gas from the blowout preventer and up to a surface ship, the Q4000, using one of the same lines that had been employed to pump heavy drilling mud into the well during the ill-fated “top kill’’ attempt last month.