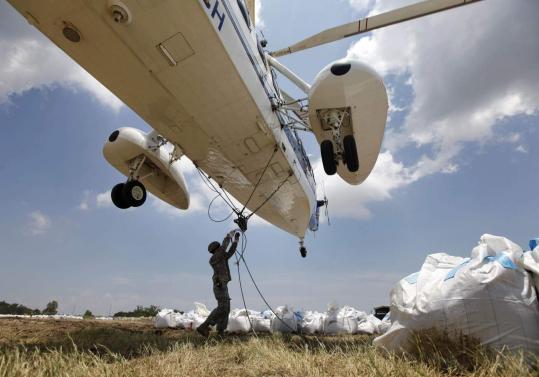 A member of the Louisiana National Guard hooked up sandbags to a helicopter yesterday in Buras. Oil is now lapping at the shorelines of Louisiana, Alabama, and Mississippi and there is little hope of stopping the flow for months.
(Gerald Herbert/Associated Press)
By Helene Cooper and Peter Baker New York Times / June 2, 2010

WASHINGTON — The Obama administration said yesterday that it had begun civil and criminal investigations into the massive oil spill in the Gulf of Mexico, as the deepening crisis threatened to define President Obama’s second year in office.

Attorney General Eric H. Holder Jr. said in New Orleans that he planned to “prosecute to the fullest extent of the law’’ any person or entity that the Justice Department determines has broken the law in connection with the oil spill.

lost 15 percent of its market value during the day’s trading.

BP and government officials said flatly for the first time that they had abandoned any further plans to try to plug the well and would instead try to siphon the leaking oil and gas to the surface until relief wells can stop the flow, most likely not before August.

Holder’s comments, which echoed those of Obama earlier in the day in the Rose Garden, reflected deepening frustration within the administration at the inability to stop the spill, along with wide concern that the government and the president appear increasingly impotent as oil laps at the shorelines of Louisiana, and now Alabama and Mississippi.

One person briefed on the inquiry said that it was in an early stage and that no subpoenas had been issued to BP, the owner of the well.

It was unclear whether any had gone to , which leased the Deepwater Horizon, the nine-year-old drilling rig that exploded and sank in April, to BP; Cameron, the company that manufactured a “blowout preventer’’ that failed to function after the explosion; or , which performed drilling services like cementing.

Administration officials said they were reviewing violations of the Clean Water Act, which carries criminal and civil penalties and fines; the Oil Pollution Act of 1990, which can be used to hold parties responsible for cleanup costs; and the Migratory Bird Tree Act and the Endangered Species Act, which provide penalties for injury and death of wildlife.

“BP will cooperate with any inquiry that the Department of Justice undertakes, just as we are doing in response to the other inquiries that already are ongoing,’’ the company said in a statement.

Having abandoned the attempt to plug the gushing well, BP and the government moved ahead on the latest plan, to contain the oil and gas as it flows from the floor of the gulf and siphon it to the surface.

BP prepared to sever the pipe that once connected the well to the surface and is now snaking along the sea floor from the wellhead. That pipe, called a riser, had been attached to a blowout preventer, a stack of valves sitting on top of the well.

Removing the pipe could increase the flow of oil into the gulf until response crews can complete the next phase of the operation, affixing a cap to the remaining stub of the riser at the blowout preventer and siphoning the leaking oil into the cap through a new riser and up to a ship on the surface.

The more confrontational tone from Washington underscored concerns within the administration about the long-term effect of the oil spill, not only environmentally, economically, and politically, but on the national psyche as well.

Like no other, the topic of the oil spill now dominates the national conversation. Early comparisons to Hurricane Katrina have dissolved into comparisons to the hostage crisis with Iran — an episode that spanned 444 days and beleaguered the presidency of Jimmy Carter.

The spill has kept Obama from focusing attention on other issues, like creating jobs and carrying out the health care law, at a time when polls suggest public trust in government is declining and when his party is fighting to retain control of Congress.

“It’s an interesting disaster because it’s one that doesn’t stop — it’s as if Katrina sat on top of New Orleans for six weeks without going away,’’ said George Haddow, a disaster management consultant from New Orleans who was a senior Federal Emergency Management Agency official under President Bill Clinton.

Yesterday amounted to the administration’s most intensive effort yet to show that it is doing everything possible to respond and to hold BP and the other companies accountable.

Robert Gibbs, the White House press secretary, said Obama has been “enraged at the time that it’s taken’’ to stop the leak.

Gibbs added that the White House did not think BP “was forthcoming on what the impact would be of cutting the riser off.’’

For Obama, part of the problem has been that the solution to the BP disaster is at its heart an engineering problem, and one the government has acknowledged it is in no position to fix on its own.

Former attorney general William P. Barr said the administration’s move to investigate risked looking like political damage control while chilling cooperation with the company at the time it is needed most.

“The Department of Justice has to be very careful about using criminal prosecution to respond to political pressure,’’ Barr, who ran the department from 1991 to 1993, said in an interview.

But Obama said yesterday that “we have an obligation to determine what went wrong.’’

He appeared after meeting with the two men he has appointed to lead an inquiry into the spill — former Senator Bob Graham of Florida, a Democrat, and a former Environmental Protection Agency administrator, William Reilly, a Republican.

During the meeting in the Oval Office, the president was adamant that the government and the industry had to find a way to make offshore drilling safe because the nation needs the oil, and stressed to Reilly and Graham that that was part of their charge, according to people familiar with the meeting. 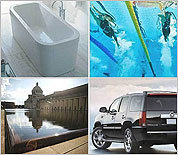