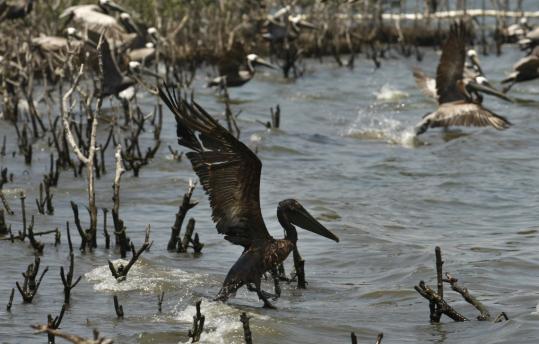 Millions of gallons of brown crude are coating pelicans and other birds and wildlife in Louisiana. The government is facing questions as to why it can’t assert control over the cleanup. (Gerald Herbert/ Associated Press)
By Greg Bluestein Associated Press / May 25, 2010

COVINGTON, La. — The official leading the federal response to the Gulf oil spill rejected the notion of removing and taking over the cleanup operation, saying yesterday that the government has neither the company’s expertise nor its deep-sea equipment.

“To push BP out of the way would raise a question: To replace them with what?’’ Coast Guard Commandant Thad Allen said at a White House briefing.

The White House is facing increasing questions about why the government can’t assert more control over the handling of the catastrophe, which unfolded after a BP offshore drilling rig blew up April 20.

BP’s attempts to stop the leak have all failed, despite the company’s use of submarine robots that can operate at depths no human could withstand. Millions of gallons of brown crude are now coating birds and other wildlife and fouling the Louisiana marshes.

BP is now pinning its hopes on yet another technique never tested 5,000 feet underwater: a “top kill,’’ in which heavy mud and cement would be shot into the blown-out well to plug it. The top kill could begin as early as tomorrow, with BP’s chief executive, Tony Hayward, giving it a 60 percent to 70 percent chance of success.

Allen said federal law dictates that BP must run the cleanup, with the government overseeing its efforts.

“They’re exhausting every technical means possible to deal with that leak,’’ he said. “I am satisfied with the coordination that’s going on.’’

Interior Secretary Ken Salazar suggested over the weekend that the government could intervene aggressively if BP wasn’t delivering. “If we find that they’re not doing what they’re supposed to be doing, we’ll push them out of the way appropriately,’’ he said.

But asked about that comment yesterday, Allen said: “That’s more of a metaphor.’’

Allen said BP and the government are working closely together, with the government holding veto power and adopting an “inquisitorial’’ stand toward the company’s ideas. The commandant also said the government has the authority to tell BP what to do, and such orders carry the force of law.

Homeland Security Secretary Janet Napolitano also took a more measured tone at a news conference yesterday in Galliano, La., with Salazar and six US senators who had flown over the coast to see the damage. “We continue to hold BP responsible as the responsible party, but we are on them, watching them,’’ she said.

BP said it is doing all it can to stop the leak. Its chief operating officer, Doug Suttles, made the rounds of network morning news shows to say that the company understands people are frustrated.

“Clearly Secretary Salazar is telling us that we need to do this as expediently as we can,’’ Suttles said. “And of course we are.’’

Hayward walked along oil-soaked Fourchon Beach and said he had underestimated the possible environmental effects.

“I’m as devastated as you are by what I’ve seen here today,’’ Hayward said after he spoke with cleanup workers in white overalls and yellow boots, some shoveling oily sand into garbage cans. “We are going to do everything in our power to prevent any more oil from coming ashore, and we will clean every last drop up and we will remediate all of the environmental damage.’’

In another source of tension between BP and the government, the company was still using a certain chemical dispersant yesterday to fight the oil despite orders from the Environmental Protection Agency to employ something less toxic.

Mark Kellstrom, an analyst with Summit, N.J.-based Strategic Energy Research, said time might be running out for BP to continue calling the shots. “The rhetoric is growing up in Washington for the politicians to kick out BP and let the government take over,’’ Kellstrom said, though he added that it would be a mistake.

BP had hoped to try a top kill earlier but needed more time to get equipment into place and test it. A top kill has worked on aboveground oil wells in Kuwait and Iraq but has never before been attempted so far underwater.

Suttles said the biggest technical challenge is that the fluid must be pumped in very quickly, and engineers need to make sure it goes into the well, not out through the leaking pipe, which could make the leak worse.

A containment device is on the seafloor, ready to be put in place if the top kill fails or makes the leak worse. It is a smaller version of a 100-ton box that BP lowered several weeks ago in hopes of capturing much of the oil.