Oil washes into marshes of Louisiana 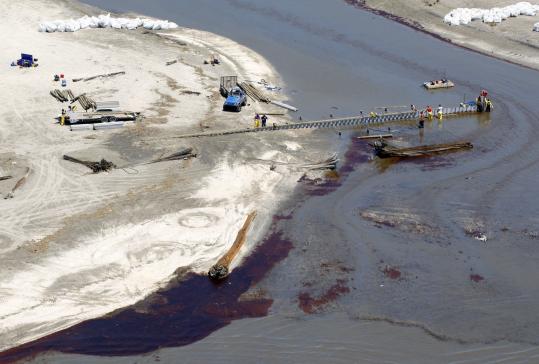 Workers constructed a dam to keep oil from entering wetlands on Elmer’s Island in Grand Isle, La., yesterday. Crude from the Deepwater Horizon oil rig explosion last month in the Gulf of Mexico has started drifting ashore along the Louisiana coast. (Patrick Semansky/Associated Press)
By Kevin McGill Associated Press / May 21, 2010

GRAND ISLE, La. — The spectacle many had feared for a month finally began unfolding as gooey, rust-colored oil washed into the marshes at the mouth of the Mississippi, stoking public anger and frustration with both and the government.

The sense of gloom deepened as BP conceded what some scientists have been saying for weeks: that the oil leak at the bottom of the Gulf of Mexico is bigger than the company previously estimated.

Up to now, only tar balls and a sheen of oil had come ashore. But on Wednesday, chocolate brown and vivid orange globs, sheets, and ribbons of foul-smelling oil with the consistency of latex paint began coating the reeds and grasses of Louisiana’s wetlands, home to rare birds, mammals, and a rich variety of marine life.

There were no immediate reports of any mass die-offs of wildlife or large numbers of creatures wriggling in oil, as seen after the Valdez disaster, but that was the fear.

Billy Nungesser, president of Louisiana’s Plaquemines Parish, toured the oil-fouled marshes Wednesday and said: “Had you fallen off that boat yesterday and come up breathing that stuff, you probably wouldn’t be here.’’

A live video feed of the underwater gusher, posted online yesterday after lawmakers exerted pressure on BP, is sure to stoke the anger. The link is globalwarming.house.gov/spillcam.

It shows what appears to be a large plume of oil and gas still spewing into the water next to the stopper-and-tube combination that BP inserted to carry some of the crude to the surface. The House committee website where the video was posted promptly crashed because so many people were trying to view it.

“These videos stand as a scalding, blistering indictment of BP’s inattention to the scope and size of the greatest environmental catastrophe in the history of the United States,’’ said Representative Edward J. Markey, Democratic of Malden.

At least 6 million gallons have gushed into the Gulf — more than half the amount the Exxon Valdez tanker spilled in Alaska in 1989 — since the Deepwater Horizon drilling platform exploded 50 miles off the coast April 20. Eleven workers were killed.

The slow-motion disaster could become far wider. Government scientists said a small portion of the slick had entered the so-called loop current, a stream of fast-moving water that could carry the mess into the Florida Keys and up the state’s Atlantic Coast, damaging coral reefs and fouling beaches.

“It’s anger that the people who are supposed to be driving the ship don’t have any idea what’s going on,’’ E.J. Boles, a musician from Big Pine Key, Fla., said of both BP and the government. “Why wouldn’t they have any contingency plan? I’m not a genius, and even I would have thought of that.’’

Mark Proegler, BP spokesman, said the mile-long tube inserted into the leaking well pipe over the weekend is capturing 210,000 gallons of oil a day — the total amount the company and the Coast Guard had estimated was gushing into the sea — but that some is still escaping. He would not say how much.

The National Oceanic and Atmospheric Administration said an interagency team using ships and planes is working on a new estimate of how much oil is gushing from the well. Agency officials would not speculate on how big the leak might be.

Washington, meanwhile, turned up the pressure on BP.

The Obama administration asked the company to be more open with the public by sharing such information as measurements of the leak and the trajectory of the spill. BP has been accused of covering up the magnitude of the disaster.

Also, the Environmental Protection Agency directed BP to employ a less toxic form of the chemical dispersants it has been using to break up the oil and keep it from reaching the surface.

BP is marshaling equipment for an attempt as early as Sunday at a “top kill,’’ which involves pumping heavy mud into the top of the blown-out well to try to plug the gusher.

A top kill has been used before above ground, but like other methods BP is exploring, it has never been attempted 5,000 feet underwater.

If it doesn’t work, the backup plans include a “junk shot’’ — shooting golf balls, shredded tires, knotted rope, and other material into the well to clog it up.

© Copyright 2010 Globe Newspaper Company.
Related
Your comment is subject to the rules of our Posting Policy
This comment may appear on your public profile. Public Profile FAQ