More than the money 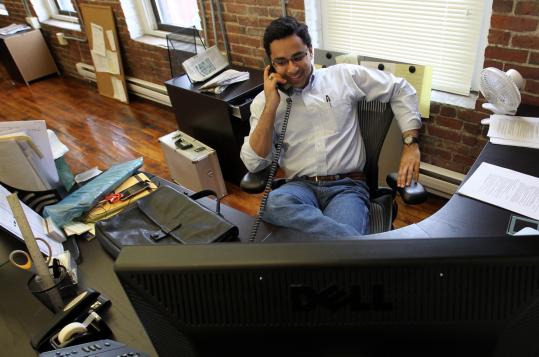 Shakeel Avadhany, chief executive and founder of Levant Power, at the company’s Cambridge headquarters. Levant expects to increase staff over the next six months to about 10 from 5. (David L. Ryan/Globe Staff)
By Robert Gavin Globe Staff / May 16, 2010

Then the Wilbraham firm won the first $200,000 MIT Clean Energy Entrepreneurship Prize in a rigorous contest that not only introduced its founders to venture capitalists and successful entrepreneurs, but also pushed them to hone their strategy, business plan, and pitch. Since then, FloDesign, which makes highly efficient wind power turbines, has raised more than $40 million from Wall Street, Silicon Valley investors, and other backers; won more than $11 million in federal grants and state support; and begun an expansion that will more than double its employment to about 75 by the end of the year.

“By going through the competition, it prepared us for the real deal,’’ said Stanley Kowalski III, a FloDesign founder. “It provided us with coaching and mentoring. It really epitomizes the term ‘angel.’ ’’

FloDesign is one example of the impact the MIT competition has had since it awarded the first Clean Energy prize in the spring of 2008. Of 50 teams that advanced to the semifinals in the first two years of the competition, 16 are operating companies today, cumulatively raising at least $65 million in venture and government funding, according to the Massachusetts Institute of Technology.

Those firms include Levant Power Corp. of Cambridge, which makes devices that harness the energy of bouncing shock absorbers and funnel it back into a vehicle’s electrical system to cut gas consumption; FastCap Systems Corp., now expanding into a 17,000-square-foot facility in South Boston, which is developing an energy storage system to replace or supplement batteries in hybrid buses, trucks, and other heavy vehicles; and EnergyHub of New York, which has invented an array of home energy management devices, and employs about 25. All were finalists or semifinalists in the competition.

“It was a great proving ground,’’ said Seth Frader-Thompson, EnergyHub’s chief executive. “As a first-time entrepreneurial team, you have a lot of bad ideas, but you get paired up with mentors, successful entrepreneurs, and business executives. They really help you focus.’’

MIT last week awarded its third Clean Energy Prize to C3Nano, a Stanford University start-up that uses nanotechnology to improve the efficiency of solar cells. The competition, howev er, doesn’t only promote new technologies. The main thrust is develop the business skills necessary to bring products to market, while creating a class of entrepreneurs who will launch several companies over the course of their careers.

In the run up to the clean energy competition, which requires 30-page business plans, MIT sponsors a pitch contest, in which competitors give one-minute spiels to potential investors, and an executive summary competition, in which the pitches are expanded to two-page proposals. Along the way, the competitors are criticized, advised, grilled, cajoled, and supported by successful entrepreneurs, venture capitalists, and industry specialists.

Ultimately, said Bill Aulet, managing director of the MIT Entrepreneurship Center, the $200,000 prize is not an end in itself, but rather an incentive to learn.

“The prize is a head fake to get them to eat their vegetables,’’ said Aulet. “We’re very focused on building entrepreneurial capabilities. It’s: how do you find customers, build a team, raise money, and build a sustainable clean energy business?’’

NanoPur, a finalist for the 2008 Clean Energy Prize, provides an example. An MIT team led by Justin Ashton, then an MBA candidate, planned to license from Lawrence Livermore National Laboratory in California a membrane technology that would dramatically cut the energy used in desalination, the process that turns salt water into fresh water. NanoPur, however, failed to obtain the licenses, and never got off the ground.

Not long after, Ashton cofounded another company, XL Hybrids Inc. of Somerville, which is developing hybrid technology for commercial fleets of trucks, vans, and other heavy vehicles. So far, the company has raised about $1.2 million from angel investors, and now has about six employees. It plans to do pilot testing in the fall and begin commercial production by early 2011, Ashton said.

“Even though it didn’t work out with NanoPur, the competition really galvanized my desire to be an entrepreneur,’’ said Ashton, 33, who earned his MBA in 2008. “To have mentors, to get feedback, to learn so much so quickly, it was a great experience.’’

The grand prize is financed by the US Energy Department and , the Boston utility. In addition to the grand prize, each of five finalists wins $15,000 from other sponsors.

For the finals, the field is first narrowed to 25 semifinalists, based on a review of executive summaries by 25 judges. Then, 25 new judges select the finalists based on business plans, a 12-slide presentation, and a short pitch.

Seven judges determine the grand prize winner, in a process that might be described as business-school-meets-reality-show. Each of the five finalists makes a 10-minute presentation and faces 10 minutes of questioning by the judges, then leaves the room while the judges dissect the plan and the pitch.

After all the teams have presented, the judges begin a discussion that will select the winner. “They eliminate from the bottom, throw people off the island,’’ said Aulet. “But they’re much more compassionate than on TV. They’re very sympathetic to entrepreneurs.’’

The judges come from different backgrounds, so the questions range widely. For example, one of this year’s judges, NStar vice president of customer care Penni McLean-Conner, said she focused on target markets: “Who are you selling to and how are you going to persuade customers?’’

Another judge, Susan Tierney, managing principal at Analysis Group, a consulting firm in Boston, said she frequently asked the entrepreneurs, “Is there enough here to be game-changing?’’

That’s what ultimately separates winners from runners-up, judges said: the size and potential of the idea. They’re not looking for small-to-medium deals.

Ian Bowles, the state secretary of Energy and Environmental Affairs, judged the first competition in 2008. In supporting FloDesign as the winner, he said he could see the start-up disrupting the entire wind power industry with its redesigned turbine, which uses short blades in a bonnet-like covering to funnel wind and greatly improve efficiency.

“Part of it is, how realistic is the game plan to go from prototype to commercial scale? But it’s also the underlying magnitude of the potential technology,’’ Bowles said. “FloDesign had a realistic, big idea.’’

Based: Cambridge
Results: Runner-up and best MIT team, 2009
Where it is now: Levant has contracts with the Army and vehicle manufacturers to prove its shock absorber that cuts fuel consumption, and expects to start commercial production in about 18 months. It operates from a 3,500-square-foot facility near Kendall Square and expects to increase staff over the next six months to about 10 from five.

Based: Cambridge
Results: Semifinalist, 2009
Where it is now: FastCap has raised more than $7 million in government and private funding and will soon move to a 17,000-square-foot facility in South Boston. It employs about 12 full- and part-time workers and expects to add five more this year.

Based: New York
Results: Semifinalist, 2008
Where it is now: EnergyHub, which employs about 25 people, is testing its home energy management products with several utilities across the country and expects to begin selling directly to consumers in the second half of this year. Its energy savings system was named a “Best Invention’’ in 2009 by Time Magazine.

Based: Wilbraham
Result: Winner, 2008
Where it is now: FloDesign has raised more than $50 million in private capital and government support, and is expanding over the next few months to Waltham, where it will be headquartered. The company expects to increase employment to about 75 from 30 by year end.
Your comment is subject to the rules of our Posting Policy
This comment may appear on your public profile. Public Profile FAQ