Firm says it will shoulder cost of Gulf cleanup 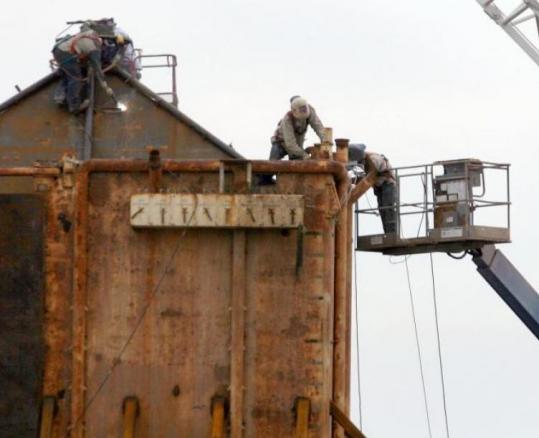 Welders worked on a BP subsea oil recovery system chamber yesterday in Port Fourchon, La. The company hopes to catch escaping oil and allow it to be pumped to the surface. (Sean Gardner/ Reuters)
By Campbell Robertson New York Times / May 4, 2010

NEW ORLEANS — reported some progress yesterday in its efforts to stem oil leaks from an undersea well off the Louisiana coast that have created what President Obama called a “potentially unprecedented environmental disaster.’’

Bill Salvin, a company spokesman, said that crews had finished building a containment dome, a 4-story, 70-ton structure that the company plans to lower into place over one of the three leaks to catch the escaping oil and allow it to be pumped to the surface.

Two more domes would be completed today, Salvin said, and crews hoped to install all three domes by the weekend.

“That will essentially eliminate most of the issues you have with oil in the water,’’ he said.

The company was also trying to install a shutoff valve at the site of one of the three leaks. But according to David Nicholas, a BP spokesman, after the stormy weather of the weekend, the seas at the site had still not calmed enough by midafternoon for the valve mechanism to be hoisted safely out of a support ship.

The efforts come as the National Oceanic and Atmospheric Administration said the oil slick appeared to be drifting toward the Alabama and Florida coasts and the Chandeleur Islands off Louisiana’s southern tip.

Miles of floating booms laid out on coastal waters in hopes of protecting the shoreline from the spreading oil slick were damaged over the weekend by the heavy winds and rough seas, the Coast Guard said. Roughly 80 percent of the booms protecting the Alabama coast were damaged.

“Some of it has been torn apart, some of it is repairable, some was relocated by the weather,’’ said Petty Officer David Mosley of the Coast Guard. “We’re looking to fix what we can fix and replace what we can replace.’’

Yesterday, BP said it would pay “all necessary and appropriate cleanup costs’’ from the disaster. Referring to the drilling rig that collapsed April 22 after a fire and explosion, causing the well it was drilling to leak, the company said: “BP takes responsibility for responding to the Deepwater Horizon oil spill. We will clean it up.’’

BP, which was leasing the Deepwater Horizon rig, has been working with government agencies and private companies but has been unable to stop the flow of crude from the well.

Bob Fryar, the company’s senior vice president for operations in Angola, who was brought to a command center in Houston for the engineering effort, said Sunday that BP hoped to install a shut-off valve on one of the three leaks yesterday to stop some of the oil flow there. But the leak that is spewing the most oil, at the end of the broken riser pipe that once connected the well with the rig, cannot be shut off that way, Fryar said.

A device known as a blowout preventer, a towering stack of heavy equipment at the wellhead, 5,000 feet below the surface of the Gulf of Mexico, was supposed to seal the well quickly in the event of a burst of pressure, but it did not work when the Deepwater Horizon oil rig exploded.

Fryar and Charlie Holt, BP’s drilling operations manager for the Gulf, described an audacious plan to confront the blowout preventer problem. In this approach, they would seal the well by cutting the riser at the wellhead, sliding a huge piece of equipment called the riser package out of the way, and bolting a second blowout preventer atop the first one.

The risk in such a maneuver — which would be performed by robotic submersibles tethered to ships 5,000 feet above — is that the pressure of the oil rising from the well could be overwhelming, and the well could gush oil at a far higher rate.

Officials still plan to take another step, drilling relief wells that would allow crews to plug the gushing cavity with heavy liquid, to provide a more permanent solution than the containment domes. Drilling work on the first relief well was set to begin as soon as the weather clears, but completing the wells will take months.