Said accident was ‘unlikely’ May be worse than feared 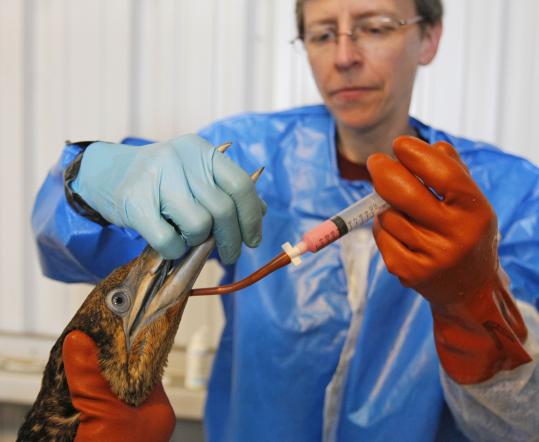 MOUTH OF THE MISSISSIPPI RIVER — downplayed the possibility of a catastrophic accident at an offshore rig that exploded, causing the worst US spill in decades along the Gulf coast and endangering shoreline habitat.

In its 52-page exploration plan and environmental impact analysis for the well, BP suggested that it was unlikely, or virtually impossible, for an accident to occur that would lead to a giant crude oil spill and serious damage to beaches, fish, mammals, and fisheries.

BP’s plan, filed with the federal Minerals Management Service for the Deepwater Horizon well, dated February 2009, says repeatedly that it was “unlikely that an accidental surface or subsurface oil spill would occur from the proposed activities.’’

And while the company conceded that a spill would impact beaches, wildlife refuges, and wilderness areas, it argued that “due to the distance to shore (48 miles) and the response capabilities that would be implemented, no significant adverse impacts are expected.’’

At least 1.6 million gallons of oil have spilled so far, according to Coast Guard estimates. Some experts said yesterday that the volume of oil leaking from the well could actually be much higher than that, and that even more may escape if the remaining drill equipment erodes further.

“Clearly, the sort of occurrence that we’ve seen on the Deepwater Horizon is clearly unprecedented,’’ BP spokesman David Nicholas said. “It’s something that we have not experienced before . . . a blowout at this depth.’’

Robert Wiygul, an environmental lawyer based in Mississippi and a board member for the Gulf Restoration Network, said he didn’t see anything in the document that suggests BP addressed the kind of technology needed to control a spill at that depth of water.

“The point is, if you’re going to be drilling in 5,000 feet of water for oil, you should have the ability to control what you’re doing,’’ Wiygul said.

Amid increased fingerpointing yesterday, high winds and choppy seas frustrated efforts to hold back the giant oil spill seeping into Louisiana’s rich fishing grounds and nesting areas, while the government desperately cast about for new ideas for dealing with the growing environmental crisis.

The seas were too rough and the winds too strong yesterday to burn off the oil, suck it up effectively with skimmer vessels, or hold it in check with the miles of orange and yellow inflatable booms strung along the coast.

The floating barriers broke loose in the choppy water, and waves sent oily water lapping over them.

The spill — a slick more than 130 miles long and 70 miles wide — threatens hundreds of species of wildlife, including birds, dolphins and the fish, shrimp, oysters, and crabs that make the Gulf Coast one of the nation’s most abundant sources of seafood. Louisiana closed some fishing grounds and oyster beds because of the risk of oil contamination.

Many of the more than two dozen lawsuits filed in the wake of the explosion assert it was caused when workers for oil services contractor Inc. improperly capped the well — a process known as cementing. Halliburton denied it.

According to a 2007 study by the federal Minerals Management Service, which examined the 39 rig blowouts in the Gulf of Mexico between 1992 and 2006, cementing was a contributing factor in 18 of the incidents. In all the cases, gas seepage occurred during or after cementing of the well casing, the agency said.

While the amount of oil in the Gulf already threatened to make it the worst US oil disaster since the Valdez spill in Alaska in 1989, one expert emphasized that it was impossible to know just how much oil had already escaped into the Gulf, and that it could be much more than what BP and the Coast Guard have said.

Even at current estimates, the spill could surpass that of the Exxon Valdez supertanker — which leaked 11 million gallons — in just two months.

Ian D. MacDonald, an oceanography professor at Florida State University, said estimates from both Coast Guard charts and satellite images indicate that 8 million to 9 million gallons had spilled by April 28.

“I hope I’m wrong,’’ McDonald said. “I hope there’s less oil out there than that. But that’s what I get when I apply the numbers.’’

Coast Guard Admiral Mary Landry brushed off a question during a news conference yesterday about estimates that suggested the rate of the leak was five times larger than official estimates.

“I would caution you not to get fixated on an estimate of how much is out there,’’ Landry said.

Doug Suttles, BP’s chief operating officer for exploration and production, said it is impossible to measure the flow. But he said remote cameras show the rate does not appear to have changed since the leak was discovered.

High seas were in the forecast through tomorrow and could push oil deep into the inlets, ponds, creeks, and lakes that line the boot of southeastern Louisiana.