Expects to put a man on Mars; long journeys into deep space 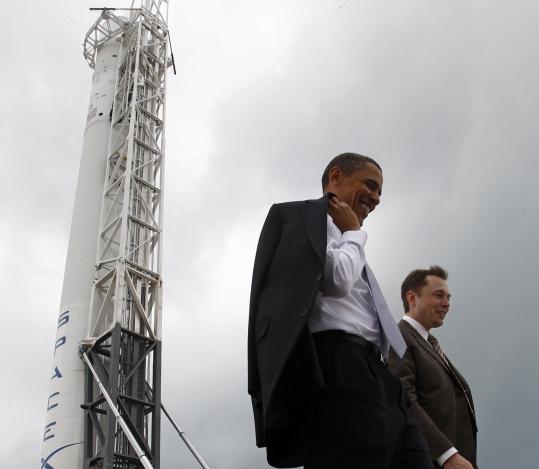 CAPE CANAVERAL, Fla. — President Obama boldly predicted yesterday that his new plans for space exploration would lead American astronauts on historic, almost fantastic journeys to an asteroid and then to Mars, relying on rockets and propulsion still to be imagined and built.

“I expect to be around to see it,’’ he said of pioneering US trips starting with a landing on an asteroid — a colossal feat in itself — before the long-dreamed-of expedition to Mars. He spoke near the historic Kennedy Space Center launchpads that sent the first men to the moon, a blunt rejoinder to critics, including several former astronauts, who contend his planned changes will instead deal a staggering blow to the nation’s manned space program.

“We want to leap into the future,’’ not continue on the same path as before, Obama said as he sought to reassure NASA workers that America’s space adventures would soar on despite the impending termination of space shuttle flights.

His prediction was reminiscent of President John F. Kennedy’s declaration in 1961, “I believe that this nation should commit itself to achieving the goal, before this decade is out, of landing a man on the moon and returning him safely to Earth.’’

Obama did not predict a Mars landing soon. But he said that by 2025, the nation would have a new spacecraft “designed for long journeys to allow us to begin the first-ever crewed missions beyond the moon into deep space.’’

“We’ll start by sending astronauts to an asteroid for the first time in history,’’ he said. “By the mid-2030s, I believe we can send humans to orbit Mars and return them safely to Earth. And a landing on Mars will follow. And I expect to be around to see it.’’

The biggest criticisms of Obama’s plans have been that they have lacked details and goals. His speech yesterday was an attempt to answer those complaints, especially since an asteroid is the next step away from Earth’s reach.

Asteroids zip by Earth fairly often and have occasionally smacked the planet with disastrous results. Asteroids have been blamed for the extinction of the dinosaurs, for example.

Landing on an asteroid would give scientists a better idea of how to handle a future killer asteroid that could wipe out much of life on Earth. It would also be a feat sure to win great attention.

“I think he said all the right things’’ in declaring a commitment to space exploration, said George Washington University space scholar John Logsdon, who has served on several NASA advisory boards. “I don’t know what more you could have asked for.’’

“The president’s new plans for NASA are flat-out irresponsible,’’ Vitter said. “He has evidently decided . . . that it’s time for us to simply walk away from manned space exploration for the foreseeable future, with no clear timeline for returning or for achieving any of our goals for deep space exploration.’’

Obama said he was “100 percent committed to the mission of NASA and its future.’’ He outlined plans for federal spending to bring more private companies into space exploration following the soon-to-end space shuttle program.

He acknowledged criticism for his drastic changes to the space agency’s direction. But, he said, “the bottom line is that nobody is more committed to manned space flight, the human exploration of space, than I am. But we’ve got to do it in a smart way. We can’t keep doing the same old things as before.’’

Obama said the space program is not a luxury but a necessity for the United States.

He noted that the Kennedy Space Center has inspired the nation and the world for half a century. He said NASA represents what it means to be American — “reaching for new heights and reaching for what’s possible’’ — and is not close to its final days.

Obama sought to explain why he aborted President George W. Bush’s return-to-the moon plan in favor of a complicated system of public-and-private flights that would go elsewhere, with details still to be worked out.

“We’ve been there before,’’ Obama said of the nation’s moon landings decades ago. “There’s a lot more of space to explore.’’

He said his administration would support continued manned exploration of space “not just with dollars, but with clear aims and a larger purpose.’’