Allow scientists to trace processes that led to cosmos 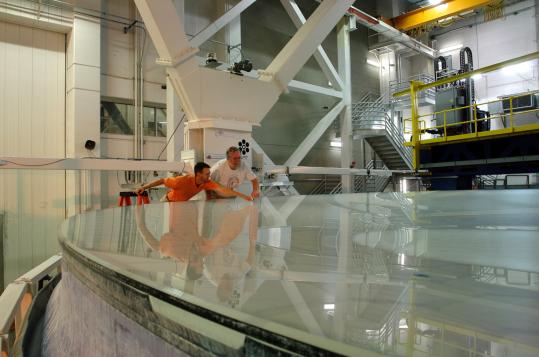 Buddy Martin (left) and Dean Ketelsen of the Steward Observatory Mirror Lab in Tucson inspected a mirror for the Giant Magellan Telescope. The telescope will have an 80-foot-diameter light-gathering area and will cost about $700 million. (Ray Bertram/ Steward Observatory)
By John Johnson Jr. Los Angeles Times / November 29, 2009

TUCSON - If there were a Guinness record for making telescope mirrors, Dean Ketelsen probably would win it. Colleagues boast that the onetime Iowa farm boy has ground and polished more square footage of optics than any other human being alive.

“It used to be a mysterious thing that hunch-backed people in white coats did,’’ the 55-year-old technician said while taking a break at the University of Arizona’s mirror lab. “Now we use machines to grind the glass. They’ve taken a lot of the black arts out of it.’’

Maybe so. But Ketelsen can’t help being as proud as a soccer parent of his latest achievement. Resting behind him in the laboratory under the university’s football stadium was the first of seven huge mirrors being made for the Giant Magellan Telescope. One of a new generation of super-large, ground-based telescopes being constructed around the world, the Giant Magellan’s 80-foot-diameter light-gathering area will dwarf all other telescopes.

Not since the 1980s, when the last generation of big telescopes was built, led by the twin 33-foot Keck telescopes on Mauna Kea, Hawaii, has there been such an air of anticipation in astronomy. The Magellan instrument, powerful though it will be, is the smallest of three monstrous telescopes in various stages of construction. Together, they at last will pull back the curtain from the universe’s birth chamber, allowing scientists for the first time to study the processes that created today’s mature cosmos of planetary systems, stars, galaxies and galaxy clusters - all flying apart at breakneck speed.

“We’re going to be able to peer back into the universe’s Dark Ages, when everything got started,’’ said Chuck Steidel. Steidel is an astronomy professor at California Institute of Technology, which, in combination with the University of California, is planning the Thirty Meter Telescope at Mauna Kea.

Even its 98-foot-diameter light-collecting area will pale next to the European Extremely Large Telescope, which will possess a collecting area 138 feet across. For comparison, consider that the famous telescope on southern California’s Mount Wilson, with which Edwin Hubble made some of the greatest scientific discoveries of the 20th century, had a mirror slightly larger than 8 feet across.

The official date of “first light,’’ when all three telescopes begin their work, is 2018. The real date is a secret, because all three are racing to be first.

“Being first matters,’’ said Gary Sanders, who is designing the Thirty Meter Telescope. “When you open a window, the first to look through it sees the most exciting things.’’

Scientists like to refer to big telescopes as time machines, because the farther into space they peer, the more ancient the light they are seeing. Currently, the best time machines are the Keck telescopes and a handful of others in that size range, as well as the Hubble Space Telescope. The new telescopes will be anywhere from 10 to 100 times more sensitive than those.

They will scroll the calendar back more than 13 billion years, to the era when the first structures in the universe began forming out of the murky plasma that dominated the first few hundred thousand years after the Big Bang. That era is referred to as the Dark Ages because the universe, mostly made of hydrogen atoms, was neutral and opaque, without stars.

The next 5 billion to 6 billion years was when the universe developed into the form we know. “We have an inkling of how that worked, but TMT will allow us to understand the details,’’ Steidel said.

“We’re going to be able to witness the first galaxies assembling,’’ said Wendy Freedman, director of the Carnegie Observatories, which is building the Giant Magellan Telescope in South America. “We’ll also be able to study the first black holes.’’

The James Webb Space Telescope, the successor to Hubble being built by Northrop Grumman Aerospace Systems. Scheduled to launch in 2013, the infrared space telescope is expected to cost at least $3.5 billion.