Why is getting scared silly sometimes such fun? 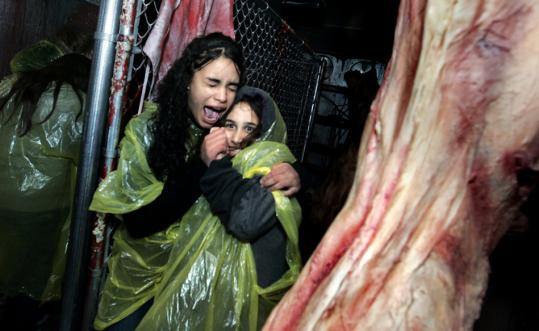 Alyssa Marks (left) and Atlanta Juares clung to each other as they bumped into a rubber torso hanging from a meat hook at SpookyWorld in Litchfield, N.H. (Cheryl Senter for The Globe)
By Carolyn Y. Johnson Globe Staff / October 31, 2009

As a child, Kathy Sherman used to sneak into the basement late at night to watch movies that scared her so much she couldn’t sleep. Now she’s a florist during the day, but on her own time Sherman organizes meetings of horror fans and visits haunted houses. She has tried bungee jumping and skydiving.

“Oh my God - being scared, you can feel your heart pounding out of your chest, your skin feels like it’s getting goose bumps, your hair feels like it’s standing up, you jump out of your seat. You get all hyped up and you come back down. It’s just fun,’’ said Sherman, a resident of Randolph.

To neuroscientists, Sherman is describing classic fear, the same emotion that primes the body to flee or fight predators, and that, when it goes terribly awry, causes disabling anxiety disorders or phobias. So as children and grownups alike celebrate all things frightful this Halloween, the question arises: Why do Kathy Sherman and so many of us indulge in fear for fun?

The National Institutes of Health doesn’t give out million-dollar grants to better understand why people enjoy haunted houses or vampire movies, but scientists who study the biology of fear say their work suggests that the rush of hormones and the heart-racing thrill produce a sensation of pleasure while another part of the brain kicks in to let people know they won’t get hurt.

“In the case of people who are thrill seekers . . . when they encounter something scary or bad, they’re going to have this endorphin rush. But there’s also a part of the brain that knows it’s not really a bad thing,’’ said neuroscientist Ki Ann Goosens of the McGovern Institute for Brain Research at MIT.

Getting spooked at a haunted house is, on the surface, nothing like the actual danger of being chased by a tiger, or the terrors soldiers encounter in war and are often haunted by long afterward. But scientists say that fear - whether for survival or for entertainment - starts with the same basic brain circuit.

The almond-shaped amygdala, which specializes in processing fear along with other emotions, sends signals to the rest of the body. The heart starts racing, preparing the body to fight or run by delivering more oxygen to muscles. Hormones such as endorphins are released, allowing the fearful person to temporarily ignore pain or fatigue. People literally freeze with fear, stopping to assess the situation in the dark alley before deciding how to proceed. Goose bumps pop up, a response that once may have helped animals appear bigger - much as a cat swells its coat when it wants to intimidate.

Such fear doesn’t become debilitating in the face of threats we know are fake because another part of the brain, the frontal cortex, signals that the person is, for example, at the zoo and the snake is in a cage.

In anxiety disorders, the fear is not quelled by reason, said Paul J. Whalen, a neuroscientist at Dartmouth College. But in normal cases in which the fear properly subsides, people may enjoy being scared because it gives their brains a rush.

“Maybe that’s a way to think about what we do when we go to a horror movie. We get to put ourselves and our brains through one of these what-if scenarios, one of these scary, imagined scenarios without any actual danger - that’s the fun of it, you get to give these fear circuits a workout,’’ Whalen said.

Jennifer Lerner, director of the Harvard Decision Science Laboratory at Harvard’s Kennedy School, described a theory that some people are “understimulated’’ and can feed off the arousal of a predictable fear such as a roller coaster.

In a modern world with few predators, fear may seem not to matter as much. A 2006 study by Whalen found that fear is the facial expression people reported seeing the least over their lifetimes. Still, good old-fashioned fear has a key role to play in modern life because it is an adaptive emotion, allowing people to learn what to fear - not to touch a hot stove, for example - and what not to fear. And in some ways, the modern environment may confront us with a new landscape of fear-inducing events.

“We don’t have cheetahs jumping out of bushes in our world, but we do have deadlines,’’ said Bill Carlezon, director of the Behavioral Genetics Laboratory at the Harvard-affiliated McLean Hospital in Belmont. “What we’ve done is take a system for high-intensity stressors that should be short and imposed on it this low, chronic boil, this simmer.’’

Fear can be harmful if sustained over long periods. Chronic elevated levels of cortisol, a hormone released when a person is fearful, increases the risk of many diseases.

But in small doses, fear can simply be fun. Sherman, the horror enthusiast, has experienced real scary moments - she witnessed a horrific accident, and on a camping trip, she heard a bear outside her tent. She prefers faux fear.

“We had nowhere to go, had to lay really still - that was a massive adrenaline rush,’’ Sherman recalled. “It’s a little bit different adrenaline when you know they’re horror movies, you know it’s acting, it’s kind of fun.’’