Climate change is blamed for opening of path 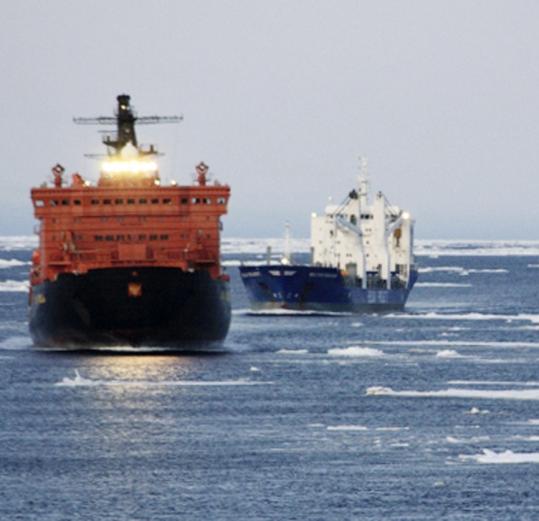 The MV Beluga Fraternity and MV Beluga Foresight traveled through the Northeast Passage without incident. The ships began their journey from South Korea in late July. (Beluga Shipping via Associated Press)
By Matt Moore and Seth Borenstein Associated Press / September 12, 2009

They traveled from Ulsan, South Korea, in late July to Siberia by way of the Northeast Passage, a sea lane that, in years past, was avoided because of its heavy ice floes.

Now the German-owned ships are poised to complete their journey through the cold waters where icebergs abound, heading for Rotterdam in the Netherlands with 3,500 tons of construction parts.

Scientists report that the Arctic Ocean ice cap has been shrinking to unprecedented levels in recent summers, because of global warming, opening up many passages that were ice-choked in earlier times.

In July, new NASA satellite measurements showed that sea ice in the Arctic was shrinking in area and thinning dramatically.

Niels Stolberg, president of Beluga, which is based in the German city of Bremen, called it the first time a Western shipping company successfully transited the Northeast Passage.

“To transit the Northeast Passage so well and professionally without incident on the premiere is the result of our extremely accurate preparation as well as the outstanding teamwork between our attentive captains, our reliable meteorologists, and our engaged crew,’’ Stolberg said.

He said the shipping company was planning more voyages through the area in the coming months. Traditionally, shippers traveling from Asia to Europe have to go through the Gulf of Aden and through the Suez Canal into the Mediterranean Sea and, pending their destination, into the Atlantic Ocean.

A journey from South Korea to the Netherlands, for example, is about 12,658 miles. By going northward and using the Northeast Passage, about 3,452 miles and 10 days can be shaved off, which translates into lower fuel costs.

“We are seeing an expression of climate change here,’’ said Mark Serreze, director of the National Snow and Ice Data Center in Boulder, Colo. “The Arctic is warming; we’re losing the sea ice cover. The more frequent opening of that Northeast Passage is part of the process we’re seeing.’’

“The Arctic is becoming a blue ocean,’’ Serreze said.

For the last few years, navigator Roald Amundsen’s famous Northwest Passage has been navigable. Then in 2007, the more crucial deep water channel called McClure Strait opened up and now the Northeast Passage, Serreze said. The passage “is the traditional choke point,’’ Serreze said.

That northern route “is going to become more and more open on a seasonal basis,’’ Serreze said. But it will not be consistently open because of local weather patterns that could still freeze it up for long time periods.

This year is shaping up to have the third-lowest amount of Arctic sea ice on record, just behind the worst year set in 2007 and in 2008. But just because 2009 is slightly up from the past two years, it is not an upward trend or a recovery, Serreze said. It reflects a change in local weather patterns that occurred in August, he said.

“It’s certainly part of the overall decline of sea ice that we’ve been seeing,’’ Serreze said.

Both ships, which carried cargo for a power plant project in Surgut, Siberia, were escorted by a pair of Russian icebreakers during portions of their journey. The Beluga Fraternity left South Korea on July 23, followed by the Beluga Foresight on July 28.

They arrived at the Novy Port, a major Russian shipping one on the west side of the Ob Gulf, an open body of water that stretches from the Ob River delta in the south to the Kara Sea in the north.

Verena Beckhusen, a spokeswoman for Beluga, said the Beluga Fraternity had already hoisted anchor and left Novy Port on Thursday.

The Beluga Foresight is scheduled to cast off today after its departure “was postponed due to bad weather.’’

Russia has long used its northern coast for shipping fuel, supplies, and other goods to its remote Arctic settlements, though funding for such shipments dwindled after the Soviet collapse.