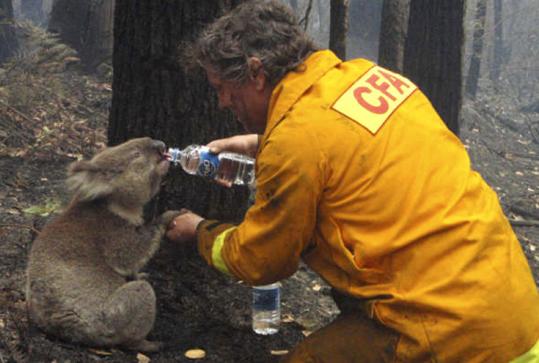 HEATING UP - Global warming cannot be blamed for starting the wildfires across Australia, but the effects of climate change exacerbated their ferocity, some specialists said last week. Eucalyptus forest and farms of Australia are becoming warmer, drier, and more prone to fire as the planet heats up, they warned. Firefighter David Tree shares his water with an injured Koala at Mirboo North. (mark pardew/associated press)
February 16, 2009
Text size – +
PSYCHIATRY
Memory is a funny thing. We need it to perform daily tasks and to remember the names of our loved ones, but traumatic memories can also cause psychiatric illnesses, such as post-traumatic stress disorder.

While such disorders can be treated, the relapse rate can be as high as 60 percent. The reason? It's hard to forget fear, and until treatments and therapies can permanently remove the underlying memory, the disease can remain difficult to treat.

Merel Kindt, a clinical psychologist at the University of Amsterdam, has found that use of a common high blood pressure drug may help disrupt the process that leads to the brain encoding a fearful memory.

Kindt and colleagues showed pictures of spiders to study subjects, and combined that with a mild shock to create a fearful association. Then, half the participants were given propranolol, a beta-blocker often used in heart disease. The other half were given a placebo pill.

At the end of the three days, researchers again presented the pictures of the spiders, but without a shock. Subjects who had taken propranolol at the time of memory recall had a decreased fear response, but the placebo group continued to be startled. "The drug probably blocks the process that restores the fearful memory," says Kindt.

So can beta-blockers be used to erase our fearful memories? "We have a long way to go before this finding can be clinically applied. We still need to identify all the factors that influence memory," she says.
BOTTOM LINE: Propranolol may play a role in disrupting the process that encodes and re-stores a fearful memory in the brain.
CAUTIONS: It's unclear whether the three-day findings apply to a memory created over the long term.
WHAT'S NEXT? Researchers plan to vary the duration of exposure to fearful stimuli to see if the results hold.
WHERE TO FIND IT: Nature Neuroscience, Feb. 15, 2009.
SUSHRUT JANGI

Electronic prescribing systems are designed to improve patient safety by, for example, flagging a patient's allergy to a drug or pointing out potentially dangerous interactions with other drugs the patient may be taking.

But a new study shows that physicians are overriding most of those alerts, suggesting they are seen as more of a nuisance than a valuable tool.

A research team including Dr. Saul Weingart of the Dana-Farber Cancer Institute analyzed 3.5 million electronic prescriptions ordered over three months by 2,872 clinicians in community outpatient practices in Massachusetts, New Jersey, and Pennsylvania. Alerts signaled a warning for about 6 percent of those prescriptions, mostly for drug interactions.

The clinicians overrode more than 90 percent of the alerts about drug interactions and 77 percent of the drug allergy alerts. Doctors were slightly more likely to change the medications they were ordering if the alert highlighted a high-severity interaction, depending on the kinds of drugs. They were less likely to accept the alert if the patient had already been taking the medication being ordered.

CAUTIONS: The study looked at only one electronic prescribing system, although the alerts are typical.
WHAT'S NEXT: Alerts can be improved by adjusting severity levels, and customizing them by case history.
WHERE TO FIND IT: Archives of Internal Medicine, Feb. 9