The blurry line between life, nonlife 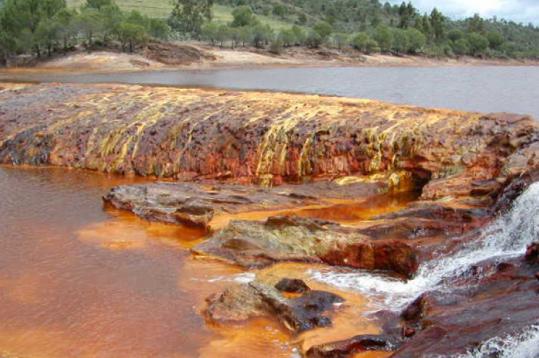 Iron oxide, which gives the water and rocks its red hues, may be more than a mere mineral, according to geobiologists. (NASA)
By Colin Nickerson Globe Correspondent / January 12, 2009
Text size – +

CAMBRIDGE - It's new science - so new that its name has barely taken hold - and it's brimming with notions that only a few years back would have been laughed off as lurid science fiction.

Geobiology, it's mostly called, although some of its leading lights stick to their old professional dogtags, such as biologist, geologist, hydrologist, biochemist. Others prefer more cosmic nomenclature: Astrobiology.

In any event, it is wild and wooly research occurring "on the frontiers of so many disciplines," said geobiologist Dianne K. Newman of the Massachusetts Institute of Technology.

Geobiology is, in part, about looking for life or life's graffito - and finding it - in unusual places: deep in ancient rock, in super-heated waters of undersea volcanic vents, and beneath the ice of Greenland.

But geobiology can also be about fashioning crude "proto-cells" from chemical goop resembling primeval ooze, work done recently in the Harvard/Massachusetts General Hospital laboratory of geneticist Jack W. Szostak to study how lifelike entities might have arisen in the extreme environment 3.5 billion years ago.

The emergent field rests on the idea that the dividing line between life and nonlife is blurrier than science has long believed. And that the minerals and chemicals of the earth are constantly interacting with living things in unexpected ways.

That means the origins of life can only be understood as shaped by the larger environment, and - by the same token - the nonliving environment can be understood only in the context of the fast-multiplying organisms that shaped it right back.

"Evolution is not something that happened solely to organisms," said Robert Hazen, a research scientist with Washington's Carnegie Institution. "There has been co-evolution of the geosphere and the biosphere."

Said geobiologist Lisa M. Pratt of Indiana University: "Turns out, establishing where geochemistry ends and life begins isn't always so easy. We know surprisingly little about the origin, evolution, and limits for life on earth. But we're on the cusp of dramatic new understandings."

Twitches of life are showing up where life shouldn't exist. In southern Africa, for example, scientists burrowed 2 miles beneath the earth's surface, discovering bacteria that feed on radioactive rocks.

"That's crazier than any science fiction," said Pratt, part of the team that made the 2006 discovery. "This is life that shouldn't be there. Except it is."

In the minds of some geobiologists, including Pratt, the existence of these "extremophile" microbes hints that life is such sturdy stuff that it might seed itself on any planet possessing a bit of water.

"Stardust contains all the [chemical] building blocks of life," she said, referring to primal matter forged by the Big Bang. "And it rains down on all planets. Life may be commonplace [on other planets], not some rare event. Earth may be singular only in that life has proved highly durable, hanging on through various cataclysms to evolve into sophisticated forms."

In her office, MIT's Newman keeps a sphere of smooth stone streaked by jagged red marks, reckoned to be 2.4 billion years old. Until quite recently, most scientists would have described the markings as merely the trace of iron oxide - a mineral - and left it at that.

But geobiology provides another, richer version.

Iron oxide, which occurs in various forms, is just iron that's been exposed to oxygen. But in that distant eon, only the barest whiffs of oxygen infused Earth's atmosphere. Much of the new oxygen building in the air was cast off by photosynthetic bacteria.

So the enigmatic red streaks on Newman's rock may be likened to a puff of breath left on a mirror - exhalations of early life captured for all time.

"Are we looking at a mineral trace?" said Newman. "Or are we looking at the bio-marker from some long-ago organism? Perhaps both. That's an exciting thing, life's signature within stone's substance."

Much work at Newman's lab focuses on the evolution of age-old bacteria.

In a strange twist, however, her latest research has spawned a discovery relevant to modern medicine.

Working with living bacteria to understand how their ancestors converted energy, Newman and colleague Lars E. P. Dietrich found clues in the metabolism of the microbes that could eventually help fight "cascading infections" that are the leading cause of death for cystic fibrosis patients.

For decades, researchers had thought that the classic blue-green mucous that forms in the lungs of cystic fibrosis patients were natural antibiotics secreted by infecting bacteria to kill competing microbes.

Instead, the new MIT research suggests, the vile-looking stuff - known as phenazine - consists mainly of "signaling molecules" used to form a protective biofilm under which the bacteria cluster in colonies. That understanding puts researchers closer to devising ways to more effectively attack the infections.

"We have a long way to go before we can test this theory," said Newman. "But it shows how this research can take some really surprising turns."

On another front, the Carnegie Institution's Hazen and colleague Dominic Papineau recently published research in the journal American Mineralogist arguing that minerals evolve just as surely as living organisms - a conclusion that raised some scientific eyebrows.

But Hazen defended the work, arguing that roughly two-thirds of the minerals on Earth have come to their present form by interacting with living organisms or life processes.

"Of the 4,300 mineral species on Earth, perhaps two-thirds are biologically mediated," Hazen said. "Mineral evolution is obviously very different from Darwinian evolution. Minerals don't mutate, reproduce, or compete. But the variety and abundance of minerals have changed dramatically over more than 4.5 billion years of Earth's history."

Colin Nickerson can be reached nickerson.colin@gmail.com.