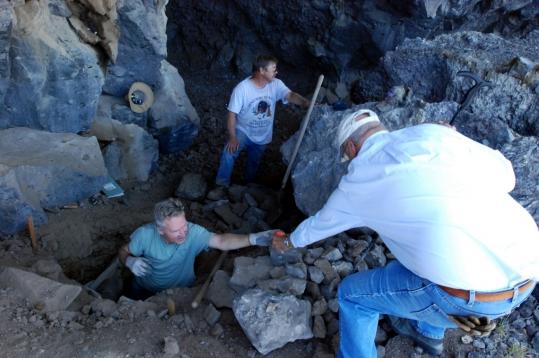 PAISLEY, Ore. - For some 85 years, homesteaders, pot hunters, and archaeologists have been digging at Paisley Caves, a string of shallow depressions washed out of an ancient lava flow by the waves of a lake that comes and goes with the changing climate.

Until now, they have found nothing conclusive - arrowheads, baskets, animal bones, and sandals made by people who lived thousands of years ago on the shores of what was then a 40-mile-long lake, but is now a sage brush desert on the northern edge of the Great Basin.

But a few years ago, University of Oregon archaeologist Dennis Jenkins and his students started digging where no one had dug before. What the team discovered in an alcove used as a latrine and trash dump has elevated the caves to the site of the oldest radiocarbon dated human remains in North America.

Coprolites - ancient feces - were found to contain human DNA linked directly to modern-day Native Americans with Asian roots and radiocarbon dated to 14,300 years ago. That's 1,000 years before the oldest stone points of the Clovis culture, which for much of the 20th century was believed to represent the first people in North America.

The idea that coprolites contain valuable information is not new, but extracting DNA from them is. When the findings were published this year in the journal Science, they plopped Jenkins and his colleagues in the middle of one of the hottest debates in North American archaeology: Just when did people first come here, and how did they get here?

For many years the prevailing view was that the Clovis people walked from Siberia across a land bridge exposed by the Ice Age to Alaska and spread south through an ice-free corridor down the center of the continent exposed 10,000 years ago by warming temperatures.

The Paisley coprolites indicate people had found another way, perhaps crossing the land bridge but then walking down the coast, or even crossing the ocean by boat, the way people went from New Guinea to Australia thousands of years earlier. The findings kill the suggestion some of the earliest Americans came from Europe.

And they almost didn't get to tell their story.

Bill Cannon calls himself a "used archaeological site salesman," but is really the US Bureau of Land Management's Lakeview District archaeologist. Cannon knew University of Oregon archaeologist Luther Cressman had dug here in the 1930s, along with numerous looters.

Cannon can show you the rusty nail Cressman drove into the wall of Cave No. 2 as his data point, from which the locations of artifacts are measured, as well as recent illicit excavations.

Cressman found evidence - a dart point, basketry, sandals, and animal bones - that people were here before Clovis and they hunted large animals. But he could make no strong conclusions, and he saved no coprolites.

Cannon could see there was a lot that hadn't been dug, and figured Jenkins was the guy to do it.

Jenkins is a senior research associate at the University of Oregon Museum of Natural and Cultural History, and head of its Northern Great Basin Archaeological Field School.

His office in a Quonset hut on the campus in Eugene is decorated with the antlers of mule deer he has shot in the high desert east of the Cascade Range. His arm carries a tattoo from an outlaw motorcycle club from Las Vegas, where he grew up and went to college.

Jenkins has never found one of the distinctively shaped, fluted, stone spear points that mark the Clovis culture, named for a site near Clovis, N.M., uncovered in 1929. But in three digs at Paisley - 2002, 2003 and 2007 - Jenkins has gathered 700 coprolites, perhaps a third of them human.

The coprolites contain pollen, seeds, chipmunk bones, sage grouse feathers, trout scales, things that ancient people would have been eating, but Jenkins couldn't be sure they weren't coyote. He had estimated their age at 1,000 years before Clovis from dating bone and obsidian flakes found nearby.

Unlike bone, obsidian cannot be radiocarbon dated. But the time since a flake was broken off can be estimated from how far moisture has penetrated, leaving a visible band.

The distance depends on temperature, so to refine the measurements, archaeological consultant Tom Origer and his team from Santa Rosa, Calif., tracked the underground temperatures for a year.

At $600 a shot, Jenkins still didn't want to get any of the coprolites radiocarbon dated until he knew they were human.

Then in the fall of 2003, he received an unexpected e-mail from Alan Cooper of Oxford University, who was looking for sites to test with techniques he was developing to extract ancient DNA from soils.