A witness to global warming 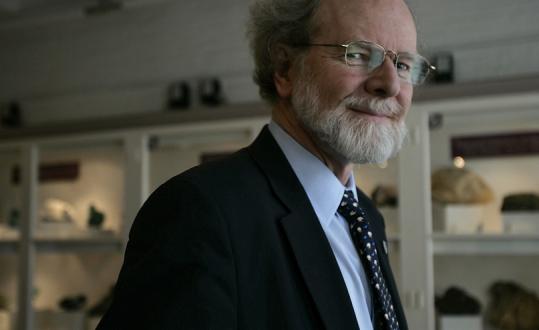 James McCarthy was once an intellectually restless young man with a passion for all things science who was certain of two things: He wanted to make a career out of science, and he didn't want to spend his time indoors, in a lab, or chained to a desk. And so, as Herman Melville once wrote of another restless young man in "Moby Dick," he thought he would "sail about a little and see the watery part of the world." McCarthy became an oceanographer.

What he didn't know at the time was that he was embarking on a four-decade journey from pole to pole where he would be chasing what has become the science story of our times - global warming.

McCarthy has been a first-person witness to the moment when a dangerous hypothetical became reality, and a gatherer of important evidence to support the theory that humanity is having a drastic impact on the earth's climate.

And with that insurmountable evidence, the Harvard professor of biological oceanography - like many in the field of climate science - has been forced to gently straddle the fine line between science and opinion. And add a bit of soothsayer to his job description.

There are, he says as he extends his arms, two potential scenarios. His right arm, which he holds a few degrees above horizontal, represents the "modest effort" scenario, where we commit to reducing carbon emissions.

His left arm, which is pointing upward at a sharp angle, represents "business as usual" where we do nothing about the dire predictions.

The world, he thinks, is starting to agree, thanks to "an articulate spokesman, Mr. [Al] Gore," whose documentary film, "An Inconvenient Truth," helped raise awareness of the dangers of climate change (McCarthy was a scientific adviser on the film).

And, last year, the climate issue was given even more validity when Gore and the Intergovernmental Panel on Climate Change (which McCarthy co-chaired from 1997-2001) were awarded the Nobel Prize for Peace.

"I think it's a very different statement about peace," said McCarthy, who traveled to Oslo with the IPCC delegation to accept the award. "It's a realization that if we really internalize and act on this statement about climate change, the world will be a more peaceful place."

Tonight, McCarthy will add another award to his mantel when he accepts the Boston Museum of Science's Walker Prize for "scientific investigation and discovery."

Paul Fontaine, the vice president of programs for the museum, said that McCarthy was chosen from dozens of nominees for his decades of work to understand the oceans as a global ecosystem and his ability to synthesize that research into a scientifically defensible view of our impact on the earth.

"What makes him stand out," Fontaine said, "is that he is an outstanding teacher and communicator, and he's really taken on a leadership role in this issue."

Yet for all the dire warnings about the climate catastrophe in the making, McCarthy, who is 64, with a gray, bushy beard and a warm demeanor, remains optimistic about the present and its willingness to have a positive impact on the future.

"We have turned a corner," he said. "People are feeling the urgency, and our politicians are following the people. Four years ago, it would have been unimaginable for any presidential candidate to say we need to restrict fossil fuel emissions by 80 percent by 2050. They would have been bulldozed. But now, they're all doing it."

McCarthy thinks we underestimate our ability to come up with technological solutions. He points to previous efforts to curb Freon, aerosol, and smoke stack pollutants as positive examples. "We started with baby steps and found that the rate at which we replaced all these compounds with alternatives was way ahead of anyone's projections."

He leans back in his chair and extends his arms again.

"The challenge for climate scientists is to present, with enough confidence, scenarios that show alternative paths."

He looks to his raised arm.

"As we move forward, we'll see that this isn't where we want to go. We'll see this is silly."

He changes his gaze to his lower arm, the "modest effort" scenario.

"When we show how successful this path could be, we'll ratchet it higher and higher.

"This is the generation that will make a difference. I know college students. I live with 400 of them," said McCarthy, who is the master of Harvard's Pforzheimer House.

"And I'm inspired by them. I'm very optimistic."

Education: Bachelor's degree in biology at Gonzaga University in 1966; PhD from the Scripps Institution of Oceanography in 1971

Family: Wife, Sue, handles the administration for Pforzheimer House; son, Jamie, 36, is a professor of medicine at the University of Texas-Houston; son, Ryan, 32, is an actor in New York.

Hobbies: Fly-fishing, telemark skiing, woodworking, and polar history. "And I do all my own auto repairs, and my cars are over 15 years old." No hybrid? "I'm waiting for when they're plug-in. Plus, manufacturing a new car leaves a large carbon footprint."