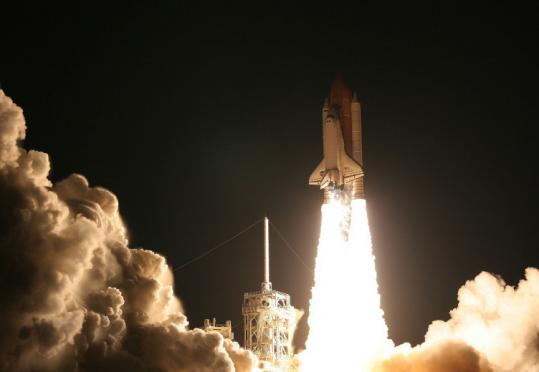 The space shuttle Endeavour will close in on a planned docking tonight with the International Space Station, which is about to become even more of a global scientific village with the delivery of the Japanese Kibo laboratory.

Kibo will join US, Russian, and European labs that were installed on previous missions. The most recent was the European lab Columbus, installed during the Atlantis mission several weeks ago.

"With this flight I believe that we finally became a real partner . . . not just one of the members on the list," said Keiji Tachikawa, head of the Japanese space agency JAXA.

The first stage of the Kibo lab will be affixed to the station during the 16-day mission, the longest ever.

The mission includes five challenging spacewalks as well, which is again the most for a single shuttle mission.

Along with the initial stage of Kibo, Endeavour carries a Canadian-built robot named Dextre that will be used for routine maintenance on the outside of the station, reducing the need for astronauts to venture into space.

At the end of each arm is a "hand" consisting of retractable jaws that will be used to grip objects in space.

NASA safety officials were reviewing video and photographs of the launch, but it appeared there was only one significant incident of insulating foam coming off the giant fuel tank that the shuttle is strapped to like a bull-rider.

The chunk of foam came off at about 83 seconds into the launch, when atmospheric forces are near their maximum.

Any foam coming off the tank then would be accelerated to potentially damaging speeds.

Possible foam strikes to the craft became a critical safety issue after the shuttle Columbia was lost in 2003, after a piece of insulating foam hit the left wing during launch, tearing a hole in it.

National Aeronautics and Space Administration engineers were also working on a pair of instrumentation glitches that surfaced during the jump to space. The primary cooling system shut down, causing controllers to switch to a backup system.

That problem has occurred from time to time in the past, usually because of ice getting in the system, according to a NASA spokesman.

The other problem was more unusual. Warning messages indicated a potential problem with the six steering thrusters, but it turned out to be a bad electronics card, NASA said.

Neither issue is expected to compromise the mission's performance or duration.

Endeavour's two-week trip to the station is the second of six planned shuttle missions this year as NASA hurries to finish construction of the station before the shuttle fleet is mothballed in 2010.

Five of the missions this year will be to the space station, floating about 220 miles above Earth.

The sixth is a planned servicing mission and repair job in August to the Hubble Space Telescope, about 350 miles up.