He sounds alarm on polluted oceans 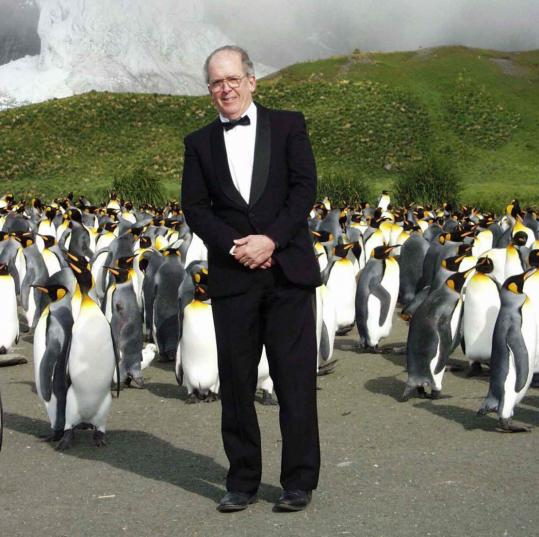 The first gift the whales gave Roger Payne was their song, which he in turn spread to the ears of the world.

He's planning to do the same with their final gift to him, the data locked inside the skin and blubber samples he gathered from 986 sperm whales on a 5 1/2-year, round-the-world journey.

His discovery, with a partner in the late 1960s, that humpback whales sing songs provided an ethereal soundtrack for the animal conservation movement, But the final gift is not going to be music to the ears. Because sitting inside those biopsy samples is the first overall baseline assessment of pollution in the world's oceans.

"What we've analyzed so far," Payne said, "is shocking. It's well beyond any degree of pollutants that I thought would exist."

Payne, 72, the founder and president of the Lincoln-based Ocean Alliance, is getting ready for his Al Gore moment. Once all the samples have been analyzed - the nonprofit conservation advocacy group needs about $1 million dollars in additional funding to complete the job - Payne is going to make it his mission to spread another inconvenient truth.

"If we don't do something about ocean pollution," Payne said from the study of his hillside home in South Woodstock, Vt., "I think there's a very good chance that humanity will lose access to fish from the sea. And because seafood is the principal source of protein for over a billion people, you could easily argue that this is the largest public health crisis in the world."

Yet the success of Gore and others in sounding the alarm on climate change has overshadowed many of the other potential disasters facing the planet. "Every time someone says 'the environment,' they think global warming," Payne said. Ocean pollution "is not even on people's radar." He wants to change that. It's time, he says, to go from "save the whales" to "saved by the whales."

Payne's journey to become one of the world's leading conservationists - in November, he accepted the Dawkins Prize for Animal Conservation and Welfare from Oxford University in England, and he was recently named a finalist for the 2008 Indianapolis Prize, the world's largest monetary award for animal conservation - began with a love for the sound of the wild world.

As a Harvard undergraduate, Payne worked with Donald Griffin, a professor who discovered animal echolocation - a biological sonar used by some mammals - by studying how bats navigate. At Cornell, Payne wrote his PhD dissertation on how owls can locate mice in total darkness based solely on hearing them move, and he did similar work on moths as a postdoc at Tufts.

By the mid-1960s, Payne had become increasingly concerned with the decimation of the wild world. Because his specialty was animal acoustics, he decided to focus on a threatened species for which sound was important - whales - though he had never even seen one. That's when he says he "lucked out like crazy."

In 1967, Payne traveled to Bermuda because he had heard that humpback whales regularly passed by its islands, and he happened to meet a man named Frank Watlington who was working for the US Navy using underwater microphones called hydrophones to listen for Russian submarines. Every now and then, Watlington would hear unusual sounds - the Navy classified them as "unidentified biologics" - and guessed that they might be whales.

Payne and another researcher named Scott McVay confirmed that not only were the sounds Watlington recorded coming from humpback whales, but the noises were in fact songs.

"We began listening and I thought, my god, these animals are repeating themselves, and it was the most beautiful thing I'd ever heard from the wild world," Payne said. "Back then, whaling was killing 33,000 whales a year, and it occurred to me that if we could get the music of the humpback whales into the ears of the world, we could stop the slaughter."

Payne released the album "Songs of the Humpback Whales," which became a hit. But the threats to whales are minor, he says, compared with the dangers of synthetic contaminants - "things with highly forgettable names like polychlorinated biphenyl and endocrine disrupting chemicals" - which he and his crew set out to document during a five-plus year journey aboard the Odyssey that ended in 2005. The concentrations of these manmade chemicals build up in animals high up the food chain, fish such as swordfish that are most often eaten by humans.

To study the level of this contamination at the top of the food chain, Payne and his team chose the sperm whale because males of the species are found in all oceans, while the females stay near the equator. By circling the equator, Payne and the Odyssey team let the males, which return there for breeding, bring them a global sample from places you can't go in a boat.

Can Payne really break through, to do for the oceans what Gore and company did for the atmosphere? Tom Eisner, a Cornell professor who has known Payne for 50 years, said he can think of no better communicator for the task.

"He's a fantastic speaker," Eisner said of Payne, who has teamed up in recent years with his wife, actress Lisa Harrow, for even more dramatic oomph during his presentations.

"But he's bright enough to know that to make an impact in conservation you can't rely on a sound bite anymore, like 'Save the whales.' People demand evidence now. And it was a stroke of genius for him to go out and get that evidence, using an animal he's already helped make a symbol for the plight of our times."

Education: Earned a bachelor's in biology from Harvard in 1956; doctorate in animal behavior and neurophysiology from Cornell in 1961; postdoc work in insect physiology at Tufts.

Family: Married to Lisa Harrow, an award-winning stage and screen actress from New Zealand. Payne has four children from a previous marriage: John, 45, a population biologist in Seattle; Holly, 44, a fisheries biologist at Cornell; Laura, 43, who studies shorebirds in Alaska; and Sam, 42, a circus acrobat who spent five years on tour with Cirque du Soleil.