Chimps prove to have better memories than college students 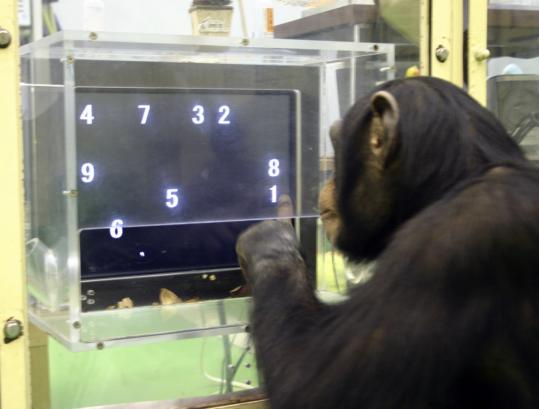 A chimpanzee named Ayumu performs a test in which he must recall the location of numbers. (AP Photo/Primate Research Institute, Kyoto/Tetsuro Matsuzawa)
Email|Print| Text size – + By Rob Waters Bloomberg / December 10, 2007

Young chimps made chumps out of college students in a contest requiring both groups of primates to recall a series of numbers.

Researchers at Kyoto University pitted five-year-old chimpanzees against their mothers and college students in a computer-based exercise that tested their ability to remember numbers. The chimps won, beating both their moms and the humans.

The findings challenge conventional wisdom, and the belief of most scientists, that humans are smarter than apes, the researchers said. Most previous studies of chimpanzee memory, though not all, have suggested that people have better memories.

"No one can imagine that chimpanzees - young chimpanzees at the age of five - have a better performance in a memory task than humans," said Tetsuro Matsuzawa of Kyoto University, the lead researcher, in a statement distributed by Cell Press, the publisher of the study. "Young chimpanzees have an extraordinary working memory capability for numerical recollection - better than that of human adults."

The study is published in the journal Current Biology.

The human and chimp contestants were briefly shown numerals from 1 to 9, and then blank squares, on a touch-screen monitor. The chimps had previously been taught those numbers in ascending order. The subjects had to remember which number had appeared in which place and touch the correct spot in the right order.

The chimps and students performed about the same initially, until the length of time the numbers were flashed on the screen was cut in subsequent rounds to as little as two-10ths of a second. The chimps then become the champs, outperforming the students.

The young chimps' strong performance is "just a part of the very flexible intelligence of young chimpanzees," Matsuzawa said.