Physiology studies show creature could not look up 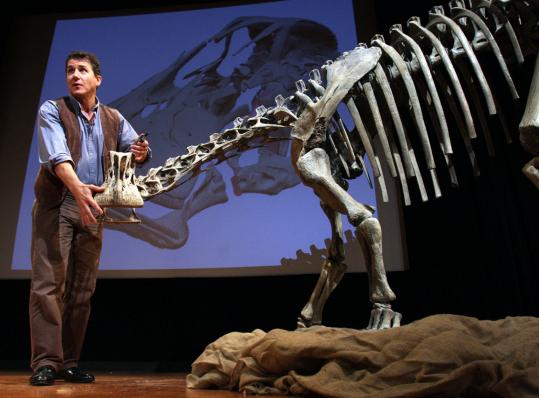 NEW YORK - It has been 60 years since French paleontologists found the dinosaur's bones in Saharan Africa, and 10 years since Paul C. Sereno of the University of Chicago began assembling a complete skeleton. Only now has his team recognized the plant-eater's peculiar anatomy and foraging behavior.

The researchers reported yesterday that the dinosaur, named Nigersaurus taqueti, had an unusually short neck, delicate bones, and a habitual head posture pointed toward the ground. Unlike the more common long-necked species, this was a ground-level browser like modern cows.

In a journal article and an interview, the paleontologist Sereno said this 30-foot-long dinosaur, with hundreds of teeth in its broad, squared-off jaws, probably lived on ferns, horsetails, and other ground vegetation. The 110-million-year-old species was discovered in Niger and is related to the North American dinosaur Diplodocus.

"We have seen nothing like this dinosaur," Sereno said. "It's a puzzle that says, 'figure this out,' and we think it's an extreme version of Diplodocus with the minimum amount of body structure it needed."

The scientists described the Nigersaurus anatomy and behavior in a report to be published next week in PloS ONE, the online journal of the Public Library of Science. Their research was partly financed by the National Geographic Society, which is featuring the results in the December issue of its magazine.

At the time the dinosaur lived, the land that is now Niger was a lush habitat with forests and large waterways, crawling with predatory 40-foot-long crocodiles. Nigersaurus had a body the size of an elephant.

CT scans of the dinosaur's skull, analyzed by Lawrence M. Witmer of Ohio University, showed details of the braincase and inner ear, from which the scientists inferred the animal's head posture. Neck bones also indicated that it could not look up.

The muzzle itself was odd. In contrast to other plant-eating dinosaurs, this one had more than 50 columns of teeth, all lined up along the front edge of the jaws, forming, in effect, a foot-long pair of scissors.

The CT scans of the jaw bones revealed up to nine replacement teeth stacked behind each cutting tooth. When one wore out, another immediately took its place, at a rate, perhaps, of one a month in each column.