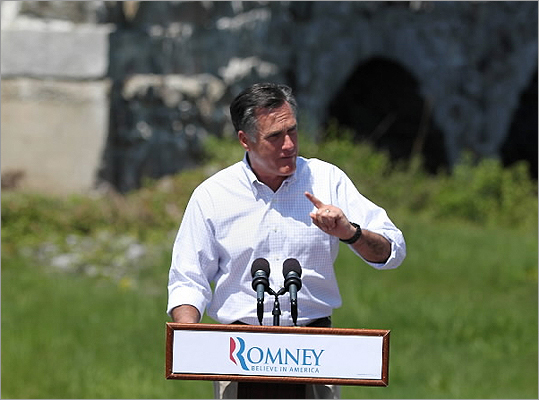 WASHINGTON — Mitt Romney this week made what seemed to be a presumptuous statement: that some countries — particularly Israel, the United States, and Chile — are more economically vibrant than their neighbors because of the cultures within those countries.

The comment triggered a firestorm, with Palestinian leaders calling it racist and his campaign trying to backtrack by saying Romney’s remarks were taken out of context. But over the past several days — as Romney himself penned an opinion article standing by them — it has become clear that they illustrate part of Romney’s core beliefs of the world, informing the underpinnings of his economic and global philosophies.

In one of his most striking, but little noticed, statements, Romney used a point made by author and former Harvard professor David Landes to state outright that certain cultures are better than others.

“The multiculturalism movement must be unmasked for the fraud that it is,” Romney wrote in his 2010 book, “No Apology: The Case for American Greatness.” “There are superior cultures, and ours is one of them. As David Landes observed, ‘Culture makes all the difference.’ ”

Landes did not respond to several requests for comment.

In a campaign that has been criticized by some who say it has been largely empty of original and thought-provoking ideas — one that has degenerated into name-calling and charges of law-breaking — the concept has triggered a vigorous debate. It also sheds light on a rare intellectual lodestar for Romney — normally a data-crunching candidate who avoids philosophical discussion — andilluminates his views of the world.

But his critics — including the author of a book Romney has juxtaposed against Landes’s — say the presumptive Republican presidential nominee is grossly oversimplifying the argument of what lies behind national economic success.

Jared Diamond, author of “Guns, Germs, and Steel,” wrote in an opinion article Thursday in the New York Times under the headline “Romney Hasn’t Done His Homework” that Romney had “misrepresented my views” and “oversimplified the issue.”

Romney has repeatedly contrasted Diamond’s argument that societies have grown as a function of their access to natural resources as a foil to Landes’s emphasis on their human characteristics.

Referring to one Romney quote in which he said the presence of “iron ore on the land” explained how some peoples became rich and powerful, Diamond wrote, “That is so different from what my book actually says that I have to doubt whether Mr. Romney read it.”

Diamond argued that Romney’s summary that “culture makes all the difference” is “dangerously out of date.” He said culture does play a role in determining relative levels of economic success, yet it is far from the only — or even the driving — factor.

A nation’s climate, its geography, and its natural resources all play important roles in determining a country’s wealth, Diamond said. Whether a nation is located on the water, for example, can determine whether it has access to trading ports. Tropical countries, where diseases spread more easily and farming is more difficult, tend to be poorer than those in temperate climates.

But geographic location does not tell the whole story, Diamond argues, nor do social mores.

“Rich, powerful countries tend to have good institutions that reward hard work,” he wrote. “But institutions and culture aren’t the whole answer, because some countries notorious for bad institutions (like Italy and Argentina) are rich, while some virtuous countries (like Tanzania and Bhutan) are poor.”

In his efforts to explain both his economic and social world view, Romney has been quoting Landes since at least early 2005, when he first began laying the groundwork for his 2008 presidential campaign.

“If we learn anything from the history of economic development, it is that culture makes all the difference,” Romney told a conservative audience in Spartanburg, S.C., in February 2005. “The cultural underpinnings of America are pretty clear: Americans work. We work hard.”

In making the point, Romney referenced Landes’s book, initially getting the author’s first name wrong, calling him Howard. But he would rarely stumble over his name again, as Landes would go on to become one of the authors Romney most frequently cites.

Romney mentioned Landes throughout his 2008 campaign, and has done so repeatedly this year in several of his prominent speeches — to promote his ideas on the economy at the University of Chicago; to inspire graduating evangelical students at Liberty University; and then, earlier this week, to a group of donors in Jerusalem.

It was there that Romney suggested that the Israeli culture was a key reason the country’s economy was more successful than that of the Palestinian territories.

Romney in the past had generally avoided actually comparing different cultures, but in 2010 he began highlighting economic disparities among specific nations.

“I thought of having been to Israel the first time and remarking at the extraordinary technology that the Israelis had built in their society,” he said at the National Press Club in March 2010. “And yet in the Palestinian areas, there was not that same level of technology and innovation. I looked at America versus Mexico. How could there be such a gap between two nations so close to each other? How can Argentina and Chile today even have such dramatically different prospects for their future, despite their proximity?”

It was a point Romney made again when he was in Jerusalem, in close proximity to the Palestinians, who were stung by the comparison. Palestinians contend that Israel’s control over movements of goods and people at border crossings hamstrings their economic growth.

But Romney has stuck by his comments. “The linkage between freedom and economic development has a universal applicability,” he wrote Tuesday inight n his National Review Online piece, in which he seems to broaden the definition of culture to include political and economic institutions. “One only has to look at the contrast between East and West Germany, and between North and South Korea for the starkest demonstrations of the meaning of freedom and the absence of freedom.”

Romney’s campaign did not respond to questions about his beliefs, when and how he started developing his ideas about culture influencing the global economy, and who else influenced him.

In his comments about a cultural role in the economy, he doesn’t address China, for example, a country whose political and economic practices he adamantly disagrees with but one whose economy is booming. He also doesn’t address whether he believes that the current economic woes in the United States are in any way attributable to a change in the country’s culture, or whether culture plays a role in economic differences in some of the poorer states in the South versus the wealthier Northern states.

It is unclear whether Romney has ever met Landes or spoken with him. During a 2008 speech before the Conservative Political Action Committee, Romney quipped, “He’s a professor emeritus at Harvard University. I presume he’s a liberal. I guess that’s redundant.”

Still, Romney’s philosophy echoes a view expressed byhis role model: his father, George, whose grandfather moved to Mexico and established a prosperous Mormon colony through what the family characterized as hard work. After they were forced to flee back to the United States, George Romney reflected on the tensions between Mexicans and Americans, once forced to live side by side.

“I was kicked out of Mexico when I was five years old because the Mexicans were envious of the fact that my people — who, when they went down there, were just as poor as the Mexicans they moved among — went to work with irrigation and dams and other things and became prosperous,” George Romney wrote in his autobiography. “The Mexicans thought if they could just take it away from the Mormon settlers, it would be paradise. It just didn’t work that way, of course.”