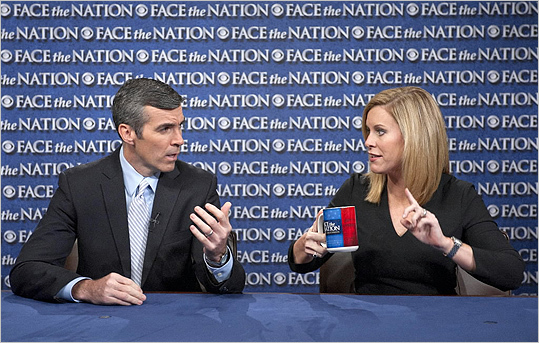 WASHINGTON — President Obama’s reelection campaign continued to hammer Mitt Romney on Sunday on the length of his tenure at Bain Capital and his limited disclosure on tax returns, while Romney’s side called the Democrats’ attacks an attempt to distract voters from the weak economy.

The Obama team rejected the Republican challenger’s demand that Obama apologize for his campaign’s suggestion last week that Romney might have committed a felony if the federal disclosures he filed about his work at Bain turn out to inaccurately reflect his role in the company.

“He’s not going to get an apology,” Obama’s deputy campaign manager, Stephanie Cutter, said on CBS’s “Face the Nation.”

But Obama campaign adviser David Axelrod downplayed Cutter’s suggestion last week that a crime may have been committed if Romney was listed on federal forms as Bain’s chief at a time when he was not involved with the company. In an appearance on CNN’s “State of the Union” on Sunday, Axelrod said the campaign is “not suggesting that based on what we know that he’s done anything illegal.”

The Bain controversy ignited after the Globe reported Thursday that Securities and Exchange Commission filings and other documents from Massachusetts showed Romney remained the sole owner and chief executive of the private equity firm until 2002.

Those filings appeared to conflict with statements the presumptive Republican presidential nominee made on his financial disclosure form submitted last month. On that form, Romney said that since Feb. 11, 1999 — the date he took charge of the Salt Lake City Olympics — he “has not had any active role with any Bain Capital entity and has not been involved in the operations of any Bain Capital entity in any way.”

Speaking Sunday on ABC’s “This Week,” New Hampshire Senator Kelly Ayotte, a Republican rumored to be a potential vice presidential pick, said the president’s focus on tax returns, outsourcing, and Bain Capital show he is not the inspirational leader he claimed to be.

“Unfortunately, with these attacks, it shows that he’s just a small politician and running on small-ball politics at a time when our country is facing grave, grave challenges,” Ayotte said, citing the weak economy.

The timing of Romney’s departure from Bain Capital is politically significant because he has disclaimed responsibility for any Bain dealings that led to layoffs, bankruptcies, or outsourcing after February 1999. The fact of Romney’s continued legal control over the private equity firm has raised questions about whether he can legitimately wipe his hands clean of all Bain Capital transactions after that time.

Massachusetts corporate records reviewed by the Globe on Sunday show that it was not until a span of several months in 2001 — more than two years after Romney said he retired from Bain Capital — that his partners established a new corporate structure to permanently run Bain Capital without him.

His partners formed a new set of corporate entities in April and May 2001 and then registered them with the Massachusetts secretary of state in October of that year, according to the records. In May 2001, Romney reported selling some stock that had been held by a Bain investment fund, a move Securities and Exchange documents said was related to a Bain Capital “reorganization.’’

Edward W. Conard, a managing director at Bain from 1993 to 2007, acknowledged on MSNBC Sunday that Romney was “legally, on documents’’ the chief executive of Bain after 1999. But he added Bain was run day to day by a management committee of Romney’s partners.

“We could hardly get Mitt to come back and negotiate the terms of his departure because he was working so hard on the Olympics,’’ said Conard, who, through a shell corporation last year, contributed $1 million to a super PAC supporting Romney’s presidential bid.

Romney has offered conflicting versions of why he he remained as chief executive after 1999. In 2002, Romney called his departure a “leave of absence’’ in official testimony in a gubernatorial ballot challenge. A few months later, just before he was elected governor, he responded to an advertisement attacking him for Bain-related layoffs at a steel mill by saying he had left Bain before the mill went bankrupt.

Once Romney made the decision to turn his leave of absence into a permanent departure from Bain, disentangling Romney’s investments and restructuring them to make him a passive investor would have been a complex matter. And Romney — known as a tough bargainer — was negotiating a severance package at that time that ultimately guaranteed him a significant slice of the Bain pie until 2009. Romney’s wealth is estimated to be at least $250 million, and could be much more, depending on how he accounts for his complex investments, including some held in offshore accounts.

Romney’s continued role in a position of legal authority as head of the firm — even though he said he ceded day-to-day operating control to other Bain partners in Boston — raises questions about how he approached his responsibilities to outside investors in Bain investment funds, Victor Fleischer, a corporate tax law specialist at the University of Colorado, said in an interview yesterday.

“For the Romney camp to dismiss that he would have anything to do with Bain because he was in Salt Lake City, that would seem to run counter to the relationship that Romney has as CEO of the management company, and the duties he has to the limited partner investors,’’ said Fleischer, an Obama supporter. “If they are saying he had completely left, that is inconsistent with the legal duties he has toward the investors. You can’t be an absentee CEO, legally.’’

Harvey Pitt, a former chairman of the Securities and Exchange Commission who is a Romney supporter, countered in an interview that questions about Romney’s responsibility to investors after 1999 are “garbage.’’ Pitt said he saw no conflict in Romney’s public statements and SEC filings.

Romney’s 2010 tax return, which he released in January, showed some of his vast wealth is tied to offshore assets — a fact the Obama campaign has used to bolster its argument that as president Romney would look out for affluent Americans with exotic finances instead of middle-class workers.

Axelrod said Sunday that Romney furnished John McCain with 23 years of tax returns in 2008, when he was being vetted as a potential running mate for McCain, and that McCain chose Sarah Palin over Romney. Axelrod said, based on McCain’s decision, he can only conclude “that whatever is in those returns would be more damaging to [Romney’s] campaign than simply not releasing them.”

In his own appearance Sunday on CNN, Romney campaign adviser Ed Gillespie said that the former Massachusetts governor has exceeded any legal obligation by making public his 2010 return and an estimate for 2011 and argued that Romney’s two-year release is in line with recent precedent.

Despite Gillespie’s assertion that Romney is being “very transparent,” some Republicans have joined the Obama campaign’s call for Romney to release earlier tax returns.

“If you have things to hide, then maybe you’re doing things wrong,” Governor Robert Bentley of Alabama said Saturday at the National Governors Association meeting in Williamsburg, Va. “I think you ought to be willing to release everything to the American people.”