Profits for Mitt Romney, firm in both deals 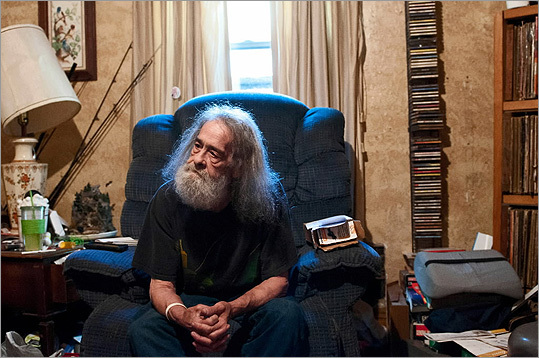 (William Lounsbury for The Boston Globe) Vernon Corliss is a former employee at GS Industries, a Kansas City, Mo., steel mill in which Bain Capital invested where 750 workers lost their jobs and much of their health and pension benefits.
By Brian MacQuarrie and Bobby Caina Calvan Globe Staff / June 5, 2012
Text size – +

FORT WAYNE, Ind. - As depicted in a campaign ad for President Obama, Mitt Romney and Bain Capital’s single-minded pursuit of riches led to bankruptcy and hundreds of layoffs at a Kansas City steel mill. In a dueling ad for Romney, Bain’s seed money for a start-up steel mill in Indiana created thousands of good-paying jobs.

One industry, two deals, opposite outcomes.

At GS Industries in Kansas City, Mo., the 750 workers lost their jobs and much of their health and pension benefits. At Steel Dynamics in Butler, Ind. - 600 miles to the east - the mill’s brisk business produced jobs that paid steel workers an average of $80,000 a year.

The common denominator is that Romney and his Bain Capital partners profited from both investments at both plants. Now each is being used to bolster political claims in a heated presidential race that will hinge on Romney’s track record as a businessman and Americans’ fears about job losses.

An on-the-ground look at the fortunes of these two Midwestern steel factories illuminates how Bain - which Romney built into one of the leading private equity companies in the United States - augmented its own investments with large amounts of debt and community taxpayer support to make forays into a rapidly changing segment of heavy industry.

In one case, Bain tried to prop up a traditional steel maker that was struggling. In the other, it bet on innovative technology and was able to declare a bigger and more lucrative victory.

“These guys are risk-based investors. You do it for a reward,’’ said Keith Busse, chairman of Steel Dynamics, the successful Indiana plant. “Sometimes you win, and sometimes you lose.’’

Bain invested $18 million in Steel Dynamics in 1994. In 1999, according to a Deutsche Bank report, the firm sold its minority stake for $104 million in a company that now employs 6,500 people and is the fifth-largest steelmaker in the United States.

“A lot of things would probably be different if they weren’t around,’’ said Dan Keller, 52, one of the company’s earliest employees. “High-paying jobs wouldn’t be here.’’

In Kansas City, Bain’s experience as the largest stakeholder in GS Industries was dismally different.

“We made the best steel in the country,’’ said Vernon Corliss, 69, who worked at GS Industries in Kansas City, and suffers from lung-damaging asbestosis. “And they took everything away from us - our jobs, our pensions, our health insurance - and that’s not right.’’

Bain invested $8 million in 1993 in what had been a plodding, old-line mill that was hemorrhaging jobs and losing business to cheaper imports. It later reinvested $16 million in the plant that it received from the sale of some GS Industries foreign assets. It extracted $36 million in dividends before the plant went bankrupt in 2001, according to Reuters. That would suggest a profit of over $12 million, but Bain officials say the firm made $8 million on GS Industries.

Bain and its partners bet that modernizing the plant, coupled with the prospect of continued profits from the steel balls it made for grinding, would justify the investment. The company also manufactured steel rods and such mundane items as wire hangers, barbed wire, and chain-link fencing.

“We liked the management team,’’ said Paul Edgerley, a Bain managing director who analyzed GS Industries before the investment. “We felt like it was a good chance to take an antiquated facility and update it.’’

That calculus was badly shaken by the Asian financial crisis in 1997, which opened the floodgates for cheap imports to the United States and accelerated GS Industries’ slide into bankruptcy in 2001.

In addition to the loss of jobs for 750 union workers, the federal government stepped in to cover $44 million in underfunded pensions.

Although Romney left Bain in 1999 to be lead organizer for the 2002 Winter Olympics in Salt Lake City, he continued to profit from the firm’s investments.

“I never thought of Bain Capital as a job creator. I thought of them as a wealth maker,’’ said US Representative Emanuel Cleaver, who was mayor of Kansas City when Bain bought the steel mill and now serves as cochairman for the Obama campaign. “I watched it with my own eyes go downhill.’’

A sense of betrayal still resonates among former employees at GS Industries, whose sprawl of factories once employed more than 4,500 people near the confluence of the Missouri and Blue rivers.

“It was a good living,’’ said Jeff Jones, who worked at the steel mill for its final seven years. He blames Bain Capital - and Romney, in particular - for what he says was a decision to set up the mill for failure.

Michelle Applebaum, a steel industry analyst based in Chicago, said that judgment is simplistic and flawed.

“They took a failing steel mill that would have been closed if they hadn’t put the money in,’’ Applebaum said of Bain. “The company didn’t fail because Bain was making money.’’

Mark Essig, who served as chief executive of GS Industries from 1998 to 2002, oversaw the plant’s closure. “The combination of low prices and high costs made the Kansas City plant a huge money loser,’’ Essig said. “We tried to do everything we could to change the fortune of that plant.’’

More than 600 miles to the east, at the Steel Dynamics mill in Indiana, Bain is not the four-letter word it is in Kansas City. Here, at the first mill built by a nonunion company that posted $8 billion in net sales last year, the steelworkers average $80,000 in income that includes performance-linked bonuses, corporate officials said.

Spread across 1,100 acres of former farmland, the Butler plant - a so-called minimill - makes thin steel sheets through a revolutionary, streamlined process that the lumbering behemoths that once epitomized the American industry could not replicate.

For Bain, the potential of this low-cost technology - which uses smaller, electric-arc chambers to turn scrap metal into molten steel - was enormously attractive. The advantages were many: new methods, proven management, and delivery times that were half of what the old companies, encumbered by inefficient blast furnaces, could meet.

The mill received about $37 million in state and local tax incentives to build in northeastern Indiana rather than Michigan or Ohio, where the company also looked, including the benefits of a special income-tax levy on county residents for infrastructure improvements. Company officials said taxpayer support was important to create jobs, while others saw “corporate welfare.’’

Unlike many of its competitors, Steel Dynamics’ cheaper costs helped it prosper despite the imports that badly damaged the domestic industry.

“Even though it’s very risky to do start-ups, we felt like they had good experience to build this kind of mill, with new and more efficient technology that would make it competitive globally,’’ said Edgerley, who also vetted the Steel Dynamics investment.

In both Kansas City and Butler, GE Capital, the investment and financing arm of General Electric, approached Bain to suggest a partnership. Edgerley and a team of Bain Capital employees investigated the investment risks and decided that both businesses could be successful, although GS Industries looked to be the more difficult venture. To Edgerley, the echoes of the deals, as they are playing out in TV spots, are often painful.

“We try to partner with management teams to make businesses more successful and grow. Look, it hasn’t always worked, but it has in the vast majority of cases,’’ Edgerley said. “It’s being politicized, and I hate it.’’