Concerns over handling of ancestry questions 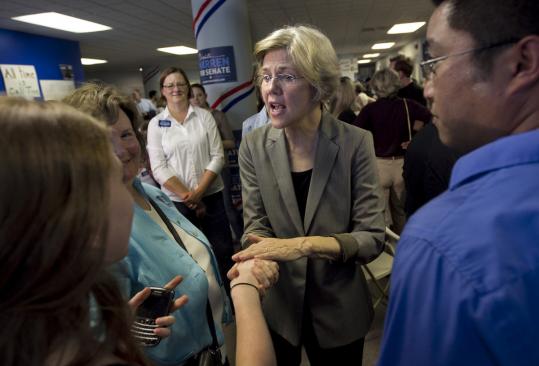 A day after Elizabeth Warren acknowledged that she told two Ivy League schools she was Native American, her campaign began scrambling to allay the concerns of supporters about her handling of the issue, while political observers questioned why she’d let the incendiary issue smolder for so long.

In an e-mail to supporters, Warren sought to explain why she couldn’t back up claims that she is a Native American with proof of ancestry - a federal requirement when universities report their diversity data - and tried to rally her base by characterizing the backlash as a Republican-fueled personal attack.

“What kid asks their grandparents for legal documentation to go along with their family stories?’’ Warren wrote. “But that’s not good enough for Scott Brown and the Republican Party. For several weeks now, they have orchestrated an attack against my family, my job qualifications, and my character.’’

Her comments prompted the candidates’ most personal war of words to date as the incumbent, Republican Senator Scott Brown, at an event in Worcester, quipped: “My mom and dad have told me a lot of things too, but they’re not always accurate.’’

Warren was incensed. “My mother and father are not here to defend themselves and should be off limits. Don and Pauline Herring are not fair game and Scott Brown should apologize,’’ she said in a statement. Brown’s campaign called the accusation “an attempt to escape personal responsibility for spending five weeks misleading the press and public.’’

As the candidates squabbled, a handful of Democratic party leaders spoke of growing concerns within the ranks that the issue could shake her strong support less than 48 hours before this weekend’s Massachusetts Democratic nominating convention in Springfield - an event that the party hoped to count as a highlight of the election season for Warren.

The constant drumbeat of questioning and growing skepticism of the political press corps has haunted Warren for more than a month, since it was first reported that Harvard touted her as Native American in its student newspaper.

Political observers said Thursday that the Warren campaign seemed to be ducking the issue in the hopes that it would go away - flouting the campaign tradition of quickly addressing a difficult issue to contain it.

“Politics 101: On issues that are potentially unfavorable, put all the information out, take the one-time hit, and move on,’’ said Darrell M. West, vice president and director of Governance Studies at the Brookings Institution. “That makes it a one-day story. The worst-case scenario is the story lingering for weeks and weeks, because it just creates doubts about the candidate.’’

“The whole concept of damage control is limiting the duration that you’re dealing with a story,’’ said strategist Chris Lehane. “This strikes me as an issue that the campaign may have known a little bit about but didn’t have their arms completely around. Instead they had to deal with a whole series of revelations.’’

A Warren senior staffer acknowledged Thursday that her campaign was unaware that Warren had been listed as Native American in any official capacity, before the news broke. Researchers they’d hired to scrub their own candidate’s background for biographical details that might erupt during the campaign had failed to warn them that the fair-haired, blue-eyed law professor began identifying herself 25 years ago as a Native American.

Warren’s campaign adviser Doug Rubin, maintained that the campaign took the issue seriously from the start, but that it took time for aides to gather all the facts necessary to answer questions “honestly and accurately.’’

Warren’s team was caught flat-footed by the assertions first raised in the Boston Herald on April 27 that Harvard described her as a minority years ago.

Two days later, it emerged that Warren had listed herself as a minority in directories of law school professors. She later maintained that she did not do so for hiring purposes, but to connect with “people like me.’’

But five weeks of fumbling led to her revelation Wednesday night to the Globe that she had personally reported herself as a Native American to the Ivy League law schools where she worked, the University of Pennsylvania and Harvard University.

The Democratic strategists who thought that the Warren campaign bungled the issue attributed the mishandling in part to the fact that she is an untested candidate.

“One of the benefits of having run for office multiple times is [that] you are no longer a pristine white sheet,’’ said Lehane. “There is already mud attached to you.’’

The most important strategy going forward, they said, is to prevent any further surprises.

“If there is anything else that isn’t public knowledge, it needs to be all out there in the next 48 hours. If there are more headlines and new aspects to this story over the summer, then it never goes away,’’ said Dan Schnur, director of the Jesse M. Unruh Institute of Politics at the University of Southern California, who worked on John McCain’s 2000 presidential bid.

Schnur contrasted the Warren controversy with the handling of a story during McCain’s 2000 presidential bid, when the Globe reported that McCain - who had denounced special-interest money - had written letters to the Federal Communications Commission on behalf of a communication company that helped him raise campaign money and let him use its corporate jet.

The McCain campaign responded four days later by releasing about 500 letters McCain had written as chairman of the Senate Commerce Committee since 1997. Not only that, Schnur said, the campaign “picked out the letters that had referenced contributors and explained why there was no quid pro quo.’’

The result, Schnur said, “was one difficult story.’’

Warren, by contrast, has faced a month’s worth of difficult press.

Still, some Democrats argue that the Harvard professor has not been hurt by her campaign’s delay in addressing the issue head-on. Recent polls show that Warren has not lost ground with voters since the controversy took root, in fact, Brown’s lead has narrowed in recent months.

“This is a hothouse media story that by every indication from the polls has had absolutely zero impact on the race,’’ said veteran Democratic strategist Bob Shrum.

But West said Democrats should not take too much comfort in recent poll results. “They’re taking a short-term perspective on what is a long-term problem,’’ he said. “Any issue that is controversial undermines people’s impressions of the individual. It may take awhile to move the vote needle, but it happens. And the longer it’s in the news, the more likely it will affect the vote.’’

Noah Bierman, Michael Levenson, Frank Phillips, and Sarah Schweitzer of the Globe staff contributed to this article. Stephanie Ebbert can be reached at Ebbert@globe.com. Follow her on Twitter @StephanieEbbert.