Anxious how faith will be perceived on grand political stage 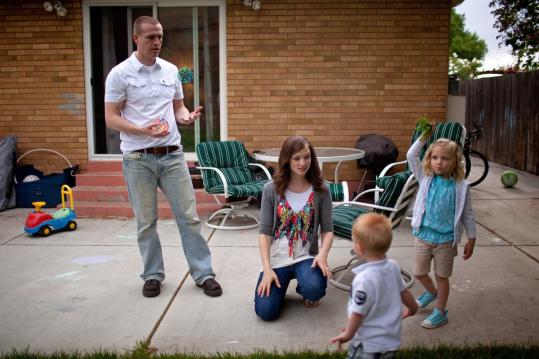 Bryan and Jenny Hamblin played with their daughter Lily, 4, and son Tennyson, 1, at their home in Ogden, Utah. (Erin Hooley for The Boston Globe)
By Matt Viser Globe Staff / May 29, 2012
Text size – +

SALT LAKE CITY - Tourists stroll among the faithful, their conversations competing with the birds and fountains. Old couples walk hand in hand amid a steady stream of brides and grooms emerging from the massive granite temple.

Temple Square, the world headquarters of the Church of Jesus Christ of Latter-day Saints, emanates harmony. But fresh anxieties pulse just below the surface.

For Mormons, this is a potentially volatile moment. They are deeply proud that their faith’s most prominent adherent, Mitt Romney, is steps away from a presidential nomination and could push the faith further into the mainstream of American life. With these feelings, though, comes a nagging fear that their beliefs, often misunderstood, will again be subjected to scrutiny, even ridicule, on a national scale.

“It’s something we’re afraid of. He’s going to be on the front line,’’ Steven Goaslind, a 30-year-old from Sandy, Utah, said on a recent sunny day as he pushed a stroller toward the temple. “It’s a mixed feeling for a lot of people. Hopefully the world’s gone beyond the bigotry.’’

The Goaslinds were among more than two dozen Mormons of various backgrounds interviewed on the promise and the possible risks of a Romney candidacy.

Fear of rejection or prejudice has been part of the Mormon story throughout the church’s history, most recently during Romney’s presidential bid four years ago. But this will be the biggest platform yet for a Mormon public figure, and the sense of risk is more acutely felt. Some of the faithful worry that their comparatively young religion is less prepared for what they will face than Catholics were when John F. Kennedy was running in 1960, or Jews were when Joe Lieberman was the vice presidential nominee in 2000.

“There’s a sense of we’re proud to have Mitt Romney doing so well,’’ said Quin Monson, a professor at Brigham Young University and a Mormon himself. “The other side of the coin is there’s sort of a sense of trepidation. Or nervousness. Sort of maybe even a fear of the impending maelstrom that I think a lot of Mormons widely believe is coming our way.’’

Some of what they fear is already being felt. Comedian Bill Maher, who is also a top donor to the super PAC supporting President Obama, has repeatedly referred to Mormonism as a cult. Governor Brian Schweitzer of Montana, a Democrat, in April said Romney’s struggles with Hispanic voters were “ironic’’ because “his family came from a polygamy commune in Mexico.’’

Some of the harshest comments have come from the right. Robert Jeffress, an evangelical pastor, last year called Mormonism a cult and said Romney was “not a real Christian.’’

Polls suggest a deep wariness about Mormonism persists among the American electorate. More than one in four respondents said having a Mormon president would be a cause of concern for themselves, their family, or people in their neighborhood or workplace, according to a recent Wall Street Journal/NBC News poll. The figure was higher than those who expressed concerns over a Hispanic, woman, or African-American president.

The challenges and questions about the faith are nothing new. Since the church’s first days - when, they believe, God appeared to a 14-year-old boy named Joseph Smith and asked him to restore the church as Jesus had envisioned it - adherents have faced significant adversity.

Early church leaders moved from New York to Ohio to Missouri to Illinois to Utah, each time being chased away by turmoil and hostile neighbors. In May 1844, Smith became the first Mormon to announce a presidential candidacy. A month later, he was killed by a mob.

Much of the animosity stems from the church’s departure from traditional Western Christianity. Among the core tenets are the beliefs that God has continued to reveal his messages after the ascension of Christ, that some of those revelations were in lost biblical texts that Smith translated into the Book of Mormon, that Christ visited America, and that the second coming and the establishment of the new Jerusalem will be in America.

Facing brutal backlashes, Mormon forebears once talked about seceding from the country that Romney now wants to lead, and his own relatives fled federal authorities to Mexico to continue what their faith initially called “plural marriage.’’

Today, adherents are protective of their faith but also conscious that its insularity and unconventional beliefs make it the frequent subject of skepticism, or worse.

“We have a strong cultural tradition of not responding to ridicule, of sort of keeping to ourselves, of trying to keep the most positive image of Mormonism in front,’’ said Joanna Brooks, a prominent Mormon author and blogger. Meanwhile, she added, “there are tens of thousands of Mormons cringing.’’

Church officials insist they are ready to defend their faith even while remaining assiduously out of the partisan debate. In the administrative complex that is a hub of money, power, and global influence for the Church of Jesus Christ of Latter-day Saints, officials are responding to criticisms with greater swiftness and seem to be laying the groundwork for a campaign that takes advantage of the spotlight.

Michael Otterson, the church’s head of public relations, said in an interview in his office in Temple Square that there will be “some very assertive messages coming out from the church over the next few months.’’ He declined several times to elaborate but said it could be “anything from an advertising campaign . . . to people having conversations with their Rotary Club.’’

“There is a cautious optimism across the church,’’ he said. “The optimism obviously because there’s so much of a conversation going on. The caution, because we’ve all seen over our lifetimes our beliefs misrepresented, and often by people with a vested interest.’’

Steve Shaw, a political science professor at Northwest Nazarene University and coauthor of “The Presidents and Their Faith,’’ said the closest parallel to Mormons and Romney is the way Catholics felt about Kennedy in 1960.

“There was this interesting debate: Are we ready for the presidency, and are they ready for us?’’ Shaw said.

He noted that some prominent Catholics were involved in advocating for Kennedy’s campaign, including Boston’s Cardinal Richard Cushing and New York’s Cardinal Francis Spellman, while the Mormon church has strict policies about its officials steering clear of politics.

Mormons have played prominent roles in politics: Romney’s father, George, ran for president in 1968, Representative Mo Udall ran in 1976, and Senator Orrin Hatch ran in 2000. Harry Reid is Senate majority leader. Yet no one of their faith has been this close to the White House.

For many Mormons, it is not just religious solidarity that draws them to Romney.

They cite hisrole running the 2002 Winter Olympic Games in Utah. They highlight his business background at a time when the economy is struggling. Many, in fact, were eager to detach Romney’s religion from the reasons they like him, saying their church taught them to evaluate candidates on the issues, not religious beliefs.

“I don’t think he runs from the values, but I don’t think he wants to set up his missionary flannel board and start preaching to the people out there why they should be Mormons,’’ Governor Gary Herbert of Utah, who is also Mormon, said. “But he ought not shy away, ‘Hey I’m a Mormon and here’s my values.’ ’’

Among Mormons, the feeling that their church is beginning a new chapter and gaining renewed attention extends beyond Romney’s run. “The Book of Mormon’’ musical debuted last year on Broadway, and the church launched an ambitious “I’m a Mormon’’ advertising campaign. Jabari Parker, one of the top high school basketball recruits in the country, was recently on the cover of Sports Illustrated and, in its pages, spoke openly about his Mormon faith. One of baseball’s sensations this year, rookie Bryce Harper, is a Mormon.

On a recent weeknight, as their two young children played and awaited an ice cream dessert, Bryan and Jenny Hamblin discussed Romney, and the so-called “Mormon Moment.’’ They both voted for Obama in 2008, but are undecided now. They appreciate the religious and family values they share with Romney but worry that he has tacked too far to the right.

“I feel we have two strong candidates, and it’s great,’’ said Jenny, 30, a stay-at-home mother. “But in other parts of the country. . . it’s about [President Obama’s] birth certificates or that Mitt’s great-great-grandfather had five wives.’’

They get frustrated by the focus on polygamy, a practice the faith’s leadership banned more than 120 years ago. They are tired of hearing the accusations they are a cult. They generally feel that Romney has been successful at talking about what he believes without getting into doctrine, and they are comfortable with Romney being the person many Americans associate with Mormonism.

Several observers point out that Romney may be able to do far more for the faith now than he ever has - whether as a missionary in France or a church leader in Massachusetts.

For a faith whose signature work has been going door to door to win converts - and whose adherents cheerfully answer questions by anyone who asks - Romney provides an amplified form of outreach.

“It will be good for the church, because many people around the world have really weird ideas of Mormons,’’ said Bob Bennett, a former US senator, a Mormon, and a Romney supporter, in an interview. “To have someone who is well educated, successful in his career, successful in his family have this high a profile sends the message to the world: The Mormons are not the crazy cult that many of you think we are.’’