Millionaires from Mass. join call to raise their tax rates 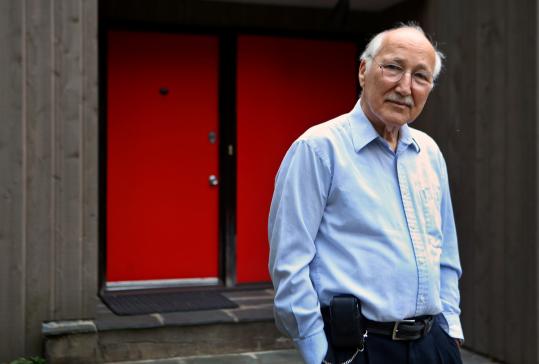 “This country has been good to me,’’ Philippe Villers said. (Michele McDonald for the Boston Globe)
By Callum Borchers Globe Correspondent / April 16, 2012
Text size – +

Philippe Villers was a little boy in 1940, when his family escaped from Paris only hours before the Nazi invasion and immigrated to the United States. From the harrowing flight of a wartime refugee, Villers went on to earn degrees from Harvard and MIT and to cofound Computervision, a former Fortune 500 company that made him rich.

As part of his effort to give back, Villers has made an unusual request to the federal government: Raise my taxes, please.

Villers is one of a handful of Massachusetts members of a national organization called Patriotic Millionaires for Fiscal Strength, which supports a 30 percent effective tax rate on million-dollar annual earners under the “Buffett Rule.’’ The Senate will hold a procedural vote on the proposal Monday.

The US tax code’s top income tax rate is 35 percent but imposes only a 15 percent levy on capital gains on investments, where many affluent Americans earn much of their money. Billionaire Warren Buffett, for whom the rule is named, has complained publicly that he pays an effective tax rate of just 17.4 percent, while his secretary pays 35.8 percent.

Senator Scott Brown has said he opposes the Buffett Rule and is expected to vote against it. The bill is not expected to garner enough votes to prevent a Republican filibuster.

President Obama and presumptive Republican presidential nominee Mitt Romney have taken opposing stances on the measure. Obama last week said the Buffett Rule is a matter of “basic fairness,’’ while Romney characterized it as an effort to “find the very most successful in our country and say they’re bad guys.’’

Villers and his fellow Patriotic Millionaires say they do not feel cast as villains.

“Not at all,’’ said Arnold Hiatt, the former chief executive of Stride Rite. “The bad guys are the ones who don’t want to share their marbles. They must have had trouble as children.’’

Hiatt said he remembers paying a 70 percent tax above a certain income threshold in the 1970s and that he was “delighted to pay that.’’

“It’s not all about income,’’ Hiatt said. “That’s not what this democracy was built on. I always thought it was built on fairness.’’

“Does anyone think that raising taxes is going to create more jobs?’’ he said last Wednesday at a rally in Warwick, R.I. “It’s time to recognize that the success of some makes us a more prosperous nation.’’

But Paul Egerman, who made his millions as founder of the digital medical transcription company eScription, argues that individual windfall seldom assists others. He estimates that tax cuts under President George W. Bush have saved him roughly $10 million over the last decade and asserts the money has helped no one but himself.

“It’s not like I took the tax cuts and went out and hired people,’’ Egerman said.

“When we created jobs at Stride Rite, it wasn’t because I earned more money,’’ he added. “It doesn’t trickle down, unless you’re talking about private jets and Rolls-Royces for executives.’’

The Joint Committee on Taxation estimates the Buffett Rule would generate $47 billion over the next decade, money the Obama campaign calls a “key step to reduce the deficit.’’ But with the Congressional Budget Office forecasting a 10-year deficit increase of $6.4 trillion under the president’s spending plan, Republicans argue Buffett Rule revenue would be negligible.

In a speech last week, Obama conceded the Buffett Rule “won’t do enough to close the deficit.’’

“But the notion that it doesn’t solve the entire problem doesn’t mean that we shouldn’t do it at all,’’ he said. “There are enough excuses for inaction in Washington. We certainly don’t need more excuses.’’

As he stated his case Wednesday at the Eisenhower Executive Office Building, Obama was flanked by a small group from Patriotic Millionaires, along with aides. More sat in the audience, including Brookline resident Robert S. Bowditch, founder of the property management company MB Management.

Bowditch said he was one of about three dozen group members who traveled to Washington to hear the president and to exchange ideas with Obama administration officials. The millionaires, Bowditch said, don’t agree with the administration, or with each other, on every subject.

“We’re not a group with a single ideology or outlook on everything, but we’re united on this issue of tax policy,’’ said Bowditch, who added that his effective tax rate is just 15 percent, while his assistant’s is 29 percent.

Bowditch, Egerman, Hiatt, and Villers are Democratic donors, though on varying scales. During the current election cycle, Egerman has contributed more than $400,000 to Democrats and liberal causes. Hiatt has given $80,400; Villers $54,800. Bowditch’s only gift has been $2,500 to Senate candidate Elizabeth Warren, who is challenging Brown.

Bowditch said he is concerned about the rising cost of higher education, which is “making it more and more difficult for even middle-class families to afford college.’’ He recalled paying his way through law school in the 1960s, when his household’s sources of income were his wife’s job at a pizza parlor and his weekend gigs in a rock band.

“It’s hard to imagine being able to do that today,’’ Bowditch said.

Egerman likened paying higher taxes to a long-term investment in the country, saying people who don’t need more money have a duty to improve the lives of people who do. “It’s incumbent upon people like me, who’ve been successful, to pay it forward so the next kid has the same opportunity I had,’’ Egerman said.

Bowditch said the Buffett Rule could help millionaires, too, arguing that “if you want a good country, you have to pay for it.’’

“I don’t want to be a rich guy in a second-rate country,’’ he said.

And Villers, now devoting much of his time to Families USA, the nonprofit health care advocacy group he and his wife, Kate, founded in 1982, said the Buffett Rule is neither a catch-all solution nor a merely symbolic gesture.

“It’s a first step in reversing the trend of increasing the wealth of the top 1 percent and decreasing wealth for the rest of America,’’ Villers said.