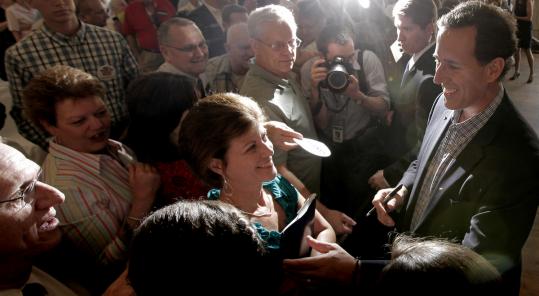 CHICAGO - In the final hours before a primary in this delegate-rich state, Mitt Romney said his economic background made him uniquely qualified for the presidency while Rick Santorum, hoping for another campaign-altering victory, resurrected charges that Romney’s business experience only made him beholden to Wall Street financiers.

Santorum, down in the polls and facing a barrage of negative ads on television across Illinois, sharpened his attacks on Romney on Monday as Republicans continue to grind out a lengthy nominating process that is exposing some of the divisions within the party.

“I heard Governor Romney here called me an economic lightweight because I wasn’t a Wall Street financier like he was,’’ Santorum told several hundred supporters in Rockford, Ill. “Do you think that’s the experience we need? Someone who’s going to take and look after, as he did, his friends on Wall Street and bail them out at the expense of Main Street America?’’

The voting in Illinois on Tuesday will allow Santorum to again snatch away an expected Romney victory, or allow Romney to continue building momentum and making the case that Republicans should line up behind him.

Romney appears increasingly confident and, with polls showing him in the lead, he has rarely mentioned Santorum in recent days and has focused almost solely on trying to unite Republicans around their desire to vote President Obama out of office.

“We need to send a message that it’s time to coalesce,’’ Ann Romney told voters in a northern suburb of Chicago on Sunday night. “It’s time to get behind one candidate and get the job done so we can move on to the next challenge, bringing us one step closer to defeating Barack Obama.’’

As the candidates spread across the state on Monday, their divergent messages put into sharp relief the different focal points of each campaign, and which issues they think will guide the general election in the fall.

Romney went to the University of Chicago, a bastion of conservative economic thought, and delivered a sharply worded speech on why he believes reelecting Obama will put the country in an economic danger zone. Santorum, before visiting the birthplace of President Reagan, continued to make the case that health care would be the driving force against Obama.

Standing in front of a statue of Reagan in Dixon, the late president’s childhood home, Santorum said Romney was in no position to take on Obama over the federal health care law because it was modeled after Romney’s signature health care law in Massachusetts.

“There’s one candidate in this race who could never make this race about freedom,’’ Santorum said. “Because he simply abandoned freedom when he was governor of Massachusetts and he abandoned it when he promoted Obamacare in 2009.’’

Later, Santorum downplayed the economic concerns that Romney has made the central theme of his campaign.

“I don’t care what the unemployment rate’s going to be,’’ Santorum said. “Doesn’t matter to me. My campaign doesn’t hinge on unemployment rates and growth rates. It’s something more foundational that’s going on.’’

Romney’s campaign almost immediately tried to seize on the comments as out of touch. “He Said WHAT?!’’ Romney press secretary Andrea Saul said in an e-mail to reporters.

There are 54 delegates at stake in Tuesday’s elections in Illinois. Santorum did not meet some of the election requirements, so the maximum number of delegates he can win is 44.

Another 15 delegates will be awarded at the state convention in June and are not contingent on the primary results.

Romney continues to build a large lead in the number of delegates, hoping to get the 1,144 necessary to clinch the nomination.

On Sunday, Romney won all 20 of Puerto Rico’s delegates, bringing his total to 521, according to an Associated Press tally. Santorum has 253 delegates, while Newt Gingrich has 136 and Ron Paul has 50. Gingrich and Paul have largely avoided campaigning in Illinois this week, choosing to focus on other contests.

But Santorum seems to be conceding that he won’t be able to win 1,144 delegates himself, and instead is focused on stopping Romney from winning outright. Santorum on Monday said possibilities are increasing for a brokered convention, where no one would have the delegates needed before the convention starts in late August. Party officials worry that such a scenario would cause deep divisions with the party just two months before the general election.

Romney, after starting his day at a diner in Springfield that serves oversized pancakes, delivered an economic address in a wood-paneled auditorium at the University of Chicago. He never mentioned Santorum, and appeared intent on transitioning to a general election contest.

“The Obama administration’s assault on our economic freedom is the principal reason why the recovery has been so tepid,’’ Romney said. “If we don’t change course now, the assault on freedom could damage our economy and the well-being of American families for decades to come.’’

Over the course of his 19-minute speech, Romney used the words “free’’ or “freedom’’ 41 times. The speech did not include any new policy proposals, but it marked a sharpening of his rhetoric and displayed a renewed attempt at criticizing Obama over an economy that is showing signs of improving.

But Romney argues that it should be improving faster than it is, and sought to argue that Obama’s policies are putting a stranglehold on growth.

“Our freedom is never safe - because unelected, unaccountable regulators are always on the prowl,’’ Romney said, speaking just steps from Obama’s house and the campus where he used to deliver lectures on constitutional law. “And under President Obama, they are multiplying like proverbial rabbits.’’

Romney also said that, under an Obama administration, innovators like Thomas Edison, the Wright Brothers, Bill Gates, or Steve Jobs may have never been able to execute their ideas.

“A regulator would have shut down the Wright Brothers for their ‘dust pollution,’ ’’ Romney said. “And the government would have banned Thomas Edison’s light bulb. Oh yeah, they just did.’’

After the address, Romney took three questions, including one that hit upon his lack of appeal among young voters.

“I joke, and I don’t mean to be flip with this, because I actually see truth in it,’’ he said. “I don’t see how a young American can vote for, well, can vote for a Democrat. I apologize for being so offensive in saying that while I catch your attention.’’