Accuses him of push for a US mandate 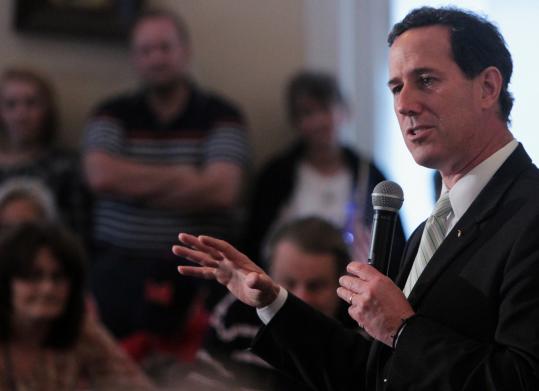 Rick Santorum launched a fresh attack Sunday on Mitt Romney, accusing him of not telling the truth about his support for a federal health insurance mandate based on Massachusetts law.

“Governor Romney actually advocated for the Massachusetts model that President Obama adopted with mandates, and then went out on the campaign trail and repeatedly didn’t tell the truth,’’ the former Pennsylvania senator said on NBC’s “Meet the Press.’’ “He went out and misled the voters that somehow or other he was not for mandates on a federal level, when in fact he was.’’

Santorum said he was not calling Romney a liar but, “I’m saying in this case he didn’t say what was the truth.’’

Romney, the former governor of Massachusetts, maintained Sunday that he never supported a federal mandate, but rather state-by-state solutions for health care.

The exchange follows publicity about comments Romney made in 2009 on health care. Among them is a July 2009 opinion piece in USA Today unearthed by the news site BuzzFeed. In it, Romney held Massachusetts up as a model and defended the state’s way of paying for a mandate that every resident have health insurance, ensuring the reform is not cost-prohibitive.

“Using tax penalties, as we did, or tax credits, as others have proposed, encourages ‘free riders’ to take responsibility for themselves rather than pass their medical costs on to others,’’ Romney wrote. Romney criticized Obama’s approach to health care and said, “There’s a better way. And the lessons we learned in Massachusetts could help Washington find it.’’

Romney spokeswoman Andrea Saul on Sunday rejected Santorum’s characterization of Romney’s 2009 comments. “Rick Santorum has a habit of making distortions, exaggerations, and falsehoods about Mitt Romney’s record. Governor Romney has never advocated for a federal individual mandate. He believes in the 10th Amendment and, as a result, has always said that states should be free to come up with their own health care reforms.’’

The renewed focus on Romney’s health care overhaul - and his integrity - came after Santorum and Romney traded victories in the Republican presidential race, both on Super Tuesday and over the weekend.

While Romney is ahead in the delegate count, Santorum is hoping to hurt Romney’s momentum as the race heads to Alabama and Mississippi, which vote Tuesday.

“First, he supported a mandated form of health care even at the state level,’’ Lesperance said. “Second, while he says he’s a constitutional conservative, there’s some doubt as to whether he really is.’’

Lesperance said the argument that Romney’s health care overhaul was the basis for Obama’s national plan could have particular resonance in the South, where there is strong hostility to federally mandated health care.

Governor Rick Perry of Texas first raised the issue when, as a GOP presidential candidate, he attacked Romney for deleting a line between the first and second versions of his book that implied Romney saw the Massachusetts reform as a national model. The later version of Romney’s book omitted the line, “We can accomplish the same thing for everyone in the country.’’

Perry’s attack was not entirely accurate since Romney was not talking about a mandate, but about ensuring everyone can get portable, affordable health insurance. The book also proposed a state-by-state rather than a national approach to health care.

In the USA Today op-ed unearthed by BuzzFeed, Romney held Massachusetts up as a model for covering the uninsured without resorting to government insurance.

BuzzFeed’s Andrew Kaczynski also found a January 2009 speech Romney gave to the House Republican Conference in which he proposed creating a plan for providing Americans with health insurance “based on market dynamics, free choice, and personal responsibility.’’ “I think what we did in Massachusetts is a good model to start from,’’ Romney said.

Romney also made similar comments about viewing Massachusetts as a model for a national plan in several TV interviews from 2009 discovered by BuzzFeed.

On “Meet the Press,’’ he said: “We have a model that worked,’’ noting that Massachusetts insured residents without a government insurance plan.

On the campaign trail, Romney has said repeatedly that he stands by the Massachusetts health care overhaul, but opposes Obama’s national overhaul. Romney made the same point in numerous interviews in 2007, when he said states should be “laboratories of democracy’’ that can fashion their own plans.

Santorum, in his Sunday appearance on “Meet the Press,’’ argued that Romney and Obama “are in exactly the same place on health care.’’ Romney “has repeatedly had big government solutions and then gone out and told the public bald-faced he didn’t do the things he did,’’ Santorum said.

Santorum said Obama could say to Romney, “Why do you say you want to repeal a program that’s identical to the program you put in place in Massachusetts and you advocated for me to do?’’

Santorum made similar points on the campaign trail.

But Santorum also previously supported some form of individual mandate. In 1992, he proposed a plan that would allow Americans to put money into individual medical savings accounts. Anyone who opted for the accounts would have been required to buy high-deductible, catastrophic health insurance.

During the 1994 Republican Senate primary, a Pennsylvania newspaper, The Morning Call, reported that Santorum, in response to a questionnaire, said that rather than having businesses provide health care for employees, as the Clinton administration plan had proposed, Santorum would require individuals to purchase insurance.

Later in 1994, the Reading Eagle reported in a story uncovered by BuzzFeed, that Santorum proposed mandating that employers offer their employees a chance to buy health insurance through a group insurance plan.