Democratic darling has also been critic 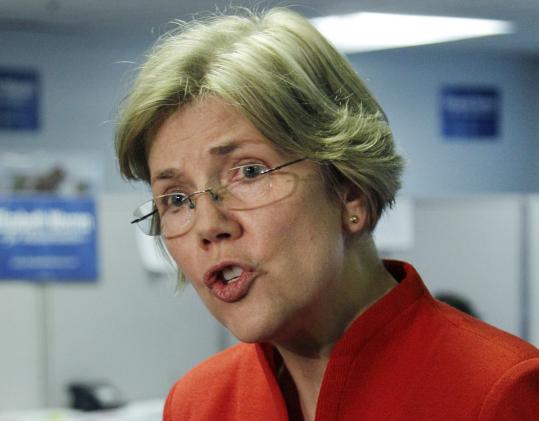 Elizabeth Warren’s campaign for US Senate has galvanized the Democratic base on the national level, but she has not always been cozy with the party’s top leaders.

In her best-selling book, she charged that Senator Hillary Clinton abandoned her principles and supported a bankruptcy bill in exchange for campaign contributions. Warren accused Joe Biden, also a senator at the time, of selling out women. And she chided Patty Murray - the Washington senator who later helped recruit her into the race and is now leading the national effort to elect her - for wanting to shame bankrupt families.

The shots against the Democratic titans, written with her daughter Amelia Warren Tyagi in the 2003 book “The Two Income Trap,’’ provide insight into how the Harvard law professor interacted with Capitol Hill power brokers during a period when her profile as a national consumer advocate was taking off. She would eventually return to Washington, first in an oversight role in Congress and then as an adviser to President Obama.

The comments reveal a blunt and sometimes combative side of Warren that has brought her both supporters and detractors.

Her criticism of top Democrats takes on particular significance now, as Warren’s campaign against US Senator Scott Brown, a Republican, emerges as a force in Democratic politics. It could help Warren in dispelling the notion that she is a creature of the party, unwilling to act independently. But it could also feed the image being painted by Brown that she is a “rock thrower.’’

Warren, in an interview this week, made no apologies for her depictions, which she said were all true.

“I called it the way I see it,’’ she said. “I always have. I do that regardless of political party, regardless of how powerful someone is.’’

She said she has since had good relationships with all three top Democrats, but the specific passages in her book have never come up in conversations with them, and it is not clear that the subjects are even aware of them. Warren said she was not trying to attack the politicians personally, but using their actions to make larger points about the political process that she had come to understand.

In the same sections of the book, Warren also acts as a bridge builder. She advocates for new political alliances among religious conservatives, women’s groups, and liberals, arguing they have a common interest in protecting families from economic hardship.

In the late 1990s and 2000s, Warren, a bankruptcy expert at Harvard Law School, was fighting against a bill that would make it more difficult for consumers to wipe out debts by filing for bankruptcy.The bill was strongly supported by the credit card and banking industry. Proponents argued that bankruptcy laws were being abused and that it was too easy for debtors to shirk their responsibility. It became law in 2005.

Warrenargued that the legislation would give too much leverage to credit card companies to demand money from those who faced job losses, medical debt, or divorce. She said it would make the poor more vulnerable to predatory lenders and was particularly bad for single mothers.

Warren, in her book, went into detail about her interaction on the subject with Hillary Clinton, which began in 1998, when her husband was president. In Boston for a fund-raiser, Clinton summoned Warren to meet with her to discuss an op-ed article Warren wrote in The New York Times about the bill.

Her description of the women’s first encounter is complimentary.

“I have taught bankruptcy law to thousands of students - some of them among the brightest in the country - but I never saw one like Mrs. Clinton,’’ Warren wrote in her book. “Impatient, lightning quick, and interested in all the nuances.’’

Clinton, after Warren’s briefing, referred to the bankruptcy crackdown as “that awful bill,’’ and immediately helped Warren defeat it, persuading her husband to veto it in 2000, according to the book.

But a year later, when Hillary Clinton was in the Senate and another version of the bankruptcy bill was filed, things changed. She “bowed to big business’’ and supported the bill, Warren wrote, attributing the change to $140,000 in campaign contributions from the banking industry.

“As New York’s newest senator . . . it seems that Hillary Clinton could not afford such a principled position,’’ Warren wrote.

Clinton’s media office at the State Department did not respond to three requests for comment from the Globe.

Warren also took Biden to task for acting as the bill’s leading Democratic supporter, writing that women’s groups should not give him a pass on the issue just because of his work against domestic violence.

“Senators like Joe Biden should not be allowed to sell out women in the morning and be heralded as their friend in the evening,’’ she wrote.

Biden’s office, too, declined to comment for this story.

Warren offered a briefer critique of Murray, using her as an example of politicians’ dismissive attitude toward bankrupt families whom Warren interviewed as part of her research.

She points to a quotation from Murray, in which the senator from Washington State asserts that the nation needed to “recapture the stigma associated with a bankruptcy filing.’’

Warren’s retort: “The idea that they do not feel bad enough about their bankruptcy filings would have come as a shock to most of the families who filed.’’

Murray now chairs the Democratic Senatorial Campaign Committee, which has made Warren’s campaign one of the highest-priority races in the country. Murray’s spokesman at the DSCC, Matt Canter, said, “Senator Murray is strongly supportive of Elizabeth Warren’s candidacy.’’

Warren said she has since worked with all three Democrats in somecapacity: Murray helped urge her to run. Clinton ultimately opposed the 2005 version of the bankruptcy bill, and her Senate office worked with Warren to push for a national consumer protection agency.

And she has had a few notable interactions with Biden.

In a 2005 Senate committee hearing, two years after the book was published, Biden quizzed Warren for several minutes about the bankruptcy bill, an exchange that ended with laughter.

But Biden clearly disagreed with Warren on the substance: “You make a very compelling and mildly demagogic argument,’’ he told her at one point.

Warren said she again ran into Biden about a year ago when she was working in the Obama White House to set up a Consumer Financial Protection Bureau.

Biden was walking through the hall, showing a group of friends around. He immediately flashed back to the epic battles, but by then the mood was lighter.