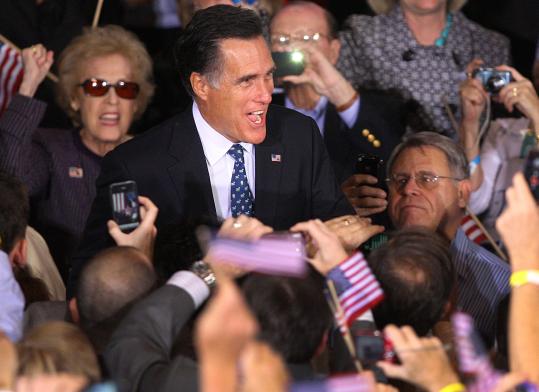 Hedge fund moguls and other high-flying capitalists dominate the top of a recently unveiled list of donors to a group supporting Mitt Romney’s bid for the presidency, a reflection of his years as head of Bain Capital as well as his probusiness approach to improving the economy.

Restore Our Future, a super PAC supporting Romney, reported late Tuesday night that it raised $30.1 million in 2011, with 10 donations of at least $1 million. But the largesse comes with potential pitfalls - donors with histories of contributing to causes ranging from promoting gay marriage to backing a group attacking 2004 Democratic presidential nominee John F. Kerry’s military record.

The political action committee has been credited with playing a major role in giving Romney an edge in the presidential race, bankrolling attack ads against former House speaker Newt Gingrich while allowing Romney to maintain some distance from the attacks because such groups cannot coordinate activities with candidates. A broadside of ads in Iowa and Florida preceded a fall in the polls for Gingrich in each crucial state.

The super PAC has spent around $17 million so far. By law, super PACs can collect and spend unlimited donations but must reveal their donors. The disclosure this week was the first required since last summer.

One of the most prominent of its donors was Paul Singer, founder of the hedge fund Elliott Management Corp. and chairman of the Manhattan Institute for Policy Research. He gave $1 million to the PAC. Singer, who is a fund-raiser and adviser to Romney, has given hundreds of thousands of dollars over the years to the National Republican Senatorial Committee and contributed to numerous Republican politicians.

He is also known for supporting gay marriage. Singer’s son is gay, and Singer was one of three wealthy Republicans who helped bankroll New York’s campaign to legalize gay marriage, donating $425,000 and marshaling other Republican donors, the New York Times reported.

Romney opposes gay marriage, yet his support early in his career for gay rights has been used by his rivals to show he has been inconsistent on the issue.

Another $1 million donor is Robert Mercer, a hedge fund manager and co-chief executive of Renaissance Technologies Corp. Politico reported last year that Mercer funded an ad campaign opposing an Islamic center that would be built near Ground Zero in Manhattan, through a $1 million donation to the New York State Conservative Party.

Among the top donors not tied to the financial industry, Bob Perry, chief executive of Perry Homes in Houston, gave Restore Our Future $1 million. Perry, who made millions in the home building industry, is a major donor to conservative politicians in Texas and elsewhere, including to President George W. Bush. He is most well-known as the primary backer of Swift Boat Veterans and POWs for Truth, a group established to attack the Vietnam military record of Kerry. Perry gave $4.35 million to the controversial group.

He has also given over $8 million to American Crossroads, a group run by conservative strategist Karl Rove. Perry was also a major donor to former presidential candidate Rick Perry.

Some donations were likely the result of Romney’s personal connections. Officials at Bain Capital, where Romney was chief executive in the 1990s, donated more than $3 million. Brothers J.W. and Richard Marriott, who run the Marriott hotel chain, each donated $500,000. The Marriotts are longtime friends of the Romneys.

Jenzabar, a technology company run by the chairman of the Massachusetts Republican Party, Robert Maginn, gave $250,000 to the super PAC. Maginn worked with Romney at Bain and was finance co-chairman of Romney’s 2008 presidential campaign.

A quartet of four Melaleuca companies, which sell home and personal care items, gave $1 million. Company president Frank VanderSloot is a national finance co-chairman of the Romney campaign and also raised money for Romney in 2008.

A handful of the donations are harder to identify. This summer, former Bain official Edward Conard created controversy when it was revealed he had donated $1 million to the super PAC anonymously under the company name W Spann LLC. Two other $1 million donations disclosed this summer were from Eli Publishing and F8 LLC, Utah companies with the same address and no apparent business dealings.

But most donations are clearly tracked to executives and investors. Employees of gave $480,000. John Paulson, the hedge fund investor who made billions betting against subprime mortgages, gave $1 million. Energy magnate William Koch and his company Oxbow Carbon, a Florida-based gas and coal company, gave a total of $1 million. Koch, who has a home on Cape Cod, has been active in opposing the proposed Cape Wind energy project there.

The candidates’ own campaigns, despite being more constrained by campaign finance limits, raised significant amounts last year as well: $56.1 million for Romney and $12.6 million for Gingrich.

The full list of donors can be found here.

Breaking down the super PACs