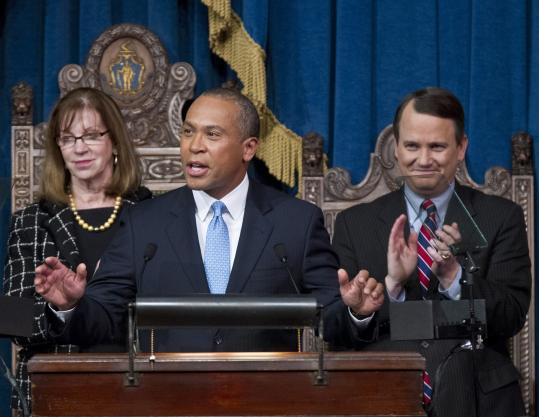 Patrick highlighted the connection between the often overlooked schools and the unemployment problem. Encouraging more cooperation between schools and local employers, he said, would help the state’s 240,000 unemployed get the skills they need to fill an estimated 120,000 current job openings, many of which require specific training.

“We have a skills gap,’’ Patrick told the packed House chamber at the State House. “We can do something about that. We can help people get back to work. And our community colleges should be at the very center of it.’’

The 30-minute speech offered a narrow focus and lacked the lengthy list of new initiatives that often characterize such addresses. Beyond the community college proposal, Patrick introduced just two other initiatives: a health insurance payment overhaul and a criminal sentencing package, both of which he has previously supported.

Unlike last year’s speech, when excitement from Patrick’s reelection was still spilling over, the governor delivered this address, his sixth, at a moment when he has been overshadowed politically.

His predecessor, Mitt Romney, is locked in a riveting Republican presidential primary contest. Patrick’s state party is focused on helping Democrat Elizabeth Warren challenge US Senator Scott Brown, a Republican, in what may be the nation’s most gripping Senate race.

Even Patrick’s lieutenant governor, Timothy P. Murray, has stolen the spotlight with growing interest in his mysterious high-speed rollover crash and in his ties with a former Chelsea Housing Authority chairman Michael E. McLaughlin, who is under federal investigation. Murray received a prolonged ovation from the friendly crowd when he was introduced.

Despite the budgetary challenges faced by his administration, Patrick cited the state’s high credit rating, its vast improvement in job creation, and his ability to curb public employee benefits without the turmoil that erupted in Wisconsin and other areas of the country.

The governor also touted the state’s success in curbing health insurance rate increases, from an average of 16.3 percent two years ago to 2.3 percent this year.

Patrick again pushed to dramatically change the medical payment system, renewing an unsuccessful plea he made last year to end the fee-for-service model with a so-called global payment system that rewards doctors for coordinating care.

And the governor renewed his support for a modified version of the controversial “three-strikes’’ crime bill that would lengthen sentences for repeat violent offenders, requiring life sentences without parole for those whose third felony is murder or a “similarly heinous act of violence.’’

“We have moved, at massive public expense, from treatment for drug offenders to indiscriminate prison sentences and gained nothing in public safety,’’ he said. “Many come out more dangerous than when they come in.’’

Throughout last night’s speech, the governor drew applause from fellow Democrats in the state’s political establishment, who greeted his initiatives warmly.

The future of the state’s community college system has faced renewed questions since November, when a pair of reports described it as disjointed and inadequate in its preparation of students for technical careers.

“We need that kind of sharper mission across the Commonwealth, so that community colleges become a fully integrated part of the state’s workforce development plan,’’ Patrick said. “We can’t do that if 15 different campuses have 15 different strategies.’’

The governor’s proposal will let a central board dole out funding to individual colleges, taking into account enrollment and several performance measures. The new plan is also intended to make it easier for students to transfer credits among colleges, attacking a problem that has drawn frequent complaints. To help with the transition, Patrick is proposing a $10 million bump in the community college system’s budget for the coming year.

Community colleges are often overlooked in a state dominated by elite universities including Harvard and the Massachusetts Institute of Technology, but they tend to enroll vast numbers of students and play a crucial role in training workers.

“We’re just trying to digest what we’ve heard,’’ he said.

It was not the first time a Massachusetts governor has tried to centralize the community college system. The Romney administration put forth its own proposals, which foundered in the Legislature.

But Paul Grogan, chief executive of the Boston Foundation and author of an influential report on community colleges released two months ago, said this time could be different.

“There’s an accountability movement in education now, and also obviously there’s the tremendous problem created by the economy,’’ he said. “This is an opportunity for the schools to be something fundamentally more important than they have been.’’

Reaction to Patrick’s address last night ran along party lines, drawing praise from Democratic leaders in the House and Senate who said they share Patrick’s agenda. The Legislature’s small Republican minority said the governor’s community college plan did not do enough to address the state’s larger economic problems.

“For what is the number one issue for the public out there, jobs and the economy, I thought it was extremely light in the speech,’’ said Representative Bradley H. Jones Jr., the Republican leader from North Reading.

Mary Carmichael of the Globe staff contributed to this report. Noah Bierman can be reached at nbierman@globe.com. Follow him on Twitter @noahbierman.