Many still struggle to pick a candidate 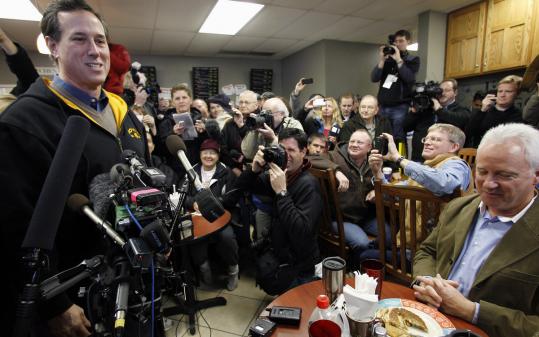 POLK CITY, Iowa - They are the hand-wringing holdouts of Iowa, unpersuaded by the onslaught of advertisements, unmoved by the patriotic political rhetoric, the debates, the endorsements, the folksy aphorisms, the family testimonials.

Undecided voters - who make up nearly half of all caucusgoers, according to recent polls - could determine the winner of today’s contest and help shape the contours of the election.

If they could just make up their minds . . .

More so than in any election in recent memory, Iowans are in flux about whom to support for the Republican presidential nomination. Even yesterday, in the final, frigid hours of the race, as the candidates charged into diners and banquet halls, shaking hands and pleading for votes, Iowans were to a surprising degree unwilling to settle on a favorite.

Some complained that the candidates have too many flaws. Some were turned off by all the negative ads. Some said they liked all the candidates, but worried whether any one of them could beat President Obama.

No wonder the race has been so volatile. Many yesterday were still scrutinizing the field, talking to friends, and praying - hoping someone, anyone, would jump out as the clear choice.

“I like Rick Perry. Newt Gingrich has experience. But they’re all good, and they all have the bad, so it’s hard to tell,’’ said Cathy Hull, who owns On The Square, a small consignment and gift shop in Polk City, 30 minutes north of Des Moines.

The avalanche of negative ads has poked so many holes in the candidates it “makes it just so tough to decide,’’ she said.

For many, the process of winnowing the field has been painfully slow. Donald Todd, a 69-year-old airline pilot from Slater, said he has only definitively ruled out one candidate: the former Massachusetts governor, Mitt Romney.

“I have just a basic dislike for Romney,’’ said Todd, an Air Force veteran who served in Vietnam. “He’s just a power-hungry Eastern elitist.’’

“If I’m looking for somebody who can be the best debater for Obama and have the best chance of knocking Romney out of the race, I vote for Newt,’’ Todd said. “If I just go for straight convictions, I’d probably vote for Santorum. So it depends on whether you look at the strategy part or the ideology part.’’

Larry Cox, 59, a computer network engineer from Des Moines, said he was still torn among three candidates: Michele Bachmann, Perry, and Santorum. And yet, like many who have cast their eyes from one Republican to the next over the past six months, he has seen something to dislike in each one, making his choice all the more agonizing.

Polls show the race to be an excruciatingly close contest among Romney, Ron Paul, and a fast-closing Santorum. Gingrich, Perry, and Bachmann are battling in a second tier.

The contest also remains remarkably fluid: 41 percent of those surveyed in a Des Moines Register poll released Saturday night said they were leaning toward one candidate but could still be persuaded to support another.

Many voters said they were still wrestling with their decision because they are not taking it lightly, in a time of rampant unemployment and anxiety about the future.

After narrowing his choice to Romney or Paul, Goebel drove 90 minutes to hear Romney speak in a coffee shop in Atlantic on Sunday and then jammed into a ballroom at the Des Moines Marriott to hear from Paul yesterday.

Afterward, he said he was leaning toward Romney, as “a pragmatic businessman.’’ And yet he was still intrigued by Paul.

Santorum could take a swath of the late-deciding voters. Recent polls indicate Iowans may be moving his way, giving his campaign a palpable sense of momentum on the eve of the caucuses.

“I’m going for Rick Santorum, and most of my neighborhood seems to be changing, too,’’ said Jim Stasie, 68, a retired salesman from West Des Moines.

Why is that? Stasie said the former senator’s rising poll numbers made people look more closely at a candidate who has been vastly outspent by his rivals and, until recently, all but ignored by the news media.

“His showing in the poll last week made everyone look at him, and when they looked at him, they said, ‘Well, gee, this guy agrees with me on most everything,’ ’’ he said. “But it’s like he was hidden under a rock for a long time.’’

Of course, not everyone is convinced. Hull, the gift shop owner, said she will probably wait until the caucus tonight to make her decision. In her mind, she said, it is a wide open race. Anyone could win her vote. “I really don’t know,’’ she said. “Is that bad?’’

Tracy Jan and Matt Viser of the Globe staff contributed to this report. Michael Levenson can be reached at mlevenson@globe.com.