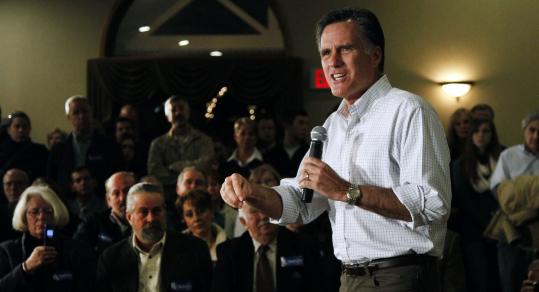 MANCHESTER, N.H. - Mitt Romney’s support appears to have leveled off in various early voting states, with voters seeming to look askance at the former Massachusetts governor as they bounce to the newest stars in the Republican firmament rather than flock to him.

Not so in New Hampshire.

Here in the Granite State, Romney has remained consistently at the top, with no one coming close to challenging him just more than two months before voters head to the polls. He has received the biggest endorsement (from former Governor John Sununu), made no major flubs, and polls put his support above 40 percent. It is one of the few states where he is drawing more than 25 percent.

New Hampshire has remained a firewall for his campaign, allowing him to downplay expectations in other early voting states such as Iowa and South Carolina. In a fluid race, it’s the closest thing that any candidate has to a lock on a single state.

New Hampshire Republicans are more prochoice than Republicans in other parts of the country. In recent polls, likely GOP primary voters are almost split evenly over whether a state law legalizing gay marriage should be repealed. Romney opposes abortion and gay marriage but less stridently than some of his foes. And while Romney’s Mormon faith may be a hindrance elsewhere, it probably won’t be in New Hampshire, the second-least religious state in the country, behind Vermont.

Romney continues to try to cultivate support in this state, and he returned for a town hall meeting last night at the Executive Court in Manchester. He fielded questions from a friendly crowd on immigration, health care, and the economy. He said he sympathized with some of those in the Occupy Wall Street movement, but also said the cause would be unnecessary if the economy were better.

Romney also said, “I don’t have a career in politics. This for me is not the next step in my political career.’’

Romney has distinct advantages in New Hampshire, in part because voters are familiar with him. He also owns a house on Lake Winnipesaukee and governed neighboring Massachusetts for four years. During this campaign, he has lavished attention on the state (last night marked his 15th New Hampshire town hall meeting of this campaign) and has focused squarely on the economy, which voters here care about, and far less on social issues, which they generally don’t.

“He’s well known, he’s spent a lot of time in New Hampshire,’’ said Ovide Lamontagne, who is running as a Republican for governor. But, he added, “I still believe that New Hampshire is a very fluid voting bloc. I’m actually surprised that a lot of people who are politically active haven’t made up their mind.’’

Indeed, Romney’s front-runner status could put him in a precarious position in a state whose voters enjoy defying expectations. Four years ago, they went for Hillary Clinton over the Iowa caucus winner, Barack Obama, and for John McCain over next-door neighbor Romney. A recent poll by WMUR-TV found that only 11 percent of likely Republican voters had definitely decided whom they would support.

But few of Romney’s rivals have actually challenged him here, or put themselves in a position to benefit if he falters. Michele Bachmann, after making several early trips to the state, has generally stayed away.

Newt Gingrich has made only sporadic trips here, and former senator Rick Santorum of Pennsylvania has staked much of his candidacy on Iowa. Jon Huntsman has placed renewed emphasis on New Hampshire, but has yet to gain traction. Herman Cain has surged to second place here but is still building his campaign organization and has made infrequent campaign visits.

The candidate, whose early burst of support has waned, a drop-off commonly attributed to lackluster debate performances, would not say whether he would commit to more debates. “There’s going to be a lot of debates,’’ he said, “and, shoot, I may get to be a good debater before all this is over with.’’

But Perry also continued to question Romney’s standing as a tried-and-true Republican.

“Consistency, I think, is very important,’’ Perry said in an interview with a local radio station. “You may not agree with me on everything, but you don’t have to wake up in the morning and wonder, ‘Is Rick Perry going to be the same guy in two years that he was two years ago?’ The answer to that is, ‘Yup. He will be.’ ’’

“Like it or not, the governor has been on opposite sides of a lot of issues,’’ he added. “He was for banning handguns, and now he’s Mr. Second Amendment. He was the father of Obamacare . . . Who are we really going to trust?’’

So far, at least, voters aren’t trusting Perry. He has dropped to 4 percent in a recent CNN New Hampshire poll that put Romney at 40 percent.

“[Romney] has run in all 10 counties, he has run aggressively, he has embraced the quintessential New Hampshire town hall meeting,’’ said Jim Merrill, who is running Romney’s operation in New Hampshire. But, he added, “I worry every day about earning support and earning votes. He campaigns hard, he works hard, and he knows he can’t take it for granted. You’ve got to run like you’re three votes down with three minutes to go.’’