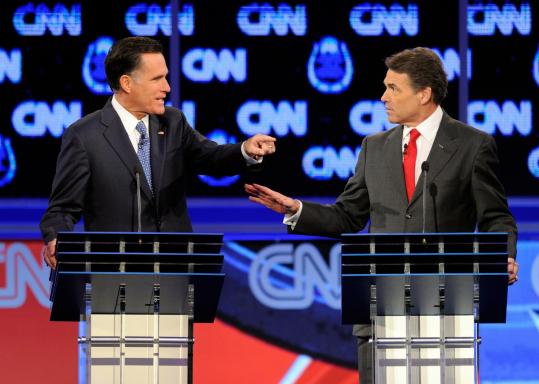 WASHINGTON - The fiercest exchange from the GOP’s raucous debate in Las Vegas had nothing to do with the dominant issue of the presidential campaign, the economy, but instead spewed forth from a surprisingly potent and defining concern for the candidates: illegal immigration.

Governor Rick Perry of Texas pointedly challenged Mitt Romney on the issue Tuesday, calling it the “height of hypocrisy’’ that the former Massachusetts governor takes a hard-line stance given that illegal immigrants had landscaped the lawn at his Belmont home just a few years ago. Romney retorted that Perry was playing with facts before battering his rival for supporting “magnets’’ that attract such immigrants.

It was a striking exchange of barbs and pointed fingers.

Yet talk about electrified border fences and personal shots at supposed weak-kneed governors on the issue of illegal immigrants have torn some in the GOP. Harsh tactics and words may play well with elements of the crucial Tea Party base, but some Republicans argue the corrosive nature will cost the party in the general election, when the Hispanic vote could be pivotal.

Political analysts and pollsters contend such wringing of hands misses a critical point: The economy and education dwarf immigration as concerns for Hispanic voters.

With their community battered by an unemployment rate of 11.3 percent - more than two percentage points above the national average - moderate Hispanics could be particularly receptive to Romney and his laserlike focus on jobs.

“For Hispanic voters in this election, there’s no question the economy will trump the immigration issue,’’ said Nathan Gonzales, deputy editor of the nonpartisan Rothenberg Political Report.

Poll numbers back up that contention. According to the Pew Hispanic Center’s 2010 survey, education and jobs were the dominant issues among Hispanic-American voters, followed by health care and the budget deficit. Immigration ranked fifth.

Romney has tried to juggle his condemnations of illegal immigration with a cajoling of Hispanic voters on the jobs front. Targeting the large swing state of Florida, his campaign released a Spanish-language online video ad that highlighted the state’s 10.7 percent unemployment rate and slammed President Obama’s economic record. “Obama isn’t working,’’ the ad stated.

But in town hall meetings and stump speeches around the country, Romney continues to make illegal immigration a significant part of his campaign. He calls for the construction of a border fence with Mexico, a crackdown on employers of illegal immigrants, and English immersion in schools serving a high percentage of minorities.

In particular, he has used the issue as a sledgehammer against Perry, relentlessly attacking him for supporting in-state tuition discounts for illegal immigrants. In doing so, Romney is trying to exploit what some activists in the Tea Party movement - Perry’s perceived base - consider a vulnerability for the Texas governor.

Some Republicans believe the tactic could backfire - not just on the candidate, but on the GOP’s future.

“Mitt Romney is charting the course and driving the debate on this, and he’s getting the Republican Party out on thinner and thinner ice with Hispanics every time he opens his mouth on the issue,’’ said Ana Navarro, the Hispanic cochair of Jon Huntsman’s presidential campaign who served in the same role for John McCain’s 2008 team.

The GOP has long tried to combat its perceived image as the anti-immigration party, in an effort to chip away at Latino support for Democrats, especially as the country’s Hispanic population surged 43 percent over the last decade. George W. Bush was able to accomplish this by focusing on Latino outreach in 2004, when he won 43 percent of the Hispanic vote en route to reelection. But four years later, Latinos overwhelmingly supported Obama with 67 percent of the vote.

Pollsters point to a significant swing vote that accounts for these shifts, one whose allegiance centers on economic issues.

Next year, with the economy likely to be front and center, even Democrats believe a candidate who is tough on immigration can compete for this vote.

“You may not be able to capture a majority of the Hispanic vote with Mitt Romney’s position on illegal immigration,’’ said Democratic pollster Andrew Mellman. “But you can still capture a healthy portion - even something in the George Bush ballpark - and that portion could prove critical.’’

Especially critical will be such states as Florida, Colorado, and Nevada, all of which turned to Obama in the last election. The Hispanic voting-age populations have grown in all three states since 2008, and Republicans believe Obama’s standing with the Latino population has been compromised. The most recent Gallup poll pegged his approval rating among Hispanics at 49 percent, a major drop-off.

Obama’s reelection team remains confident that, no matter the Republican nominee, the decision for Hispanics is clear.

They “will choose between a president who kept 1.9 million Latinos out of poverty, increased their educational opportunities, and is fighting for comprehensive immigration reform and the DREAM Act, and a Republican field whose leading candidates oppose the DREAM Act and a path to citizenship, and would slash funding for education, Medicare, and Social Security,’’ said campaign spokeswoman Gabriela Domenzain.

The DREAM Act is a proposal that would allow children of illegal immigrants to pursue a pathway to US citizenship through college or military service.

For Romney, immigration is also a personal issue. He rarely mentions on the stump that his father, George, was born in Mexico while his parents were trying to build a Mormon colony, a fact that his rivals have declined to make an issue. Instead, Romney appears to see an opportunity to attract Latino voters on an economic level.

In a speech in early September to the Republican National Hispanic Assembly in Florida, Romney trumpeted his economic message while preserving his argument to “stop providing the incentives that promote illegal immigration.’’

“The people who came to America did not come for a handout, they came here for opportunity,’’ Romney told the crowd. “The president and his party are about handouts and the redistribution of wealth. That is not what brought people to these shores.’’

It’s temperate language like this that might prevent Hispanic displeasure from crowding out Romney’s economic message. Analysts agree that while Latinos have largely relegated immigration toward the bottom of their priorities list, a candidate’s tone on the issue can inflame the issue within the community. Businessman Herman Cain, for one, provoked the ire of some Hispanics when he joked that an electric fence on the Mexico border could curb illegal immigration.

“Even though he’s taking a hard line on the issue, stylistically Romney isn’t inflammatory,’’ Gonzales said.

This was true at the end of Tuesday night’s flurry.

“Let’s step back,’’ Romney said. “I think it’s important for Republicans on this stage to say something which hasn’t been said. And that is I think every single person here loves legal immigration. We respect people who come here legally.’’

Alex Katz can be reached at akatz@globe.com.