House districts may get shake-up

McGovern, Olver could face off Southeast may gain a seat 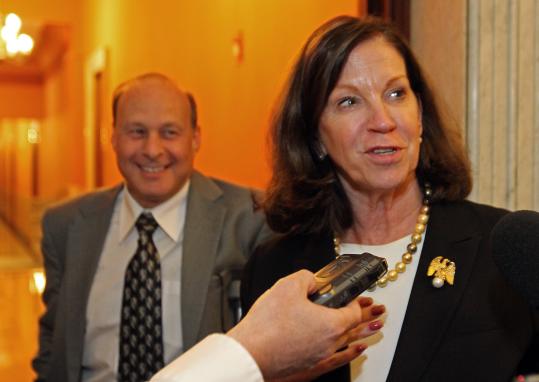 With the deadline fast approaching, Beacon Hill lawmakers are considering a major overhaul for Massachusetts’ tangled, gerrymandered congressional map, a new twist that could create political upheaval for the state’s 10 Democratic US representatives.

One scenario now under serious consideration would pair incumbents James P. McGovern, of Worcester, and John W. Olver, of Amherst, in the same district, forcing them to run against each other, according to Democrats informed of the latest proposals.

The legislative redistricting committee - required to reduce the number of congressional districts from 10 to nine because of the state’s anemic population growth - is also focusing on the creation of a Southeastern Massachusetts-based seat that would be centered around New Bedford, Fall River, and Taunton. Such a plan would acknowledge the area’s fast-paced growth and emerging regional identity.

That part of the state is now divided up among long, narrow districts, represented by congressmen who live north of the region. The district could include Cape Cod, which is represented by William R. Keating, of Quincy.

The decision to make a more compact district could force Barney Frank, of Newton, to decide whether he would run in a newly formed seat west of Boston or move to the South Coast, where is he generally very popular.

Frank’s awkwardly drawn district, with its roots in a 1982 redistricting plan, snakes from Brookline and Newton down to Fall River and into towns along Buzzards Bay.

Another crunch would probably occur on the South Shore and Norfolk County, where Stephen F. Lynch, of South Boston, and Keating would find themselves in the same district. They would be forced to run against each other unless Keating chooses to move to Cape Cod to run in the newly formed Southeastern district.

It is not clear at this point if all or merely one of the scenarios will prevail. Legislative leaders have cautioned that the situation is still fluid. But the very real potential for one or all of them to be part of the final proposal has rattled the state political establishment in recent days.

House and Senate leaders, who need to finish the congressional map by mid-November, insist no final decisions have been made. They must approve a new map for the 2012 elections before the Legislature adjourns in mid-November. The same lawmakers yesterday released a proposal for new state legislative districts.

Up until several days ago, those familiar with the process were convinced that the redistricting committee had been principally focused on either combining Lynch’s seat with Keating’s or merging Olver’s district with the other Western Massachusetts seat held by Richard E. Neal, of Springfield.

But lawmakers say the committee is trying to straighten out what have become convoluted congressional district lines drawn decades ago by Democrats in power for political reasons: to protect incumbents and keep the delegation free of Republicans.

Those interviewed for this article declined to be named because the process is not yet complete.

Some close to the redistricting efforts have speculated that Olver, who is 75 and whose wife is ill with cancer, will not seek another term after 20 years in Congress. His district runs from the New York border into a part of northern Middlesex County.

The Senate chairman of the Legislature’s redistricting committee, Amherst Democrat Stanley C. Rosenberg, a close friend and political ally of Olver’s, insisted yesterday that nothing has been finalized. He acknowledged that the committee has a “series of scenarios’’ and said reports of any specific plan would be “rumor and speculation.’’ He would not comment further.

But Rosenberg has also made clear to his colleagues and to the media that the state’s current congressional delegation is heavily represented by those from the Boston area and that he wants to change that dynamic.

Rosenberg must balance demands from his own constituents to keep two seats in Western Massachusetts with those from the Boston-based political establishment which feels that the region’s declining population should only entitle it to one congressman.

A move to put Olver and McGovern into one district would ease that task by maintaining Neal’s seat, thereby keeping two districts in the west, while eliminating the need for McGovern’s district to move east, cutting into those around Boston.

McGovern, who has a strong liberal voting record, would likely benefit from giving up the heavily conservative parts of his current district that now run from Worcester through parts of Fall River.

The latest plan would call for McGovern, who normally carries his home city of Worcester by large voting margins, to campaign for a seat that would include heavily progressive towns such as Amherst, Northampton, and those in the Pittsfield area, as well as smaller communities in Hampshire, Berkshire, and Franklin counties that also vote heavily Democratic.

The committee’s House cochairman, Representative Michael J. Moran, of Brighton, also insisted that “no official’’ map has been drawn. Asked about the McGovern and Olver merger, he said, “that is as likely a scenario as any other.’’