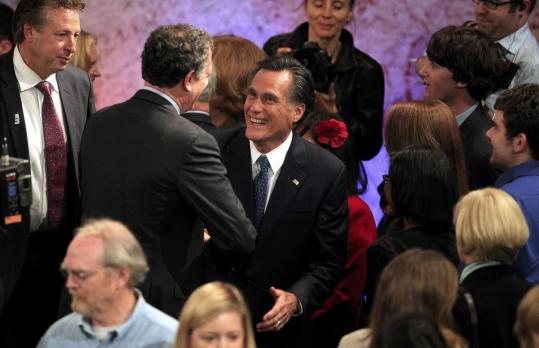 With a rush of new endorsements from party leaders, presidential candidate Mitt Romney is presenting himself as the sure-footed front-runner. He appears more polished in one appearance after another, reaping the benefits of his failed candidacy four years ago.

“What’s remarkable is how comfortable he is in the debate format,’’ said Donna Sytek, a former House speaker from Salem, N.H., who supports Romney. She sees a much more confident candidate than the one felled in 2008 after a fitful, error-marred campaign that marked him as a political shapeshifter.

Her assessment of the former Massachusetts governor as a stronger candidate, less prone to gaffes, is shared by many, including national pundits, though he still lacks the campaign-trail charisma of Rick Perry or the Tea Party movement appeal of several other GOP candidates.

The first nominating contest is expected to be fewer than 90 days away and Romney’s rounding into form may help his technocratic aura, even as some of the party’s more ideological activists remain suspicious or skeptical of his core beliefs, particularly on social issues.

Following a period of self-examination that began soon after the end of his 2008 candidacy, Romney has emerged as the most disciplined figure in a crowded, fractious GOP field. That may be his most valuable asset in a contest to find the most electable challenger to Obama.

Patrick Griffin, a New Hampshire-based political consultant who is unaligned in the presidential race, was impressed when he caught Romney for the first time in this cycle at a town hall meeting late last month at Saint Anselm College, where Griffin is a senior fellow at the New Hampshire Institute of Politics.

“He was very different from the candidate in the last campaign,’’ Griffin said. “I got the sense this was not the typical Mitt Romney of the past who wanted to please everybody in the room. He was focused on jobs and the economy and very comfortable in his own skin. It was the most crisp Romney performance I’ve ever seen.’’

Mike Dennehy, a New Hampshire Republican strategist who worked for John McCain’s presidential campaigns, said Romney as a candidate is much improved but still faces obstacles connecting with some voters.

“He doesn’t come across as that warm and fuzzy candidate that people can relate to,’’ said Dennehy, who is not aligned in the GOP race this cycle. And Romney will always experience resistance from some conservatives who are distrustful, Dennehy said, because of his changed positions on such issues as abortion rights and gay rights.

“Everyone wants Romney to be perfect,’’ said Mark McKinnon, a strategist who worked for George W. Bush but is not aligned in the current campaign. “But no candidates are perfect; they all have flaws. And, in fact, voters are suspicious of perfect. They want authentic.

“If Romney tried to act like Bill Clinton, turning himself inside out to connect with voters, it would come off as phony. The best approach is the Popeye strategy: ‘I yam what I yam.’ ’’

Four years ago, Romney’s campaign was preoccupied with introducing him to a national GOP electorate, gyrating often through news cycles, reacting seemingly to every new development, sometimes in panic mode and at times erratically. The candidate appeared preoccupied with casting himself as ideologically in sync on social issues with the party’s conservative base, which viewed him warily because so many of his positions were arrived at in the recent past.

His strength - business experience and knowledge of economics - receded. Instead, questions about his authenticity became the subtext of his candidacy. Romney was often offstride and defensive.

“There was a great deal of pressure to introduce yourself and create an awareness,’’ said Kevin Madden, the 2008 campaign press secretary who has an informal advisory role this time around. “A lot of what we did was get caught up in generating a hundred different headlines on subjects that failed to end up with an overall argument for his candidacy. It was a mosaic, not a message.’’

The Romney metamorphosis is the product of a rigorous and continuous process that began not long after his first presidential run collapsed after Super Tuesday in early 2008. He stumped for John McCain that fall and created a political action committee that underwrote a campaign-in-waiting and allowed him to campaign for Republican candidates in 2010, when the GOP took control of the House of Representatives.

Shortly before Thanksgiving in 2008, Romney met at his Belmont home with staff members and advisers who were the core of his unsuccessful candidacy. Out of that session came plans for Romney’s 2010 book, “No Apology: The Case for American Greatness,’’ which many consider the thematic underpinning of his 2012 campaign.

Most advisers stayed in touch and helped with the book - which was reissued in paperback this year with a new subtitle, “Believe in America,’’ ramped-up criticism of Obama’s stimulus package, and the disappearance of a line about his Massachusetts health care law that stated, “We can accomplish the same thing for everyone in the country.’’

While not disavowing the Bay State measure, Romney, in the face of withering criticism because it forms the template of President Obama’s national overhaul, has said it cannot be duplicated on a national level.

Writing the book was a critical exercise in self-examination, a trait that has defined his pursuit of success in public and private life.

“He’s a pretty tough self-critic,’’ said Mike Murphy, a political and media strategist on Romney’s 2002 campaign for governor who has had no formal role in Romney’s national campaigns.

The book is “heavy policy and answers a lot of questions about what Mitt Romney believes,’’ said Eric Fehrnstrom, Romney’s longtime spokesman and a senior adviser to the current campaign. “It provides grounding for the candidate and the campaign. It’s a useful tool for me. I go directly to the index and refer reporters to the appropriate passages.’’

In this campaign, Romney frequently relies on the book to defend his positions.

From the outset of this campaign, Romney has focused on job creation and the economy. He has mostly run on general-election themes against Obama, avoiding the day-to-day distractions of campaign coverage.

Fehrnstrom said both candidate and campaign have learned from the mistakes of 2008.

“The last time we got into this bidding war for high-priced political talent,’’ said Fehrnstrom. “It almost bankrupted John McCain’s campaign and it created a financial burden for Mitt Romney. We went out and hired as many people as we could get under the tent and it created a cacophony of advice that was not always unified.’’

Romney has come to terms with his strengths and limitations as a candidate, more than one adviser said.

His poll numbers have remained relatively flat during the turbulent period when some activists and major funders, worried about vulnerabilities of Romney - and more recently, late entrant Perry, governor of Texas - cast about for an ideal candidate to challenge Obama. None emerged, and with Christie’s Oct. 4 decision not to run and the Republican field now apparently set, the Romney campaign hopes to cash in on its steady-as-she-goes approach.

Ron Kaufman, Republican national committeeman from Massachusetts and a Romney adviser in both presidential campaigns, used a football analogy to describe the candidate’s maturation.

Brian C. Mooney can be reached at bmooney@globe.com.