He mocks plan from Rick Perry for state programs 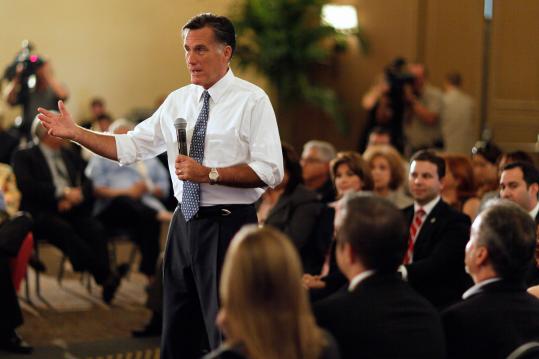 MIAMI - Republican presidential candidate Mitt Romney yesterday took his campaign pitch of saving - not savaging - Social Security to the pivotal primary state and retiree haven of Florida in a bid to stem the rise of rival Rick Perry.

With intensified talking points, an increasingly detailed prescription, and warnings about how brusquely and cavalierly Perry has dismissed Social Security, Romney sought to assure an audience of about 75 people that he understands the importance of the program in their lives and the importance of making sure its foundation is strengthened.

To that point, the former Massachusetts governor said he would gradually raise the retirement age and slow benefits for wealthy recipients.

The address kicked off yet another day of back-and-forth between Romney and Perry, offering a preview of a televised debate tonight that is expected to continue drawing out contrasts between the two, who are currently atop the polls, as well as the rest of the field.

Social Security has become a defining issue between the two. In the last two debates, Romney pressed Perry to explain his contention that the program is “a Ponzi scheme’’ and a “monstrous lie’’ for future generations.

Yesterday, Romney mocked Perry’s suggestion to turn the 76-year-old federal retirement program over to states. As he did, the large projector screens switched to a new message: “Six Questions to Ask Rick Perry About His Social Security Proposal.’’

Romney’s visit to Florida comes ahead of a crucial period in the Republican presidential contest. In addition to the debate tonight on Fox News Channel, the candidates will address a conservative conference in Orlando tomorrow and be the subject of a straw poll on Saturday.

Social Security is likely to play an increasingly large role, particularly in a state whose retirees tend to vote in higher numbers than the rest of the electorate.

Perry’s campaign responded to Romney’s comments almost immediately, tagging the former governor a “liberal’’ and saying he was simply trying to scare voters into supporting him.

“Mr. Romney is again sounding like a Democrat, distorting the truth and trying to scare senior citizens,’’ Ray Sullivan, the Perry campaign’s communications director, said in a statement. “As he has so many times in the past, Mr. Romney seems to forget he’s a Republican.’’

Romney has sought to use their differences on the program to cast the Texas governor as outside the mainstream and unelectable in November 2012. He expanded on that yesterday.

“It’s one thing to get the base of our party,’’ he said. “I want to have the base firmly and solidly behind me and my vision of believing in American and in American principles. But I also want to get independents and women generally and a lot of Democrats to say, ‘Yeah he’s a pretty good guy, too.’ That I’ve got to do.’’

And as evidence he could work with Democrats, Romney referred to his weekly meetings at the Massachusetts State House with Democratic lawmakers.

It was Romney’s first town-hall-type address in Florida, a state poised to be one of the early-voting states in the Republican primary. Also, Florida is hosting next year’s Republican National Convention and will again be a major battleground in the general election.

Matt Viser can be reached at maviser@globe.com

Poll shows Romney has widened his lead in New Hampshire

Rick Perry may have jumped to an early lead in national polls, but he trails far behind Mitt Romney in New Hampshire, where the former Massachusetts governor has added to an already commanding lead in the first-in-the-nation primary, according to a new Suffolk University/7NEWS poll.

The poll indicated that despite Perry’s sudden burst onto the national scene, Ron Paul and Jon Huntsman stand a better chance of emerging as Romney’s chief rival in the Granite State.

Romney holds a 27-point lead in New Hampshire, with support from 41 percent of likely voters, up from 36 percent in June.

Paul, the Texas congressman, is in second place with 14 percent, followed by Huntsman, the former Utah governor, with 10 percent. Both men have picked up 6 percentage points, signs of life for their campaigns.

Perry, the Texas governor, is in fourth place, backed by just 8 percent of those surveyed.

The rest of the field is also polling in the single digits.

Former Alaska governor Sarah Palin, who has not entered the race, is at 6 percent, followed by Representative Michele Bachmann of Minnesota at 5 percent and former House speaker Newt Gingrich with 4 percent.

The telephone survey of 400 likely voters was conducted from Sept. 18 to Sept. 20 and has a margin of error of plus or minus 4.9 percentage points.

Despite criticism that he is too wealthy and wooden to connect with workaday voters, 68 percent said Romney “is comfortable around regular people.’’

And though Romney has been criticized as a flip-flopper, respondents were more likely to say he, and not the tough-talking Perry, will say what he believes, even if it is unpopular. They even said they would rather have a beer with Romney than with Perry, 49 percent to 29 percent. (Romney does not drink alcohol.)

Paleologos said he was surprised by Perry’s relatively low numbers.

“He’s not their first, second, or third choice,’’ Paleologos said. “It may be New Hampshire just thumbing its nose at the rest of the states because this is a pretty pronounced lead, and to put Ron Paul and Huntsman in a better place in this poll is a powerful statement.’’