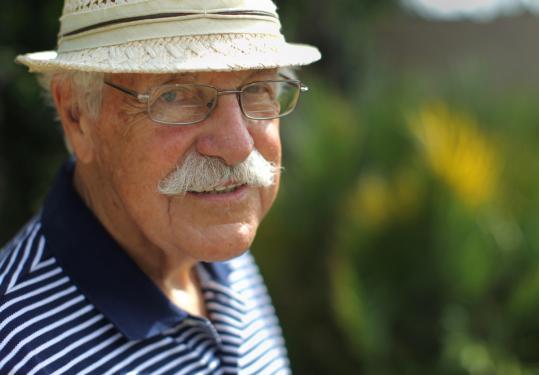 THE VILLAGES, Fla. - On a typically sunny day here recently, Edmond Voloka and David Dodd hopped into their golf carts and headed to the local Dunkin’ Donuts. They sat outside, coffee in hand, and commiserated about the economy.

Voloka, 81, has seen the value of his home fall nearly 40 percent over the last two years. Dodd, 78, after losing nearly 40 percent of his money in the stock market, put it into a standard bank account that earns no more than 1 percent interest.

Retirees’ concerns will be on the agenda at 8 o’clock tonight as GOP presidential candidates gather in Tampa for a debate, and again in Orlando on Sept. 22. The Florida focus will continue into next year, when the state hosts the Republican National Convention.

Florida is crucial territory - it awards the third-most Electoral College votes - and senior citizens are undisputedly the pivotal voting bloc.

Right now, those citizens appear torn between the pragmatic politics of Mitt Romney and the brash, pointed rhetoric of Governor Rick Perry of Texas.

Romney’s campaign clearly feels the issue of Social Security - a program Perry has called a “Ponzi scheme’’ - will become a treasure trove for him in early-voting states such as Florida.

But based on more than two dozen recent interviews in the Villages, a Central Florida retirement community known for its political and physical activism, it is unclear how the issue will play out. Many in the so-called Greatest Generation, which has been marked by its sacrifices, say they are willing to accept changes to long-popular entitlement programs.

“There’s this perception that retirees are not willing to deal with Social Security and Medicare cuts,’’ said Rae Aliquo, an 80-year-old retired real estate broker who relies on both programs. “Well, I certainly am. . . . If we have to cut, that’s OK. We understand.’’

The early states are already being handicapped for certain candidates: Iowa voting will be dominated by social conservatives who will probably favor Perry or Representative Michele Bachmann of Minnesota; New Hampshire is quite literally in Romney’s backyard; and South Carolina has a preponderance of Southern churchgoers who Perry and Bachmann can best attract.

Florida, long a swing state in general elections, is taking on a bigger role in the Republican primary this cycle. Not only will Republicans hold their convention here, it is vying to secure the fifth spot in next year’s primary elections, to cast one of the most important decisions of the nomination.

Of all the early-voting states, Florida’s diversity and size will most closely resemble the country as a whole and test candidates’ reach - from the Cuban politics that dominate Miami, to religious conservatism in the northern parts of the state, to the affluence of Palm Beach.

But no group is more crucial in Florida than retirees, and nowhere is there a concentration of retirees as there is in the Villages, a mix of numerous communities about 45 miles northwest of Orlando and a popular stop for GOP politicians.

Home prices range from $65,000 to $1.2 million, and nearly everyone drives a golf cart - some decked out to look like retro Chevrolets and Bentleys, often with blue undercarriage lights - to get from their gated communities to the busy town squares. It’s not uncommon to see residents on rollerblades or carrying yoga mats.

“Politics is probably the number one topic of conversation,’’ said Rich Cole, president of the Villages Republican Club of Sumter County. “Number two is probably the beginning of football season.’’

The Villages are home to some of the most reliable voters in the state, and it is overwhelmingly Republican. Romney carried all three counties in the 2008 GOP primary. The eventual nominee, Senator John McCain, trounced Democrat Barack Obama in the general election.

A CNN poll released last month showed Perry leading nationally among those 65 and older, with 26 percent. Romney was next, with 20 percent, followed by Bachmann, with 11 percent.

Residents here said they were worried about what type of country they’re leaving to their children and grandchildren. Their faith in government was deeply shaken by the debt ceiling crisis, and now they have a blunt message for Washington: Grow up.

“This is probably as frustrated as I’ve ever been,’’ Aliquo said one evening as her contemporaries in the background danced the electric slide at a town square. “I just want them to have a plan, and work the plan. There’s no leadership, and no direction.’’

A registered Republican, she voted for Obama in 2008. She’s looking at the current slate of Republicans and, like many here, is still undecided.

Many seniors said they are ambivalent about the former Massachusetts governor and still uncertain about Perry’s recent rise to the national stage. Some said they liked Bachmann, but didn’t think she had done enough to prove she could beat Obama.

“Perry’s just going so evangelical and getting so much to one side already,’’ said Ray Andrews, 72, an Air Force retiree, as he ate lunch after his golf game. “I think Romney will be a better representative for the Republican Party.’’

“I think Perry’s been a good boost - but it seems like every time he opens his mouth, he puts his foot in it,’’ said Bill Loder, 67, as he sat outside one night drinking beer and smoking cigarettes. “Romney has switched his positions too many times, and unfortunately politicians don’t get to change their minds like the rest of us.’’

Mike Quintavalle, a 64-year-old Navy retiree, stood by the pool recently, his swim trunks dripping after a water aerobics class as he proclaimed his allegiance to Perry.

Many residents were divided over several major issues confronting the Republican field.

Some say they agree with President Obama that taxes on the wealthy need to be raised to cut the deficit. Others say the wealthy pay enough, and the government would just find another way to spend the extra money instead of cutting the deficit.

Residents are also divided over any proposed cuts to Social Security and Medicare, federal programs that nearly everyone here relies on.

“The feeling is, ‘Keep your hands off Social Security,’ ’’ said Bern Janco, 80, a retired chemist who relies on Social Security for about half of his income. “It’s one of the things we’ve done a good job at.’’

But many said they would be willing to accept reductions, if that’s what it takes to get the country’s deficit down.

“We can adjust. We will adjust. Even if I have to go back to work, no problem,’’ said Stanley Over, who drives a golf cart with a sticker on the windshield that reads: “Hold their feet to the fire, WatchYourCongress.com.&#8217;’

“We all have a right to life, liberty, and happiness, but government doesn’t have to provide it.’’

Many retirees - the ones who will vote in droves - would almost certainly not be hurt by the changes. Only future retirees would feel the impact, and they are often less politically active.

A Washington Post-ABC News poll conducted in March found that nearly 60 percent of seniors are in favor of raising the retirement age, compared with just 35 percent of those between 40 and 64 years old.

But the overarching sentiment - among a generation that has lived through world wars and plenty of political strife - is a throw-the-bums-out mentality.

Marcia Butler, an ardent Republican whose husband, Al, is the local GOP county chairman, is nearly as mad at the GOP-led House as she is at the Democratic president.

“It’s not just Obama. It’s we shouldn’t elect these yo-yos either,’’ she said. “What happened to working together for my country. . . . We’re in America. We’re supposed to be bigger and better than this. ’’