In home neighborhood, disbelief; on Beacon Hill, sadness - and relief 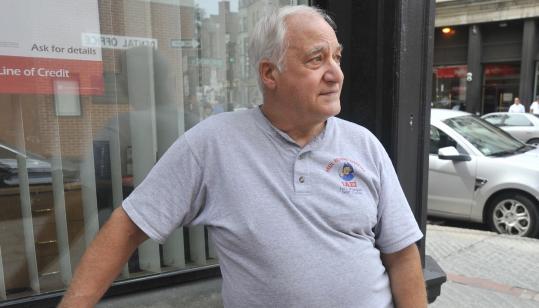 "I have mixed feelings about it. (Josh Reynolds for The Boston Globe)
By Brian MacQuarrie and Frank Phillips Globe Staff / September 10, 2011

In the North End where DiMasi grew up and lived, residents simmered with frustration that his punishment of eight years in prison on corruption charges, in their view, exceeded the crime. But on the political turf of the State House where he once held sway, lawmakers expressed relief that a long, sordid saga of bribery and deal-making had run its course.

But just down the hill from the State House, they weren’t worried about the taint - they were worried about the man they knew as Sal. Along the crowded sidewalks of DiMasi’s neighborhood, the former speaker was characterized as a good man whose mistakes had been unfairly judged.

“I think that everything stinks,’’ said Joseph Giangregorio, 74, as he stood behind the counter of the Green Cross Pharmacy. “Sal was an honest guy. They should have taken the good and the bad and evened it out. He shouldn’t have been treated like that.’’

Few people in the North End expected the former House speaker, 66, to escape federal prison. But for many of his neighbors, the evidence that DiMasi profited from a scheme to send lucrative state contracts to a Burlington software company paled beside the work he had done on Beacon Hill.

“I know he’s done a lot of good things. I figured he’d get three years,’’ said Bob Venuti, 70, as he walked near Hanover Street. “I have mixed feelings about it. I’ve known him all my life. It’s a shame it has to end like that.’’

In Venuti’s view, DiMasi was punished for business as usual at the State House.

“Everybody up there does it. That becomes the norm up there,’’ Venuti said. “It’s wrong what they do. Change it!’’

The grand hallways at the State House where DiMasi worked for years - as a freshman legislator in 1979, a longtime chairman of the Judiciary Committee, a majority leader, and finally in 2004 as speaker - were quiet yesterday. Most legislators who were contacted did not want to speak publicly, keenly aware of the issue’s sensitivity and of the fact that DiMasi is the third speaker in a row to be convicted in federal court.

A public sense of guilt by association has haunted lawmakers who now say they hope to move from under that cloud. Indeed, the discomfort DiMasi created in the House, drawn out over years of investigations into his activities, the indictment, and the trial, had demoralized much of the Legislature.

“There is not the slightest doubt he cast a shadow on all of us. I was slow to recognize Sal’s shortcomings,’’ said state Representative Jay Kaufman, a Lexington Democrat and onetime DiMasi ally. “I guess I erred on the side of trusting him.’’

Still, legislators expressed sadness at DiMasi’s fall and the prospect of years in federal prison for a once-gregarious, back-slapping politician who appeared crushed this week, begging a federal judge for mercy.

And some praised him for work on important issues. “We and the nation owe him for his leadership on health care reform,’’ Kaufman said.

North End residents, too, said they worry about the welfare of their well-liked neighbor.

At his family-owned pizzeria, Ralph Umberto took a break from handing out slices to a line of lunchtime customers. “To me, he’s a nice guy, and I hope he weathers it OK,’’ said Umberto, 54. “Eight years is kind of a long stretch, but what are you supposed to do? It’s up to the judge.’’

Elsewhere in the neighborhood, conspiracy theories were plentiful. In one, DiMasi was the victim of deep-pocketed lobbyists with whom he had clashed because of his opposition to casinos. Others suggested he was fated for a long sentence because of the previous corruption convictions of Dianne Wilkerson, former state senator, and Chuck Turner, former city councilor. Both are African-Americans and many had been watching to see if a white political leader would pay the same price.

But Michael Letichevsky, 67, a North Grafton resident who visited the North End yesterday, offered the kind of criticism that few who lived there would.

“He deserved 12 years,’’ Letichevsky said, referring to prosecutors’ recommended sentence. “Corruption is corruption. Are you honest or are you corrupt? Do you know the laws or don’t you know the laws? If you do, abide by them.’’

To many longtime residents, however, DiMasi’s fate was simply a cause for sadness.

“I met him at 12 o’clock at night,’’ only hours before his sentencing, said Fernando Giangregorio, Joseph’s brother and co-owner of the Green Cross Pharmacy. “He was walking his dog, and I was walking my dog. He seemed calm. He wasn’t upset. But you could see that he was not the Sal of the old times.’’